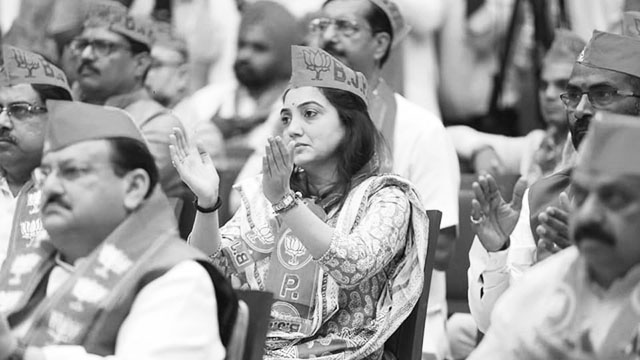 Nupur Sharma stirred a hornet’s nest by derogatory remarks on Muhammad the Prophet’s marriage with a nine-year-old Bibi Ayesha, a revered figure in Islam, during a television debate hosted by Times Now’s notorious Hindutva fascist anchor Navika Kumar on May 27th. Jindal tweeted similar derogatory remarks on Muhammad the Prophet. However, until June 3rd, no major protests took place in India.

While the BJP overlooked the outrage in India, the international outrage in the Muslim-majority countries caused extreme ignominy. While Qatar raised the first eerie alarm on June 5th, especially when Vice President Venkaiah Naidu was visiting Doha as part of his nine-nation tour, other Gulf countries also joined the bandwagon.

The Ministry of External Affairs started frantic diplomatic firefighting to douse the fire and labelled these two BJP officials as “fringe” elements, distancing the ruling party and the government from their views. The BJP issued a letter stating that it “respects all religions” and announced the suspension of Sharma and expulsion of Jindal.

Following a week-long hullaballoo, when the Muslims started protesting on Friday, June 10th, all over the country demanding the arrest of Nupur Sharma, who had apologised for her remarks using a tweet, they faced state violence in Jharkhand and Uttar Pradesh. Macabre police atrocities were unleashed on the protesters by the state governments.

Though Jharkhand is an Opposition-ruled state, the police firing in the capital Ranchi killed three Muslim teenagers participating in the protest rally. The angry mob resorted to stone pelting to resist the police attacks on them. The Jharkhand government’s endorsement of such state violence raises questions about its opposition credentials.

In Uttar Pradesh’s Prayagraj (Allahabad), apart from brutally unleashing violence against those who rallied demanding Nupur Sharma’s arrest, the police also tortured the accused in the lockups, blatantly violating their human rights, and the state also demolished the purported “illegal” constructions of the “accused” by violating their constitutional rights.

In Trinamool Congress-ruled West Bengal, while several Muslim organisations called for protests and there were roadblocks and rail blockades in Howrah district as well, sporadic incidents of violence were reported from the district, where the state has suspended internet until Tuesday, June 14th. There has been a concerted effort to vilify these protests using Islamophobic propaganda.

The situation has not normalised as the BJP government, despite police complaints in states like Maharashtra, refused to arrest Nupur Sharma for her derogatory remarks against Muhammad the Prophet. Rather, the Hindutva fascist camp is trying to use the occasion and the outrage to pave the way for a blasphemy law in India.

Vishwa Hindu Parishad (VHP), a militant outfit affiliated with the Rashtriya Swayamsevak Sangh (RSS), has demanded a law against blasphemy to prosecute those who make derogatory comments against any religious symbol or character, which the RSS’s proxy Muslim organisations may support. If such a law comes into force, it will further curtail Indian people’s right to free speech.

Even if Nupur Sharma is arrested for her remarks, the RSS will use it as a pretext to clamp down on any criticism against its Brahminical oppression and structural violence against the minorities, labelling them as blasphemy. This will enable the Modi regime to suppress India’s fight for secularism and democracy with extreme ease.