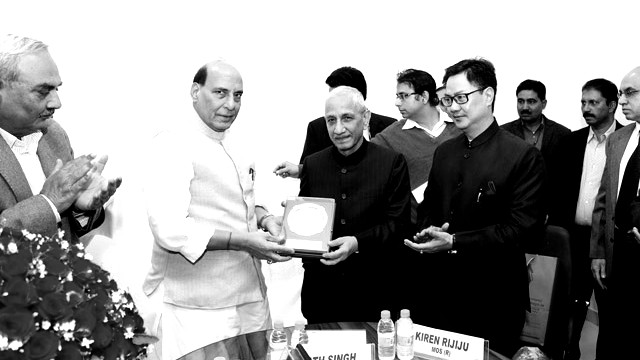 The interest of New Delhi in resolving the Kashmir issue, which is essentially an issue of a forceful military occupation over a people who wants freedom for themselves, is as much that a wolf has in eating grass. The recent appointment of former IB chief Dineshwar Sharma as the interlocutor of New Delhi in Kashmir is another instance of how Indian ruling classes want to prolong the pain and suffering of the Kashmiri people by offering them utterly useless baits to hoodwink and divert them from their intense struggle for freedom. On one hand the appointment of Dineshwar Sharma, who happens to be a hawk of the establishment himself, is shown by the mainstream corporate media and the parliamentary politicians from both ruling and opposition camps as a victory of those who seek political solution for Kashmir over a military solution, while on the other hand, the people of Kashmir, the organisations that are waging the struggle for Kashmir’s independence through democratic means, and the militants fighting armed battle, are viewing this move as just another exercise by New Delhi to fool the people of the valley and derail their struggle, which became intense since the killing of Burhan Wani in July 2016.

If we see the history of the Kashmir movement and the manoeuvre of New Delhi in response to it, then we will find out several such attempts made by the Indian ruling classes to fool the people of greater Kashmir by applying the “kick and kiss” formula of the British colonial rulers. The Rajiv Gandhi-led all-party delegation of 1990, the appointment of K.C. Pant as an interlocutor in 2001, the Kashmir Committee led by Ram Jethmalani in 2002 to discuss the Kashmir issue with separatists, N.N. Vohra’s appointment as Kashmir talk panel head in 2003, the appointment of Dilip Padgaonkar, Prof Radha Kumar and M.M. Ansari as interlocutors in 2012 and the subsequent refusal by the government to heed their advice, bears the testimonials of the government’s actual degree of seriousness on the Kashmir issue. The phrases like “Kashmir is an inalienable part of India” and all discussions within “constitutional framework” are those cliches that the ruling clique of India reiterates whenever they talk about dialogue with “all stakeholders” of the Kashmir issue, knowing well that the separatists and the militants even deny any sanctity to the Indian Constitution as it’s seen as a tool of oppression in the valley and not as a Holy book.  Apart from jargon mongering and providing fake and hollow assurances to the people of the valley, the Kashmir interlocutors have no actual reason to exist, that too on the money of the taxpayers.

Kashmir is a political problem – if this is agreed upon and if New Delhi has the real intention to resolve the problem – “without bullets or abuses, but by hugging the Kashmiri people”- as Narendra Modi claims, then it should have worked upon a real political solution by engaging the non-parliamentary opposition in the valley and even the militant outfits in a meaningful and comprehensive dialogue with a political emissary of New Delhi that would have been empowered to discuss things without concerning about the limitations of “constitutional framework” or the sentiments of the Indian people. The seriousness of the government could have been seen by its initial measures towards confidence building, the major among them would have been demilitarising the valley, scrapping of all anti-people draconian martial laws, releasing all political prisoners, prosecuting all war criminals in the Indian establishment and armed forces and by dismantling all torture chambers and allowing people to live their life with dignity.

But instead of doing anything like that, which could have really healed the wounds of the Kashmiri people to some extent and enabled them to trust the Indian government’s efforts, New Delhi axed its own fortune by carefully selecting an IB man, who represented a colonial-era, mostly despised political police wing, notorious for its anti-democratic actions and for its character of being a stooge of the government. The IB wrecked havoc in Kashmir, it cannot wash off its hands off the blood of the innocent Kashmiri men, women, children, who are regularly killed in the valley by the Indian occupation forces, because it’s one of the nodal agencies that provides extreme support to the forces and allows them to successfully run massacre operations on the streets. The IB’s hawks always aim to tear their political preys, the dissident voices within India that stand in support of the people of Kashmir. The former chief of such a reactionary, absolute government lackey, colonial fashioned organisation, who happens to be (probably coincidentally) an upper-caste Hindu, a hardcore RSS ideology supporter, can be anything but a sincere listener to the Kashmiri people’s woes. Rajnath Singh would have done better if he would have allowed his RSS colleague Ram Madhav, who is also a reactionary hawk, but overtly political, to lead the role than telling the media that he wanted to have someone on board who didn’t join any political party in his lifetime. Probably, Mr Singh, being the Home Minister, forgot that the RSS never calls itself a political organisation, but merely a “cultural organisation” in public.

Dineshwar Sharma’s efforts in Kashmir valley will buy New Delhi some breathing space at a time when it is trying hard to dispel the mass agitations and the power of its batons and bullets are wearing out severely due to the high temperament of the people and their self-elevation to the realm of fearlessness, which the Indian armed forces are not trained to deal with. Massacres aren’t cowing down the Kashmiri people, they aren’t afraid of pellets, bullets, grenades or tear gas and with their pebbles and stones, they are resisting the Goliath incessantly. At this juncture, when the government of Narendra Modi, who made hysterical claims before Hindutva mob on Kashmir, is losing badly a war that it intensified, there remains no other scope but to buy peace through a decoy, a lollipop. But will this hoodwinking measure succeed? Can the BJP and the RSS manage to fool the people of Kashmir again and dupe them to stay away from the streets for long? Can the Kashmiri people accept the killing on the streets and the drama of talks at the same time? Will the separatists and the militants trust a hawk whose work was to destroy their struggles earlier? Can Dineshwar Sharma prove his loyalty to New Delhi or show his love for the cause of people’s democratic aspiration? Only time will tell each of these answers linked with each other, but we can still smell the dish, though it’s still boiling in the pot, and we can assert that it’s not something unique or new, but the same old rotten vegetables getting cooked to be served in a new plate. Kashmir must decide its own fate because everyone else has their own dirty agendas.