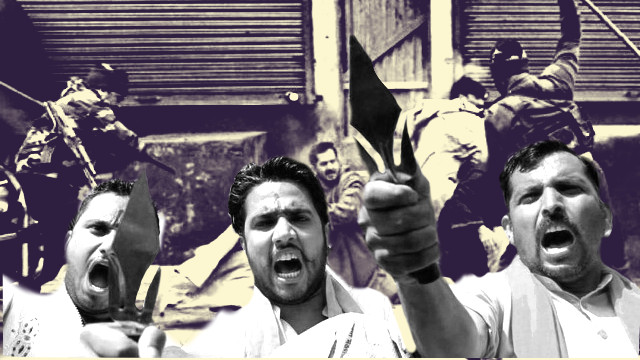 Jingoistic hyperbole always helps the BJP in garnering support during crucial elections, starting with the Kargil conflict that won Atal Bihari Vajpayee a five-year-long term in 1999 after his government delivered an utmost dismal performance from 1998 onwards. With the rhetoric of “nationalism” deployed into full play after a car bomb attack on a CRPF convoy in Kashmir’s Pulwama district killed 40 paramilitary personnel on 14 February 2019, Prime Minister Narendra Modi is also trying to accumulate votes from the urban, upper-caste Hindu, middle class and elites of India by spreading jingoism and xenophobia. The elections are at the corner and this militant attack has been more than a boon for the Modi regime than a bane it was supposed to be.

As the Information & Broadcast Ministry has issued a directive to tv channels to not air any content critical of the Modi regime’s policy following the blast in Pulwama, no one, including those who used to question the regime within limits, have raised any question regarding the government’s failure in preventing the blast on the highly-protected highway. Every news channel and newspaper owned by big corporate capital has published only that content which is in sync with the Modi regime’s endorsed line.

Even if we overlook the factor of Kashmir being a warzone and the militant attack taking place in retribution of Indian military’s brutal atrocities against the common people of Kashmir and its colonisation by the power of Indian guns, then too we will see a major failure or a goof-up, if we may  allege, on the part of the Modi regime that allowed this blast to take place.

Kashmir is the most militarised place on earth with the highest civilian to military ratio and the highest number of checkpoints erected to provide security to Indian troops operating there. The people of Kashmir have to go through numerous checks, stop and search and even home ransacking experience every day due to the presence of a huge contingent of heavily armed paranoid military force that considers them enemies. Whenever a vehicle passes through the roads or highways of Kashmir, they have to undergo several checking. It’s next to impossible that any vehicle can escape checkpoints in the course of its journey and reach a high-security zone unless there are behind-the-scene equations.

Whenever a convoy makes a journey, a road-opening party goes ahead of it to defuse any sort of IEDs planted on the road. The Indian Army also does a route sanitisation to ensure no hostile elements or threat exist on the route of the convoy. The same standard operating procedure (SOP) was followed when this 78-vehicle-strong juggernaut of India’s paramilitary force was ferried from Jammu to Kashmir through the Jammu-Kashmir Highway.

The Jammu-Kashmir Highway is one of the securest and heavily guarded highway by the Indian forces due to its strategic importance to New Delhi. The attacker (or attackers) purportedly rode an SUV laden with 350kg explosives through the heavily fortified Jammu-Kashmir Highway and then it passed through all checks unchallenged and hit its target travelling from the other direction, a really impossible incident. This plot is really very unconvincing and smells foul if it’s closely analysed.

Fortification of roads and strategic locations are key to India’s strategic military domination over the colonised Kashmiri people. The presence of multiple checkpoints helps in stopping untoward incidents through rigorous checking of the locals. It’s impossible for an SUV to pass out through checkpoints or the sight of the military when it was travelling on the highway. Also, it’d be impossible for the SUV to simply cross the divider of the road and travel on the wrong side to hit the convoy unless it had waited for the convoy at some point or had travelled on the wrong side undetected for some time to confront its target, which is highly unlikely.

Moreover, the incident having a local militant’s involvement was blamed immediately on Jaish-e-Mohammad and Pakistan, no primary investigation was done by the government but a claim made on the internet was accepted as Gospel’s truth. Within hours of the attack, the mainstream media and the Modi regime started blaming Pakistan and the Jaish-e-Mohammad but no one asked them for the evidence. It looked like the government and its agencies are trying to shift the blame of their own intelligence failure and lack of checkpoint vigil.

The largest militant organisation working independently in the valley is Hizb-ul-Mujahideen. Other outfits like Jaish-e-Mohammad, Lashkar-e-Taiba, Al-Badr, etc, have been reduced to non-existent in the valley as per government claims. The Modi regime also boasted on its “achievement” of gunning down the maximum number of people in the Kashmir valley ever since it came to power. The military establishment also claims that cross-border and inter-LoC infiltration is reduced significantly through a significant vigil. They even claim that militant recruitment is at an all-time low, though the observers of the valley claim otherwise.

In such a situation, how could a waning and virtually non-existent organisation like Jaish-e-Mohammad muster the courage to launch such a large-scale attack and arrange the logistics for it in the fortified valley? It’s not an easy task to arrange such a huge quantity of explosives and plan out an attack on a troop convoy whose prior information is shared with none but only the military establishment. Can anyone execute such a well-planned attack without the connivance and active support of the establishment? This wasn’t an attack on a soft target but the CRPF itself, which itself shows a lot of planning was actually done in advance and definitely the militants were certain about the troop convoy that they could target them.

It’s obvious that in the run-up to the election, the Modi regime will use Pakistan and the Muslim community as punching bags to evoke deep xenophobic feelings among its core support base. The frantic war cry by the Modi fans would result into another fake “surgical strike” and another round of market “patriotic” films will be directed by Modi’s sycophants to build-up mass opinion in favour of the Hindutva fascist’s second term. The mainstream media will not question the regime and will desist from calling a spade — a spade.

Questioning the military establishment and the government’s defence-related standpoints have been considered taboo in India. The Indian ruling classes demand obeisance and subordination towards the supremacy of an unaccountable military establishment from the people of the country, which is still called a constitutional republic with a parliamentary democracy that is boasted as world’s largest.

Now is the time that the people ask tough questions to the Modi regime about the performance of the very military establishment for which it allocates the lion’s share of the union budgets; even more than what’s allocated for public health, education or employment generation. It’s time that the people ask the Modi regime to stop its “patriotism” drama and answer the people on the Rafale Jet Scam. It’s time to demand a total end of bloodshed and military occupation in Kashmir and to allow peace to prevail in the valley.

For allowing real peace in Kashmir and to empower the Kashmiri people to democratically decide on their own fate, the real owners of India, ie the poor farmers, workers and toiling people, who are more than 80% of the total population and contribute to the wealth of this country through their back-breaking labour, wage an uncompromising struggle against the utmost “anti-national” Modi regime and its patrons — the big foreign corporations, Indian comprador and crony capitalists, and feudal landlords — who have played a decisive role behind the bloodshed in Kashmir. It’s only when this 80% of the population will win power, empower the society and democratise India that peace, prosperity and unity will prevail in India. Any talk of that before the people win power is actually an attempt to hoodwink the masses.