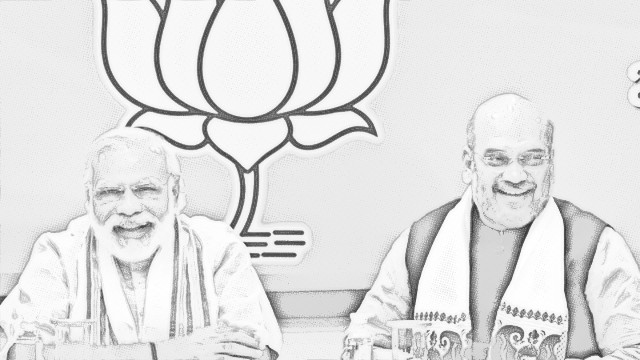 Indian parliamentary democracy is hailed as a hallmark of exceptionally successful post-colonial democracy that was built by adapting a western template in a backward eastern country. Dr BR Ambedkar, the famous architect of the Indian Constitution, once said that “Democracy in India is only a top-dressing on an Indian soil, which is essentially undemocratic.” Termed as a sacrosanct system by the ruling classes and immunised from criticism for decades, the ageing outer layers of this sacred democracy, which worked as a chimera for the rulers, are falling off rapidly, revealing the grotesque hollow core, which is frightening even its hitherto vocal supporters. The rotten corpses of so-called democratic ethos and values have become quite unbearable for those who have been pulling them on a rickety carriage to hoodwink the masses.

The mendacious democracy, coated with scrumptious layers, is vociferously manifesting its dreaded reality with the rise and rise of Prime Minister Narendra Modi and the Hindutva fascist order led by his Bharatiya Janata Party (BJP) and its ideological mentor the Rashtriya Swayamsevak Sangh (RSS). The corpse of democracy is mocking itself by stripping in public and the ruling classes aren’t crying foul any more because they’ve no intention to retain this obsolete chimera, rather they’re eager to replace this dilapidated democratic superstructure with a versatile Hindu Rashtra – a tyrannical state with the official theological dictatorship exercised by the Brahminical feudal-comprador forces. Modi and his RSS brethren are obediently following their masters’ command.

Though the culture of switching political allegiance has been an integral part of Indian politics for decades, it became industrial in scale ever since the Modi regime was first formed in 2014. Modi’s ascension to power was preceded and followed by a large number of political stalwarts from the Congress party and other opposition parties either joining the BJP or becoming its partner-in-crime by forging an unholy electoral alliance with it. Under Modi’s rule, with his close associate Amit Shah leading the BJP, poaching opposition legislators or leaders became the dominant strategy to increase organisational outreach and legislative weight of the BJP, even in states where the party was a non-factor earlier.

The BJP under Modi-Shah bought the entire fleet of opposition members of legislative assembly (MLA) in Tripura before the 2018 assembly election to become the principal opposition party in the state where it never had any organisational dominance. The party bought the members of the Biju Janata Dal to increase its own organisation in Odisha. In Assam, Himanta Biswa Sarma and other big Congress leaders were poached by the BJP before the assembly election using the Central Bureau of Investigation’s (CBI) inquiry into the infamous chit fund scam to budge them.

The CBI was also used to fracture the ruling Trinamool Congress (TMC) in West Bengal. A prominent TMC leader and its co-founder Mukul Roy, joined the BJP to save himself from CBI interrogations and is also playing a pivotal role in poaching the TMC’s existing MLAs and councillors. Modi, during a speech at an election rally in West Bengal, claimed that 40 TMC MLAs are in touch with him, without caring about the anti-defection law. Roy unveiled the plan by inducting multiple notorious MLAs from the TMC into the BJP after the Lok Sabha election results were out.

While Bihar Chief Minister Nitish Kumar led his Janata Dal (United) back to the BJP-led National Democratic Alliance’s (NDA) fold citing his suddenly-awakened “conscience”, which is quite a volatile one as it once asked him to quit the NDA in 2013 following Modi’s selection as BJP’s prime ministerial candidate, the Karnataka leaders of the Congress and its ally, the Janata Dal (Secular), are struggling to save their coalition government as the BJP has splintered the alliance through its money power, resulting into a resignation spree by “rebel” (read sold out) MLAs. Vocal BJP opponents like Alpesh Thakor of Gujarat joined the BJP recently, probably hearing the call of his conscience that once motivated him to criticise the same party vehemently.

Though the series of such volte-face continues unabated, there is nothing that matches the spectacular somersault show of 10 Congress MLAs in Goa, including the former leader of opposition Babu Kavlekar, who joined the BJP one fine day. In the 40 member Goa assembly, the BJP managed to win 17 seats on its own in the 2017 assembly election. The Congress party won 15 seats, while the Goa Forward Party, which fought the election on an anti-BJP pitch, won three seats. An RSS offshoot, Maharashtrawadi Gomantak Paksha, won one seat, while two seats went to independent candidates. The Goa assembly election was actually a poll drubbing for the BJP and its former chief minister Laxmikant Parsekar, who had to resign due to his unpopularity.

Yet, Shah managed to form a government by stitching an unusual alliance overnight by bringing the Goa Forward Party, Maharashtrawadi Gomantak Party and the independent MLAs together. A large sum of money and promise of cabinet berths were involved in the deal brokering. Leaving the Congress party absolutely stunned, the BJP formed the government in Goa under the leadership of late Manohar Parrikar, even though the verdict went against it. Realpolitik had an upper-hand against the so-called democratic values and ethics.

The Goa Forward Party’s Vijai Sardesai, who once enjoyed the deputy chief minister’s position despite having three MLAs was thrown out of the cabinet along with his MLAs overnight, as the BJP managed to increase its strength to 27 in the house, thanks to the MLAs jumping off the Congress’s sinking ship. Left dumped, Sardesai and the Goa Forward Party could merely moan in pain and complain about political betrayal, forgetting how his party betrayed the people by joining hands with the BJP.

This exercise, this sudden switching of allegiance by 10 legislators using the subterfuge of “development”, actually exposed how the practice of political poaching has been legitimised by the BJP under Modi-Shah. No one knows where their members of parliament (MP) or MLAs will switch tomorrow, no one knows how the BJP will tamper with the Anti-defection law and make arrangements in opposition-ruled states like Chhattisgarh, Kerala, Madhya Pradesh, Punjab or Rajasthan in the days to come.

The BJP has the highest amount of corporate donations in its coffers. The massive money laundering done during Modi’s infamous demonetisation exercise helped the party become the richest one in the country. Now the same dirty money is helping Modi-Shah to go on a shopping spree, buying MPs, MLAs to Panchayat members at the grassroots. The more they buy the more they acquire power. The opposition Congress party, which was once the master in buying MPs and MLAs, couldn’t reach this stage of perfection with which the Modi-Shah duo operates.

The public, bamboozled by such development, has no other option but to vote for the BJP, as it won’t make much difference if they elect someone else with massive votes because at the end of the day, each MP, MLA or other representatives have a price, except a few who won’t sell themselves or are not worthy to be bought, and it’s only the BJP that can pay the price and trigger an acrobatic feat, quintessential of Indian democracy. Thus, it’s a single-party authoritarian rule, where elections are ritualistic and loyalty is excessively fluid, making the attempt to vote for any credible opposition candidates a futile affair.

In the long-run, the BJP is actually helping the anti-fascist, democratic and progressive forces by revealing the hollowness and inefficiency of the present parliamentary system in resisting or defeating the Hindutva fascist juggernaut that’s keen to sell the country, its resources, land, forest, water and labour to big foreign and domestic corporations. The parliamentary forces have fluidity in terms of ideological commitment and can turn to any fascist power in return for a stable career and financial growth. The hypocrisy of such parliamentarians reinforce the accusations levelled by the communists against the institution of parliamentary democracy for years. It also nullifies the claim that forging parliamentary alliances can protect the interests of the exploited people or resist the Hindutva fascist bandwagon, as seen in the case of Karnataka, where the alliance government is wobbling and is at the verge of an inevitable collapse.

There can’t be any cosmetic concealer to undo the reputation damage suffered by Indian parliamentary democracy since the last many decades, especially after the Indian ruling classes embraced the neo-liberal economic order built by the US imperialism’s docile tools of neo-colonisation like the World Bank, the International Monetary Fund, and later the World Trade Organisation. As the neo-liberal economic order captivated politics, as the state turned into a mere facilitator for the growth of big corporations by providing them access to resources through privatisation, and divested all its social welfare responsibilities, while retaining the monopoly over brutal military prowess to subjugate the discontented poor people, the parliamentary democracy became an extended battleground for big corporations fighting over the control of the economy and the economic resources. Which of the corporate houses will become the unchallenged rulers of India? Which of the corporate houses will be deposed from the high seats of power? Parliamentary politics has become the perfect arena to resolve these questions.

As the BJP is empowered with the support of the big corporate houses, both foreign and Indian, it’s indeed the unchallenged contender for power and no other political parties can cope up with it in terms of funding, organisational strength and desperation to wipe out political rivals. In its pursuit of absolute power, the BJP and the RSS have done what the Indian ruling classes have desisted so far from doing – exposing the real character, the shallow depth of the Indian parliamentary democratic mire. The circus that was celebrated so far as sacrosanct is now ridiculed and mocked by the people citing Modi-Shah’s money bag policy. The faster this mirage, this decoy, crumbles before the eyes of the common people – the working class, the peasantry and the toiled people – the faster the myth of changing the system from within can wither away.

The Goa episode has gone too far to show the common people that whoever they may elect as their representatives, at the end of the day it’s the moneybag that will rule. This realisation will definitely drive a lot of people away from the trap of parliamentary opportunism and the anti-fascist, democratic and progressive forces must tap this opportunity to awaken the masses and organise them against the menace of corporate loot and plunder perpetrated by the Hindutva fascist BJP under Modi and Shah. The moneybag politics of Modi-Shah, and the triumph of the BJP in buying legislatures to reverse mandates will, of course, lead to massive people’s resentment against Hindutva fascism and their anger will be channelised, for history will leave no other alternative, through massive struggles to uproot the source of this tyranny – feudalism, comprador capitalism and big foreign capital – to ensure a new, democratic and harmonious society is founded on the essential values like secularism and socialism. Only then can the realm of freedom becomes approachable for the common people, enslaved by the tyranny of capital so far.