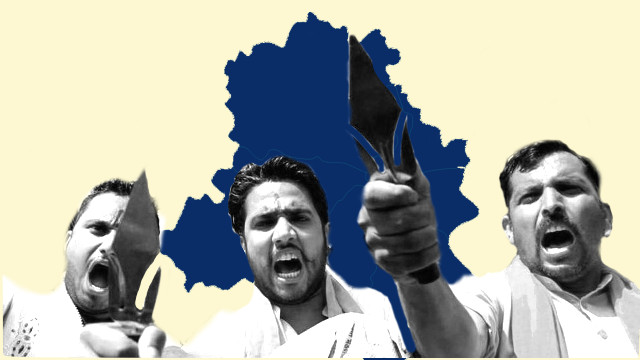 The state-sponsored anti-Muslim pogrom in Delhi is a trailer to what’s waiting for the 200-million strong Muslim community, which is 14% of the Indian population, under the Hindutva fascist reign of Prime Minister Narendra Modi’s Bharatiya Janata Party (BJP). Three Muslim men were killed in a secular state’s capital by a secular Hindutva fascist lynch mob. New Delhi’s Jaffrabad and Chand Bagh areas are being torched by Hindutva fascist goons who are affiliated with the Rashtriya Swayamsevak Sangh (RSS) — the parental body of the BJP. They have set ablaze the Muslim households, shops, vehicles and markets. Two storeyed buildings are burning while the Delhi Police has been targeting Muslim youth, and also pelting stones and supporting the Hindutva fascist thugs.

The optics of this state-sponsored anti-Muslim pogrom in Delhi has shocked the conscience of the country. In the Bhajanpura area, Muslim Dargas are set ablaze. One man with a skull cap in this area was brutally beaten by the RSS goons with sticks and iron rods. The man was dragged down on the ground, his dress was torn while he bled for hours as his head was smashed. Goons here repeated the pattern of Jamia Millia Islamia attack. Wholescale attacks were unleashed on Muslim people who were dissenting their voice against the contentious Citizenship (Amendment) Act, 2019 (CAA) and the National Register of Citizens (NRC).

While US President Donald Trump toured India at his “friend” Modi’s call, the majority of the toady press was busy showing the silver plates for his gala dinner when a part of Delhi, 22 km from the Rashtrapati Bhawan, was burning. Due to alternative sources and footage of media people are getting to know that the porches, terraces, windows, clothes of Muslim households were burning at a point while civil society was busy making Tump-Modi’s ‘celebrated cartoons’.

This state designed inferno might lead to loss of many poor Muslim lives if immediately the situation is not controlled by the state machinery,  which is currently occupied in welcoming the white guests of America as well as is in cahoots with the perpetrators of the violence. The newly-elected Aam Aadmi Party (AAP) government led by Arvind Kejriwal and its supporters are so far quiet on the state-sponsored anti-Muslim pogrom in Delhi. As there is an upsurge of Hindutva fascist ultra-nationalism in India, its allies have been trying to derive benefits from the agony of the poor Muslims. AAP is no different.

Though a lot of people in Delhi’s civil society have earlier propagated the AAP’s very idea of common people, ‘disciplined ruling’ and ‘nationalism’ prior the Delhi Assembly election 2020, they probably missed that be it softcore or hardcore, Hindutva fascism remains heinous in all its sizes. Since religious fundamentalism doesn’t count poor working mass but the ruling class, in India the anti-people Hindutva fascism became beneficial to only the big foreign corporations, their Indian crony-comprador allies and feudal landlords. The state-sponsored anti-Muslim pogrom in Delhi is eventually going to benefit the ruling classes, or else, they wouldn’t have allowed it for even a minute.

Why Muslims have to always pay for nationalism while they are forced to prove their patriotism with national flags in hands? Why always Muslims have to be quiet to prove peace at the point-blank?  As in Kashmir, forced silence is represented as peace, here too, the narrative is applying in a self-proclaimed secular state. This state-sponsored anti-Muslim pogrom in Delhi is like another version of the  2002 Gujarat pogrom, in which thousands of Muslims were killed in broad daylight to pave way for Modi’s rise. Since industries have mostly closed due to capitalism’s extreme crisis, and the rest have been transformed into export hubs, the working mass of this land has been turned to cheap labour to produce first world’s luxury.  How come this land, full of resource beneath our feet and the bounty of nature has been going through a stringent economic crisis? Do the majority of people ever assert on this question?

This land has been stolen and plundered repeatedly by the white imperialist goons like Margaret Thatcher,  George W Bush, Barack Obama and now Trump. They aren’t satisfied with what they got as cheap labour, resources and a vast market lure them to obliterate all forms of official barriers and gain absolute control over India. This is why the old Indian state that wore a liberal-democratic outfit, despite carrying extreme Islamophobia and bigotry in its heart, was replaced by a sheer fascist state that’s shamelessly exhibiting its bigotry to the world, enjoying the patronage of an Islamophobic Trump-led US imperialism.

The Indian state and Hindutva fascism are in an unapologetic nexus today. To shut the anti-CAA-NRC protests in Delhi, to recapture the streets of the capital and crush dissent of all forms, the Hindutva fascist state’s goons and the RSS stooges resorted to this state-sponsored anti-Muslim pogrom in Delhi so that fascist Trump could easily gauge the potential of proto-fascists on ground who would be needed in near future to make cheap labourers out of poor working Muslim and Hindus.

Thus, we need to come together to immediately stop the state-sponsored anti-Muslim pogrom in Delhi, which the RSS-BJP started to satisfy the US monopoly and finance capital immediately and take forward the language of the unity of the oppressed. Now it’s time to know whether our nationalism stands with Trump and Modi or the working Muslim masses who create the real wealth for the society.