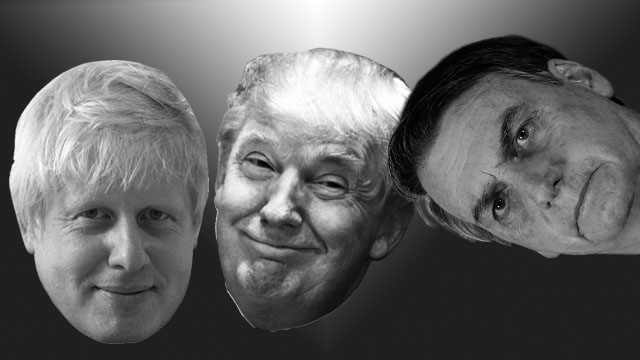 Right-wing populism has globally hegemonised the political terrain. It has destroyed the strength of secular-socialist forces through its hydra-headed and diverse ideological network. This article attempts to delineate this hybridised coordination of power by showing how right-wing populism has not merely stamped its domination on the global populace but has instead crafted new modalities of subjectivation.

These new techniques of power resemble familiar Orwellian tactics which involve a complex and conflictual process of re-definition and inversion of sedimented logics. The first section of this article will use the slogan “Freedom is slavery” to understand right-wing populism and the second section will use the slogan “Ignorance is Strength” to further obtain a precise picture of this phenomenon.

It is a well-established proposition that right-wing populism dovetails immaculately with neoliberalism. Both these regressive conceptions share the same structural features. The important stratagem of dichotomous distinction is present in both of them. In neoliberalism’s case, the “free market” is contrasted with the “planned economy”.

Here, the free market has to be awarded all the fulsome praises one can find. So, free market always conjure in our mind the picture of unhampered animal spirits which merrily liberate the oppressed people from the totalitarianism of socialism or command economy. On the other hand, socialism has to condemned with the most caustic and icy adjectives. Hence, the market fundamentalists associate authoritative command, chaos and stifling regulations with socialism.

Through the use of the adjective “free” with the market, the whole concept of freedom has been deliberately inverted and obscured. All people are now genuflecting to the Market God which has helped the world’s richest 1% to own 44% of the world’s wealth. By complying with free market fundamentalism with slavish submissiveness, people all over the world are allowing the right-wing populists to entrench crony capitalism and further privatise everything.

A frightening development in the UK is the extremely right-wing and market fundamentalist cabinet, which has been appointed by Prime Minister Boris Johnson. Fourteen members of Johnson’s cabinet (including the home secretary, foreign secretary and chancellor) have been actively associated with the initiatives of the Institute of Economic Affairs (IEA). IEA is situated in Tufton Street, which is the nucleus of right-wing pro-Brexit think tanks.

The IEA is the main British partner of the US-based free market umbrella organisation called Atlantic Network. Other partners of Atlantic Network include the Taxpayer’s Alliance, Centre for Policy Studies, Adam Smith Institute and Civitas, all of which are located in the Tufton Street network. Tufton Street network has received $5.6 million from unidentified US patrons since 2008. The Brexit lobby is also heavily influenced by Atlas Network, Koch Empire and Exxon Mobil (it is the largest financial benefactor of climate science denial). This heavy influence of American fossil fuel corporations and free market groups evinces that there exists a Trumpist arrangement of lobbying. This lobbying arrangement is trying to dismantle democracy in the UK in order to secure the entry of American capital.

The free market is promoted to achieve the underhand dealings of capitalistic honchos like Johnson. Through the myriad free market think tanks, the people are being compelled by the organs of informational autocracy to construe the slavery of the free market as freedom. The Market God is not only destroying democracies, but it is also causing unprecedented ecological damage.

Jair Bolsonaro is a callous climate change denialist and is the epitome of an insensitive right-wing demagogue. The basic electoral promise of Bolsonaro was that he would assiduously and efficiently exploit the Amazon. This promise has been fulfilled by Ricardo Salles (Brazilian environment minister) and the president of Brazil through the Amazon rainforest fires in which they played a significant role.

These fires were caused by Bolsonaro’s strategy of saving the forest by transferring them to corporations. Farming and ranching interests in Brazil are dominant factors and the agribusiness sector is a crucial backer of Bolsonaro, which is why he is an evangelist of the free market.

Brazil’s minister of the economy, Paulo Guedes, is himself a firm believer in the invisible hand of the market and has enough credentials to prove that he is truly a free market fundamentalist. He has studied from the University of Chicago, placed an unwavering faith in the Chicago School of Economics and has been taught by the most glorious market fundamentalist and Nobel laureate, Milton Friedman.

As a result of all these, he is pursuing aggressive neoliberal reforms and is planning to “open” the economy. This opening up will allow the feral forces of corporate globalisation to plunder the resources of Brazil and will exponentially increase the wealth of the elitist echelon. As long as these free market regiments continue to patrol the world, freedom will continue to exist as slavery.

The progress which humanity has made since Enlightenment is being overturned. Reason was a theme, which had great centrality in the Enlightenment period. Enlightenment was alternatively called the age of reason. But for the right-wing populists, reason is the biggest enemy of the people. Believing in it is a shameful sin and one should try to dissociate oneself from this execrable leviathan.

This feeling of procedural drabness is gradually extended to other spheres such as policymaking and the procedural pathogens such as discourse and dissent are purged from the domain of democracy. Instead of reason, ignorance becomes the unifying principle of nations and right-wing populists impudently display it as humanity’s biggest strength.

In the criminal justice system, right-wing populists have injected the raw sentiments of people and are trying to re-align it according to the popular opinion. This kind of strategy is called “penal populism”. Penal populism is an astute initiative which the Goebbelsian populists use to exploit the people’s rage. It is actually a superficial response to the crisis of neoliberalism, and it is important that we understand this phenomenon in its larger structural framework. The precariousness of the neoliberal age had correspondingly given rise to sentiments of anxiety, uncertainty and insecurity. The welfare state was being jettisoned, almost everything was being privatised and the periodical catastrophes of capitalism were devastating numerous livelihoods. People were increasingly expressing their resentment against the state which was interpreted as being anti-people.

It is in these circumstances, that right-wing populists rose to power and then milked these sentiments through measures such as penal populism. All these imbricating factors in the rise of penal populism have been articulated by John Pratt and Michelle Miao in their working paper entitled “Penal Populism: The End of Reason”. They propound that penal populism paints criminal justice system with emotional energy and by giving more emotive expressions of justice, it falsely shows that people are being better represented. Penal populism may seem like a tokenistic spectacle of justice which is quite unrelated to the people but it in fact, cements its support among people by providing them cold comfort in a hostile milieu of insecurity. Architectonic structures of rationality start disintegrating, and ignorance supersedes the vacuum created by the absence of reason when penal populism fossilises the people’s ill-informed opinions and intense emotions.

Bolsonaro has not shied away from forcefully asserting his penal populist policy. He has proposed a law which gives full immunity to those police officers and soldiers who kill someone for self-defence while they are engaged in a Guarantee of Law and Order mission. This is his sensational war on crime which sanctifies state-sponsored violence and allows the military personnel to casually murder anyone. After this bill comes into effect, Brazilians can expect some people to be suddenly “vaporised”. Bolsonaro has further energised the military unit’s hair-trigger temperament by blithely saying that this law will ensure that “criminals die like cockroaches”.

Apart from drawing some appropriate and exciting analogies, the president of Brazil is also infamous for his controversial statements which are slowly being normalised. He has boldly told the Brazilians that “a good criminal is a dead criminal”. He has also assured the people that if push comes to shove, he will certainly dig graves for criminals so that there won’t be a shortage of places to send criminals.

The natural result of Brazil’s homicidal dictator’s rhetoric is deeply alarming. Brazil has become an abnormally belligerent nation with the world’s most violent police force. Wilson Witzel, Rio’s governor, has smartly remarked that when suspects are confronted by police, they have to “surrender or die”. Most of the times, suspects are not even provided with the chance to surrender and this is becoming clear from statistical information.

The Rio police had killed 1,249 people between January and August 2019. This means that five people were killed every day. Bolsonarian criminal justice system butchers the established methods of justice which are based on reason and principles of rehabilitative justice. For right-wing populists, the reason is a sterile spirit and rehabilitative justice fails to include the irrational sentiments of people and is less pleasurable than retributive ruthlessness. Bolsonarian justice is ultimately apt for right-wing populists because it forcefully says that “ignorance is strength”.

Right-wing populists are also attempting to eliminate the essence of democracy which is the tradition of dialogue and deliberation and install in its place sheer ignorance. This is done by portraying discussion as an unnecessary hassle in the path of progress. The entire task of progress is seen as the sole responsibility of the leader who is touted as a strongman, capable of anything. Discussions are shown as hindrances in the strongman’s efforts to promote development. “Strongman phenomenon” does not only help in exterminating discussions, but it also helps in persuading the masses to exist as mere gung-ho consumers, over-zealous to passively accept the leader’s progressive policies.

In order to expedite the process of progress, these consumers have to vociferously support their leader’s policies and silence the critics who are trying to detract attention from the much-vaunted progress. In an illuminating article, Rajeev Bhargava tells us that when this happens, “Conversations are stalled, discussions disrupted, facts manipulated and distorted”. After all, this skulduggery, reason gets annihilated and the informational autocracy mechanically utters that ignorance is strength.