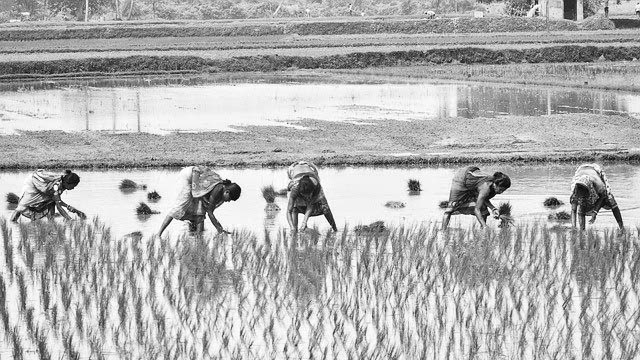 In 1991, when I was 12 years old and studying in the eighth standard in my village high school, the Congress party-led Central Government launched a set of new economic reform programmes. I vividly remember reading local newspapers, which carried news on the reduction of agricultural subsidies on seeds, fertilisers, electricity and irrigation. It also started dismantling the universal approach to food security and the public distribution system in India.

My father was an active farmer then and used to be the district leader of the Bharatiya Janata Party’s (BJP’s) Kisan Morcha but he supported liberalisation, privatisation and globalisation policies of the Congress party-led Central Government. He argued that these policies will bring an economic boom and there will be a trickle-down effect on all sectors of the Indian economy. The agriculture sector and farmers will benefit from such policies.

This was also the silent understanding of the BJP and its parent body, the Rashtriya Swayamsevak Sangh (RSS), but it made piecemeal opposition to the reforms led by the Congress party. The national and mainstream media heralded the new economic reforms as the best policy option for a powerful and developed India. The theological promise of neoliberalism is like deceptive salvation in Hindu religion.

As Prime Minister Narendra Modi’s government follows the footprints of the Congress party in implementing more ruthless neoliberal agricultural policy reforms, my father (my best friend) opposes these polices and he argues that corporatisation of agriculture will destroy the agricultural economy and take away farmers’ livelihood in the short run and their land, in the long run. Such a transformation of my father gives me hope and shows greater transformation waiting for India in political and economic terms. The democratic debate between the father and the son continues along with the farmers’ protest an authoritarian Modi regime.

Modi’s BJP-led government and his Hindutva henchmen are claiming that agricultural reforms are necessary to expand trade and investment in agriculture. The goal of the reform is to increase the wholesale agricultural market for the growth of agricultural exports. The Modi government claims that farmers will get greater freedom within the liberalised agricultural market and maximise their profit. It would result in a higher standard of living and higher quality of life for Indian farmers.

It is important to bust these myths propagated by Modi and his Hindutva bogey, funded by big corporate houses. These claims are blatant lies and agricultural reform policies are unsustainable. The Modi-led agricultural reform policies would make farmers vulnerable to market forces. The deepening of capitalist market forces has ruined agriculture, agricultural communities, farmers’ lives and livelihoods throughout the world. The market-led industrial approach to agriculture drives farmers out of business and reinforces agrarian crisis which forces farmers to commit suicide.

It destroyed the livelihood of small and medium farmers, rural communities and swallowed family farms in America. The corporations suppressed the price of the farm produce and increased its selling price. Both American producers and consumers suffer heavily due to such agricultural transitions. It also destroyed small businesses affiliated with agriculture in the US. The American farmers are fighting back to defeat corporate control over American agriculture, but the Modi regime is pushing the farmers to the same abyss of absolute crisis.

The European Union (EU)’s Common Agricultural Policy (CAP) has created a system in which the large farmers and landowners in France, Germany and the UK are the beneficiaries of its subsidies whereas the small farmers are marginalised. It has created a wholesale agricultural market where prices of agricultural products are different in different parts of the EU member countries.

The market forces create price fluctuation within the EU agricultural market and the small farmers face the brunt. The EU-led CAP has huge negative impacts on developing countries in Africa. The subsidised imported food, milk and poultry is destroying local production and markets of similar products in Africa. The big farmers and agricultural corporations in Europe are the net beneficiaries of such agricultural policies driven by market forces. These policies have ruined the rural communities and destroyed the livelihoods of small and medium farmers in Europe.

Therefore, the Land Workers’ Alliance is not only opposing the CAP but also demanding subsidies for small farmers and family farms in the UK. It is also strongly demanding the British government to exempt agriculture from all free trade agreements. Many European countries have also realised that industrial agriculture led by corporations destroy the environment. So, there are many social and political movements against the corporate takeover of agriculture in Europe today.

Many developed countries have witnessed the landgrab by the big corporations and big farmers with the growth of corporatisation of agriculture. The Congress party-led governments had started the policies of corporate land grab under the guise of Special Economic Zones (SEZs). After agricultural policy reforms, the Modi-led BJP government is planning to liberalise land laws further, which will aid the corporates to grab land from the small and medium farmers.

The BJP government is preparing itself to provide vast stretches of land to the capitalist cronies and sponsors of Mr Modi. The corporate-led industrial agriculture in India will create conditions of industrial feudalism and corporate landlordism in the one hand and consumerist individualism on the other.

The corporatisation of agriculture destroys social fabric in agricultural and rural communities. The cooperative culture is converted into a competitive culture that ruins rural communities with the growth of individualist consumerism. The market forces do not believe in diversification. The market forces promote economies of standardisation which is dangerous for the diversity within Indian agriculture. Therefore, the market-led industrial agriculture dominated by corporations can never be an alternative for India and Indian farmers.

The Government of India needs to find ways to invest in agricultural cooperatives to empower farmers and generate employment in agriculture by diversifying it. India and Indian farmers need socially responsible, environmentally sustainable and economically rewarding agricultural policies and egalitarian land reforms to increase farmers’ income and expand the market-led agricultural economy, where agricultural producers can directly interact with their consumers. Such an agricultural market economy would be open, free and fair.

Bhabani Shankar Nayak is a political economist working as Reader in Business Management in the University for the Creative Arts (UCA), UK.