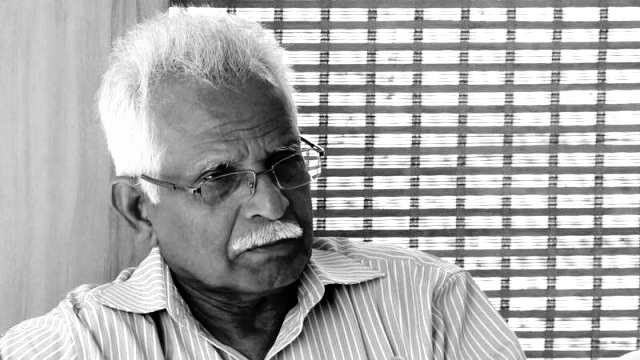 The General Secretary of the CPI(M-L) Red Star, K.N. Ramachandran suddenly went missing from the Howrah station, after he reached there on Sunday afternoon from Lucknow to participate in a series of political events to express solidarity with the on-going Bhangar land movement. He was abducted by men without uniform, who informed him that they are from Central Intelligence and detained him as per “instructions from New Delhi”.

In a press statement published by the CPI (M-L) Red Star, K.N. Ramachandran, who reached Delhi on 25th January morning at 11:30 am in Rajdhani Express, told:

“When I reached Kolkata station on 22nd January from Lucknow by Nangal Dam to Kolkata Express at 5.15 pm and was walking to the place where our comrades were waiting, 5-6 men overpowered me, closed my mouth , blind folded and took in a Tata Sumi for an hour to one building in the outskirts of the city I presume. They frisked me and took the mobile phone and were claiming they were from Central Intelligence and taking me to meet their seniors. At the office a Malayalee offiicer who introduced himself as Vinod interrogated me. He refused to allow me to inform my condition to the family and told that I am detained under instructions from Delhi and future course of action will be decided only tomorrow. On 23rd morning I was told I will be taken by noon. In the afternoon again I was blind folded and taken in a vehicle. After almost 3 hours it stopped and somebody claiming himself as the chief of Central Intelligence in WB told me that according to instructions from top he is acting and I have to go back to Delhi forthwith. When asked whether it is an order to extern me and what authority he has to impose it he had no answer. He arranged a ticket in Sealdah to New Delhi Rajdhani and his goons looking followers opened my eyes and put me in the Rajadhani at nearby Durgapur station and gave me my suitcase. His men had taken away Rs 3000 from the bag and did not give me the mobile ensuring that I cannot return to Kolkata for the scheduled 24th January visit to Banghar and press conference at Kolkata. As the ticket itself was faulty it was with the help of the train staff I could reach Delhi by 11.30 am.

The whole episode of kidnapping and detention of the general secretary of a party which is working openly at all India level is a naked repetition of what the central and state governments are doing at Banghar in South 24 Parganas. I am not sure whether these criminals who detained and caused such mental harassment to me are from Central Intelligence, WB state intelligence or the goondas of the ex MLA of TNC and the present MLA and minister in the TNC cabinet, or a combination of all these who staged it. It was a naked fascist act to suffocate my voice, to prevent me from going to the villages to declare solidarity with the affected people and families of the two martyrs, and to address the media at Kolkata explaining the details of the Banghar movement.” (sic)

The state government and its police apparatus expressed surprise at the turn of the events and despite their claims of being unaware of any detention of K.N. Ramachandran, which cannot happen unless any of the state agency is involved, the truth is getting exposed that the government of Mamata Banerjee, in connivance with the Modi government, is trying to muffle the dissenting democratic discourses in the state, especially in the wake of the Bhangar land movement that has shaken its base.

CPI(M-L) Red Star is neither a banned outfit nor is K.N. Ramachandran a wanted person for the police. His abduction was illegal, as the incident was neither reported to the state police (as per the narratives of Kolkata police) nor was he allowed to make calls after the abductors deported him.

The entire episode, as per the doubts of K.N. Ramachandran looks like a staged affair to bully the small parliamentary outfit that is trying to make inroads into the Bhangar movement.

In the last few days, the Trinamool Congress led state government, in an unholy nexus with the Anandabazar group as its media partner and Reliance Jio as its technology partner, carried out a smear campaign against the mass organisations that worked towards building a massive movement against land acquisition in Bhangar.

The government, the mainstream corporate media, and the Reliance Jio kept on portraying the mass organisations in the area as “Maoists” despite the fact that the CPI(M-L) Red Star participated in polls and have denounced the armed revolutionary calls of the CPI(Maoist). The generalisation of “Naxalism”, to justify the police repression on the participants in the Bhangar land movement, is now pursued as a strategy by the Mamata Banerjee led government.

A heinous plot is hatched to derail the massive mass movements that are brewing against the ruling clique and its musclemen, which has the potential threat to form a new political alliance that can topple Mamata Banerjee’s much-cherished government in 2021.

The dynamics of the land movement politics and its contradiction with Mamata Banerjee’s compulsion to ensure the implementation of pending industry projects will surely bring new changes in the political landscape of West Bengal and pave ways for new power equations to rise to power.