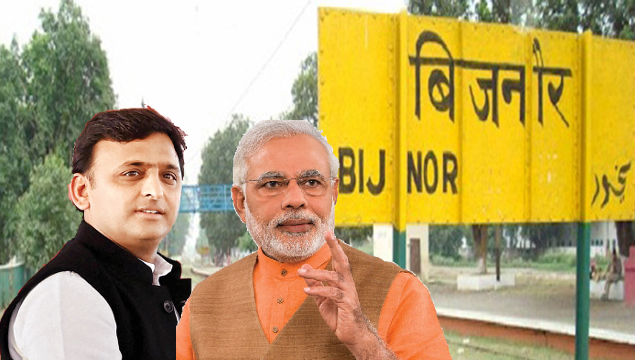 The RSS is seeing a clear danger in the voting pattern in the Uttar Pradesh elections and hence it’s pressing into service its most trusted bigots to incite communal tension in different regions of the largest state of India and to scare the majority Hindu community, especially the Dalits and backward castes and win them over to support the BJP. The Bijnor murder brought the very opportunity the saffron camp was looking for.

In Nayagaon village of Bijnor district, a Jat teenager named Vishal was killed and his father, Sanjay, was injured when they were attacked by a group of Muslims.

It’s alleged that Sanjay was one of the accused in the murder of four Muslim youth in the same locality in September 2016. The main accused in that triple murder case is RSS activist and lawyer Mausam Chaudhary, who is the husband of the BJP candidate from the constituency in Bijnor, Suchi Chaudhary.

Those who are accused of murdering Vishal and injuring his father are close supporters of the Samajwadi Party incumbent candidate Ruchi Vira. The incident has now taken a communal colour, thanks to the untiring efforts and conspiracies hatched by the Union Minister Sanjeev Balyan, an accused in the Muzaffarnagar pogrom, who reached Bijnor to create ruckus.

Following the lead from Balyan, the RSS and its online battalion took up the issue and portrayed it as ‘Jihad’ by Muslims and started bad mouthing the entire Muslim community at a time when people of a large part of Uttar Pradesh were casting their votes in the first phase of the seven-phase long assembly elections. Bijnor will go to polls on 15th February.

Throughout the internet and in the offline space as well, the BJP members and supporters started endorsing the statement made by their ‘fringe element’ supporters that the murder was a conspiracy of the Muslims against the Prime Minister’s rally few kilometres away from the spot of the crime in Bijnor. In the same rally, the candidate Suchi Chaudhary delivered a speech accusing the Uttar Pradesh government led by Akhilesh Yadav of deliberately framing her “innocent” husband.

The economy of sugar-cane in the Jat heartland kept the minority Muslims and dominant Jat community closely knitted due to their common interests. However, the entrance of the Hindutva brigade, which was initially funded by the local sugar mill owners to incite communal trouble to ensure that the farmers’ union is dismantled and turned into a pawn of the mill owners, wrecked the havoc of communal tension in the region.

By using the incidents of harassment against women, which is high in these regions of Uttar Pradesh, the BJP and other front organisations of the RSS, including the most notorious Bajrang Dal, started instigating communal tension and  powered by the rise of social media and mobile internet, the RSS outfits started propagating utmost deceitful campaigns to malign the Muslims and intensified the Islamophobia among the Jat community.

The organisational weakness and political opportunism of the Rashtriya Lok Dal led by Ajit Singh, which remained one of the major political representatives of the Jat community of Western Uttar Pradesh, helped the BJP to wean over the support base of the dying party to its Hindutva fold by the end of 2011.

Since 2012, the organisational presence of the RSS outfits like the Bajrang Dal and the BJP increased manifold in the area and by luring the politicians from other parties of the right-wing, like Sangeet Som and Hukum Singh, the BJP ensured that they had the manpower to carry out a largescale communal pogrom in the region. They successfully carried out the 2013 Muzaffarnagar pogrom to ethnically cleanse villages and establish the unquestionable hegemony of the Hindutva forces in the Jat heartland.

Due to the BJP’s failure to address the Jat reservation issue in Haryana, the community members of Uttar Pradesh were again leaning towards the RLD and the Samajwadi Party, which panicked the BJP lately. They were attempting to consolidate the entire Jat community vote under the Hindutva umbrella by giving lucrative baits to the community leaders and feudal landlords.

Amit Shah recently met Jat leaders at his residence and promised that the BJP will be working extensively to promote the interests of the big landowners and feudal patriarchs of the community if voted to power in Uttar Pradesh. The Jats were discouraged to forge any socio-economic relationship with their Muslim and Dalit neighbours and were incited with the ‘Holy Cow’ issue, a common point to create a rift between the majority Hindu and minority Muslim community throughout the country.

The murder of Vishal and the critical injury of his father at the hands of the local Samajwadi Party-affiliated goons in Nayagaon of Bijnor had caused grave harm to the poll fortune of the incumbent MLA Ruchi Vira, as the incident took away a large chunk of his Jat support base to the BJP and the following communal tension will help the BSP to wean the distressed Muslim vote-bank in the Bijnor district. Mayawati has already fielded a Muslim candidate in Dhampur. Mayawati also promised an end to communal violence and strict action against the criminals involved in these incidents along with their masterminds.

Local Muslims and Dalits, including the BSP candidate from Dhampur, Muhammad Ghazi, blamed the BJP and the other RSS affiliates of executing the heinous crimes just before the polls in Bijnor to polarise the voters. They are alleging that the local Samajwadi Party MLA and the government officials of having a role in promoting the growth of the BJP and the Hindutva brigade in the area. Indian Express quoted Ghazi alleged that those who killed Vishal and injured Sanjay were members of the BJP and they are doing it to blame the entire Muslim community.

On the internet and social media, the IT cell staff of the BJP in Uttar Pradesh and New Delhi are constantly fed their arch-reactionary Hindutva fans with concocted tales, a very trademark of the RSS propaganda machinery. This news of one murder and another injury became a rallying point for the BJP as they could portray it as an ideal ‘Jihad’ incident, which helped them to drive home their point – the Hindus in Uttar Pradesh won’t be safe unless they vote to power the BJP. As the RSS plays the role of a ‘cultural organisation’ it becomes easy for it to carry out these extreme communal polarisation exercises overriding the Supreme Court verdict right in front of the Election Commission.

As the BJP is devoid of any strong issue to draw the people towards itself, especially after the demonetisation drive harmed the economy and caused huge damages to the livelihood of the poor people. In all the states that are going to poll this year, BJP is relying entirely on the support of the RSS and its riot inciting capability to polarise the voters and replicate the experience of the 2014 polls.

The Samajwadi Party-Congress coalition failed drastically to counter the vilification campaign by the loose cannons of the RSS-BJP in the Uttar Pradesh, rather by sending compensation cheque to the family of the murder victim in Nayagaon, Uttar Pradesh Chief Minister Akhilesh Yadav gave the crime a communal colour, which became a blessing for the BJP.

How much the BJP will benefit from this communal propaganda and tensions in Uttar Pradesh and other states undergoing polls will be known to us on 11th March. However, as the RSS and the BJP are successfully manipulating information and carrying out deceitful propaganda, it seems that it will not be turned down by its target-group, the feudal landlords and urban elites from the Hindu upper-caste and dominant groups like Jats.

By carrying out the Muzaffarnagar pogrom in 2013 the RSS initiated the victory march of the saffron brigade in Western Uttar Pradesh, which resulted into BJP sweeping the state during the parliamentary polls with the highest number of criminal cum bigots getting elected to the parliament. The RSS will not slay the hen that lays golden eggs for it; while till the time, the hen is around, the situation will remain perilous for both democracy and the common people of Western Uttar Pradesh in particular and the whole state in general. Bijnor should not be allowed to become another Muzaffarnagar or Dadri.

Share your feedback on the story by commenting below or write to us peoplesreviewin@gmail.com