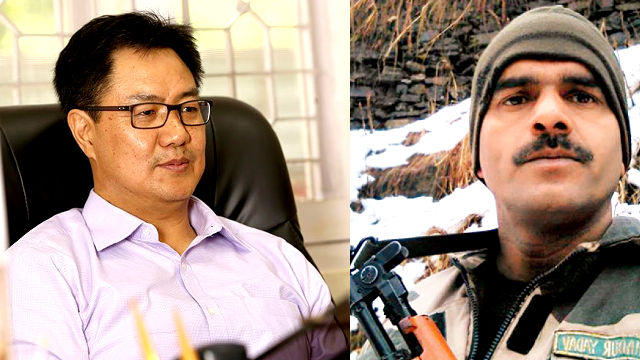 Kiren Rijiju posted a video of a soldier on Twitter where the man is bashing the “anti-nationals” and “Afzal worshippers” using the very language that RSS use. Kiren Rijiju used this video to counter Gurmehar Kaur, a 20 year old student from Lady Shri Ram College who started a campaign against the hooliganism of the fascist stormtrooper ABVP.

Kiren Rijiju earlier questioned the intellect of Gurmehar Kaur who lost her father during the Kargil conflict and the MoS Home, while ignoring the rape threats issued to Kaur by the RSS supporters, staunchly advocated gagging of free voice and strongly opposed Kaur’s anti-war standpoint.

Rather than acting against the rape threat perpetrators as the MoS Home, Rijiju was busy finding out who polluted the mind of the young girl and as predicted, he found that it was the “leftists”, though he didn’t mention which party or organisation of the fragmented left bloc was to be blamed.

When the people and the progressive thinkers of the country condemned his onslaught against the student, Kiren Rijiju posted the video of a soldier from his official Twitter handle to criticise the critical voices that question the Modi government and the Hindutva agenda of the RSS of which gagging of opposition voices is an integral part.

While Kiren Rijiju posted a video of a soldier who was unidentified and was repeating the allegations that the Hindutva brigade levelled against the left and democratic forces critical of the Brahminical Indian state’s policies, especially related to Kashmir, Manipur, Mizoram, Nagaland, etc. the MoS Home forgot that two months earlier another video of a paramilitary BSF (comes under the Home Ministry) soldier, Tej Bahadur, surfaced, in which the soldier showed that poor quality food is provided to them at their camps.

Tej Bahadur’s video went viral and its viewer count is far more till date than the video posted by Rijiju. The RSS’ military-worshipping “nationalism” vendors didn’t like the fact that soldiers are complaining about poor quality of food. They took punitive actions against Tej Bahadur and being the MoS Home, which controls the BSF and other paramilitary forces, Kiren Rijiju cannot absolve himself from those decisions.

While Kiren Rijiju posted a video of a soldier who is reiterating RSS’ slogans on “nationalism”, he remained mum about the new allegations levelled at the government by Tej Bahadur. The BSF soldier alleged that his Facebook account was tampered with and a lot of Pakistanis were added to his friend list in a new video. Tej Bahadur questioned why the Modi government and the BSF officers took no steps to resolve the issues he pointed out in his first video?

Kiren Rijiju must tell the countrymen he thinks he is serving that why the CRPF soldiers deployed in Bastar to carry out a war against the Tribal people on behalf of the mining corporations were gagged when they too went on social media to showcase their plight in the camps?

Before showing his sham love for soldiers, Kiren Rijiju should answer why the Modi government has censored the use of social media platforms for the soldiers. Why did the army chief ask the army men to directly write to him all their grievances than appearing on social media platforms after a soldier followed the footsteps of Tej Bahadur?

Being the MoS Home, Kiren Rijiju should also answer the public, at least through his social media handles, why the liquor of the BSF soldiers was sold to outsiders and who all are involved in this scam?

When Kiren Rijiju posted a video of a soldier to prove his point against Gurmehar Kaur and everyone else protesting against the fascist ABVP and other RSS outfits, he forgot to answer the questions raised by BSF soldier Tej Bahadur on the vendetta regime of the Modi government unleashed upon him.

Kiren Rijiju didn’t inform the public why the Home Ministry officials and the BSF authorities are trying to blame Tej Bahadur of falling prey to Pakistani honey trap and being in touch with Pakistani intelligence to defame the man who dared to question the treatment meted out to the soldiers.

Moreover, Kiren Rijiju is silent on where and how he got the clip of the soldier who is beating the propaganda drum of the RSS by using the exact words and phrases the Shakha Pracharaks use to incite mob violence against progressive and democratic forces.

Kiren Rijiju didn’t tell us yet why he is sharing the video of a soldier on social media when according to the latest directions of the Army chief, sharing videos on social media is something soldiers should desist from. Is it that the MoS Home is giving special immunity to those soldiers who are ardent disciples of the Golwalkarite-Savarkarite ideology?

Though the corporate media is highlighting that Kiren Rijiju posted a video of a soldier on social media to garner support against the left-wing forces, against whom he was raised with extreme hatred by the Hindutva brigade to whom he remained loyal since his Delhi University days, Rijiju is actually trying to smoke screen the videos of dissenting soldiers from public view. He is playing the over-used soldier card of the RSS to build up mass opinion in favour of imposing Brahminical fascism and gagging all dissenting voices throughout the country.