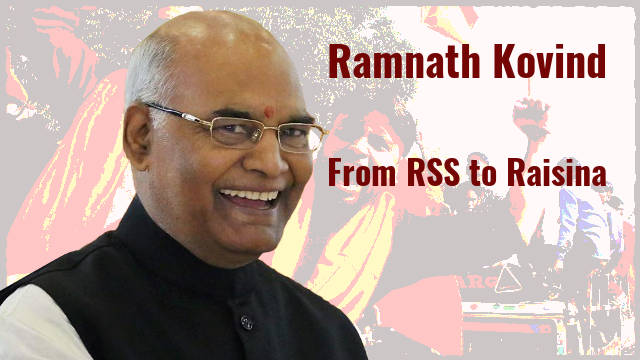 Ramnath Kovind is the BJP’s trump card in the forthcoming Presidential election because of his Dalit identity, which will put the opposition in shambles as they would not be able to counter this move with any other Dalit candidate of the stature of Kovind. Their attempt to put up a savarna candidate against Kovind will again cause grievous injury to the opposition’s Dalit vote bank.

As the situation is indicating, Ramnath Kovind will sail to Raisina Hills without a tough competition and it will be one of the spectacular victories of the RSS-led Hindutva fascist camp in India, after the formation of the Modi government in New Delhi and Yogi Adityanath-led BJP government in Uttar Pradesh. An RSS man at the helm of the country will be a boon for the Modi government’s attempt to formally establish a Hindutva fascist dictatorship by 2023-24.

The opposition cannot put up a Dalit candidate of the stature of the RSS propagandist and hence, in order to prevent further erosion of their Dalit vote-bank most of the opposition parties, including the BSP, will vote for Kovind due to the lack of a Dalit candidate in their camp. The utmost confusion and the disarrayed opposition will add scores to the BJP’s chart and the Narendra Modi-led regiment will use the pro-Dalit image to sweep 2019 election as well.

The Dalit identity of Ramnath Kovind will help the RSS and its political mass-organisation, the ruling BJP, to encash Dalit votes that will swing to its favour after initial disgruntlement in Gujarat, which will go to poll later this year and in Madhya Pradesh and Karnataka, where the BJP will fight a strong battle next year.

This candidature of an UP-based politician, who followed the RSS-style of living forever, would also boost the BJP’s prospect in soothing the Dalits of Western UP’s Saharanpur, who fought a valiant battle against the casteist violence unleashed by upper-caste Thakurs, who form the core support base of the RSS and the BJP in the state.

Since K.R. Narayanan, India never had any Dalit at the top position and the choice of the Congress was the upper-caste Pratibha Patil and Pranab Mukherjee, sent to Raisina Hills in return of their years of loyalty towards the Gandhi dynasty. Through Ramnath Kovind, an ardent propagandist of the RSS and an unapologetic bigot, the BJP will make a big kill in building its image among the Dalits and wean the left-over Dalit vote bank of the Bahujan movement to its Hindutva camp

Ramnath Kovind is a Dalit lieutenant of the Hindutva camp who strongly believes in Brahminical hegemony and the venomous doctrine of Hindutva. The presidential candidate, during his tenure as an active BJP leader, took the most controversial position on the issue of Muslims and Christians, whom he considered outsiders to India following the teachings he received at RSS Shakhas, he strongly advocated North Indian upper-caste Hindu tradition to be followed throughout the country and oppose cow slaughter like any other saffron clad bigots of India’s largest fascist outfit.

Placing such a man as the titular head of the state will signify the BJP’s expectation from the Dalits – aspire to be an obedient servant of the Hindutva ideology and get rewarded by the Brahminical empire. Probably the killers of Rohith Vemula, the organisers of the gory violence against Dalits in Una, Gujarat and Saharanpur of Western UP will showcase the rise of Kovind as a lollipop for the Dalits to relish and forget the atrocities being committed against their community by the feral Hindutva mob.

Ramnath Kovind and his type of Dalit leaders and propagandists of the RSS do not believe in caste equality and don’t favour the abolishment of the caste system, rather they justify the caste system by stooping before the mighty Brahminical system and by painting a humanist coat over the grotesque face of the Hindutva fascism. It doesn’t bother the likes of Ramnath Kovind that the Dalit community is lured by the Hindutva camp to its fold only to be used as pawns against the Muslim community during communal riots. It’s the only thing that the Dalits are worth for and they are wooed by the Hindutva bigots only because they are expendable for the greater mission of suppressing the Muslim community using mob violence.

The next move of the RSS will be to place a tribal propagandist in the Vice President’s office, once the term of Hamid Ansari is over. The take-over of the second highest titular position of India by a tribal would help the BJP to build up a favourable image before the tribal masses of Odisha, which will go to poll next year, and states like Jharkhand and Chhattisgarh, where the BJP is leading the war against the tribal people on behalf of the big mining corporations that are drooling for the minerals stored beneath the soil of the forests.

If a tribal becomes the deputy of a Dalit President, there will be boost in the fortune of RSS’ penetration drive in the tribal heartlands of West Bengal, Assam, Meghalaya, Mizoram, Manipur, Telangana and Gujarat, where it’s building up a huge militia of indoctrinated and radicalised tribal people to fight its war against Christian missionaries and organisations that work to unite the tribal people against the repression laden by the government and the big corporations. Tribal vote bank comes at a cheaper price than the Dalits, thanks to the non-existence of education among the broad tribal masses, lack of government welfare measures and due to the apathy of the government towards them.

Tribal and Dalit penetration and Hindufication of such people remains a top priority of the RSS to change the demographic equation of the country. It’s the same reason why Ramnath Kovind opposed any reservation for the Christian and Muslim Dalits and Tribal people, calling them followers of non-Indian religions. Despite knowing the fact that the largest section of the Muslim and the Christian communities remain quagmire in deep socio-economic crisis, the BJP’s determination, expressed by Kovind as a parliamentarian, showed the Hindutva camp’s extreme hatred towards these communities.

After becoming a President, Kovind will need to take an oath of becoming the supreme guardian of the Indian constitution that gives equal rights to all people, irrespective of their communal identity, and advocates secularism and the right of the people to follow or not follow any religion of their choice. Deep in his heart, Ramnath Kovind will not feel contended to utter his absolute loyalty to the constitution because of his belief in the RSS’ anti-secular dogma, but as a true RSS conman, he will say he will do what he never intends to do.

A Dalit president like Ramnath Kovind will not change anything in the lives of the Dalit people but will act as the example of Dalit empowerment through the same Brahminical hegemonic system that has violently suppressed the Dalit community since ages and kept them out of the ambit of education, healthcare, and basic human rights.

Under Ramnath Kovind’s presidential tenure the Modi government will certainly play more gimmicks and win more elections with full vigour and proceed towards its goal of establishing a Brahminical theocratic dictatorship over the country by 2023-24, when the party will have enough majority in both houses of the parliament and will be able to change the constitution unchallenged by any opposition. Towards that day Ramnath Kovind will keep doing his duty to uphold the RSS flag and help the Indian ruling classes to divide and rule the people.