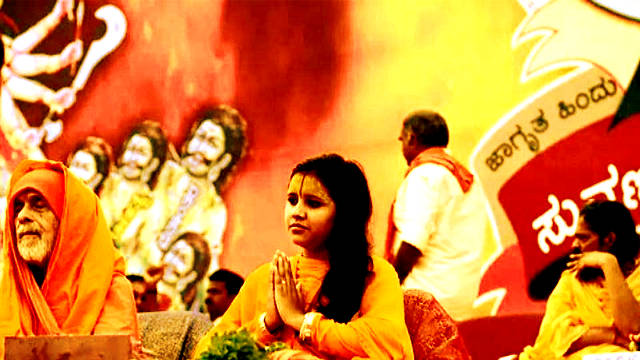 The social fabric of the country, especially the communal harmony that existed in other parts of India than communally turbulent cow-belt, has been ripped off by the Hindutva regime in the last three years. The “holy cow” issue is used every now and then to threaten the Muslims, Dalits, Tribals and Christian population of the country by the stalwarts of Hindutva fascism. The ranting against the beef eaters by a certain Hindutva fanatic, Sadhvi Saraswati is another addition to the hatred-filled campaign by the fascist forces of the country.

Sadhvi Saraswati’s father is a Vishwa Hindu Parishad leader and being a hardcore misogynist, he took off his daughter from school and forced her into the fanatic club, of which she is now an inalienable part. The mediocrity that the Hindutva fascism demands from its followers, can certainly come from people who have been tormented and forcefully pushed into the fray of religious bigotry by their parents and family, Sadhvi Saraswati being a classic example of it.

Though it’s not a crime to not have formal schooling in a poor country like India, it’s certainly a crime when a father forces a third grader, 12-year-old, to quit her education and venture into the fascist league through extreme indoctrination and radicalisation of the young mind, which is a crime against children. A radicalised mind like that of Sadhvi Saraswati’s or other such sadhvis and yogis, who were radicalised since childhood by their Hindutva fanatic parents or leaders, cannot think rationally and can never reconcile with the democratic ideas and values, as bigotry runs contrary to the idea of free thinking and civil-liberty, the foundations of democracy. This disconnection with the democratic values and ideologies, due to improper raising by fascist parents, is what makes Sadhvi Saraswati, who leads the Sanatan Dharma Prachar Seva Samiti, hate people and spread vitriol with the intention of seizing political power in the future.

This is why, while addressing a congregation of Hindutva fanatics and terror organisations called – Akhil Bharatiya Hindu Adhiveshan, which was not attended by any sensible Hindus of India, Sadhvi Saraswati demanded that people who eat beef must be hanged in public, a demand which has the essence of fundamentalist thought processes like that of the Wahhabi Saudi Arabian government or the Taliban in Afghanistan.

Mob lynchings and mob justice are favourite weapons used by the fascists all over the world while implementing their hate-crime agenda. The Indian fascists, led by the Brahminical supremacist RSS, also justifies mob violence through all mediums of communication over which it has absolute monopoly, like – cinema, literature, government communiqué, social-media rants, TV news channel debates, etc. and this justification is considered valid by a lot of upper-caste Hindus, who support the RSS only for its anti-Muslim and anti-minority standpoint.

Sadhvi Saraswati’s demand for lynching, or rather, the state-sponsored lynching of individuals for exercising their individual rights reserved by the Constitution of the country, makes it a point that among the RSS-affiliated fascist thugs there is absolutely no respect for the law of the land or the constitutional rights guaranteed to the Indians. These forces are determined to establish a theocratic dictatorship under the supremacy of the Brahmins and Kshatriyas and enslave the lower castes of the Hindu caste-hierarchy, the Dalits, tribal people and the minority communities.

Many columnists, politicians and intellectuals will strongly condemn the rantings of the Hindutva terror-mongers like Sadhvi Saraswati and until now, several newspapers, portals and magazines have published articles criticising the viewpoints of the Sadhvi. But none of them actually took the pain, and we know why they didn’t take it, to uncover the mysterious process that manufactures people like Sadhvi Saraswati out of ordinary women. The hate-monger Sadhvi is not the sole problem that the so-called Republic face today, as it’s the system, which is based on a semi-colonial and semi-feudal base, that breeds thousands of Sadhvi Saraswati & Co. due to the dominance of the feudal production relationship in the vast countryside of India and due to the supremacy of the Brahminical feudal outlook in the country that hinders the growth of any progressive, democratic and egalitarian ideology that could nurture and sustain a democratic fervour.

There cannot be any unique formula that can purge the Sadhvi Saraswati-type hate mongers from Indian political life, but the demolition of the feudal base which fosters the growth of religious bigotry and also the neo-colonial rule over the country by foreign monopoly and finance capital-owned corporations that buttress the feudal base to protect its own interests of plunder and loot of Indian resources, wealth and manpower. The politicians who come from feudal backgrounds, or are raised with feudal ideologies, cannot muster up any courage to battle the menace of the Hindutva fascism, which is a strong manifestation of the unity forged between the feudal Hindutva forces and the corporate lobby sponsored by foreign capital. There is a strong need for a new generation of anti-feudal and anti-colonial leadership in the country that can take into consideration the pulse of the youth, who account for more than 50% of the Indian population and are growing, and develop a comprehensive anti-fascist and anti-communal political movement that can strongly resist the growth of Hindutva fascism.

It’s only with the vigour and vitality of the youth that can arouse an intense anti-fascist and anti-communal fervour within the working class and the peasantry, and unite them under the banner of democracy and patriotism to defeat the Hindutva fascists and their boot-licking lackeys at every nook and corner of India. This country belongs to the 90% of its population, i.e. the working class and the peasantry; thus, it’s imperative to show the fascist hate-mongers like Sadhvi Saraswati and her coterie the doors to Pakistan, where they can certainly mingle with numerous fanatics like themselves. These fascists can be thrown out of India and its political framework only through the extensive anti-fascist revolutionary democratic struggle to establish the right of the poor, the downtrodden and the oppressed people and communities and this will certainly take India to a new realm of freedom, progress and development.