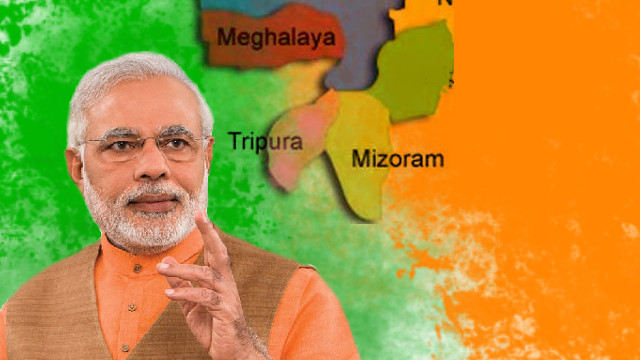 After managing to secure its iron-strong domination on the neo-Hindutva citadel of Gujarat and after bagging Himachal Pradesh in the recent assembly elections, the BJP and the Sangh Parivar is all set to expand its presence in the North East and sweep two of the states going for polls, Meghalaya and Tripura with sheer zeal and brute force. The fight is though not a cakewalk, but it isn’t less than a cakewalk as well. The upcoming assembly elections in Meghalaya, Mizoram and Tripura will be a crucial election for the BJP’s North East mission.

For decades, the BJP and the Sangh Parivar remained confined within the heartland of the cow-belt, the Northern and Western parts of the Indian Union where the majority of India’s ruling class resides. The BJP remained a true representative of the upper-caste, puritan, bigot elite vegetarian Hindus who mostly speak Hindi along with Gujarati and Marathi, with its agenda of establishing a Brahminical, puritan and theocratic dictatorial militarist state well received by these elite and upper-middle-class Hindutva fanatics, feudal landlords and comprador capitalists.

But since the days of Atal Bihari Vajpayee’s rule, the BJP has been instrumental in expanding its organisational presence throughout the country, even venturing into hitherto uncharted terrains. The North Eastern parts of India and the Southern Dravidian heartland became two of the prominent areas where the RSS started penetrating since the beginning of the new millennium with the agenda of militant Hindutva and started Hindufication of the tribal people and even won a large section of the Dalits to its fold by magnifying a purported Islamist and Christian missionary threat to tribal people.

Winning Assam, Arunachal Pradesh, Manipur and Nagaland assembly elections using a huge amount of money in the horse trading for MLAs and MPs, the BJP has now made itself a chief contender in the seven sisterly states of North East India where traditionally the parliamentary battle used to take place between the Congress and the regional outfits.

The BJP used extreme communal polarisation to win power in Assam, where it transformed the long-standing antagonism between the Ahom tribes and the Bengali immigrants into an antagonism between the majority Hindus and minority Muslims. The deep penetration into Assam by the Hindutva extremist groups led by the RSS, helped the BJP in strengthening its organisation and to split the Ahomiya society. Today, Assam is the base of BJP’s Hindutva campaign in the entire North Eastern belt.

In Manipur, Nagaland and Arunachal Pradesh, the BJP didn’t use communal tone to win elections, rather the money power of the RSS and the BJP did the magic. Armed with billions of rupees received from the foreign and domestic corporate houses and big feudal landlords every month, the RSS is one of the well-funded organisations in India. The money, or a meagre amount out of it, helped the BJP to buy legislators and turncoat politicians in these three states to join its rank and help it form the governments in these states.

The scenario is bit different this time as the people of numerous tribes and the overwhelming majority of poor people residing in the North Eastern states have already seen the disastrous policies of the RSS and the BJP, which has turned India into a killing field for the minority communities like the Christians and Muslims.

As the states like Meghalaya, Mizoram and Tripura doesn’t have a sizeable Muslim population and the BJP can’t invoke communal feelings in the Christian-majority states like Meghalaya and Mizoram using its patent Hindutva formula, therefore, it’s now reversing the communal overtones by choosing majoritarianism instead.

As Christians are in majority in the states like Meghalaya and Mizoram, the last one with 87 per cent Christians, the BJP has dropped the trump card of beef and Muslim bashing and is trying to incite xenophobia instead, against the Chakma and Chittagong Muslim immigrants living in these states, to unite the majority community under its banner. The BJP is trying to prove that it loves Christians and hence people of Goa and Nagaland elected the party to power.

The Mizoram party chief, Hluna had earlier rejected the news that the BJP will ban beef upon coming to power in Mizoram, while the Meghalaya BJP chief, KS Lyngdoh, a close aide of the RSS’ North East head, is very cautious in his remarks and thrusts the rapier into the Congress’ soft-Hindutva credentials whenever he encounters questions regarding the BJP’s hardcore Hindutva character.

Lyngdoh keeps batting for the BJP’s secular credentials, refuting allegations against the party and negating evidence of its vitriol and violence against the Christian minorities in states like Jharkhand, Madhya Pradesh, Odisha and Uttar Pradesh.

In Left Front-ruled Tripura, the BJP will first time contest a direct election against the parliamentary left in a state where the parliamentary and opportunist left has ruled for more than two decades and has overseen the decimation of the major opposition parties like the Congress, the Trinamool Congress and the die down of the militant Indigenous Tribal People’s Front. The BJP became the principal opposition in the state assembly by buying the seven MLAs who won on Congress ticket.

As Tripura has a very microscopic presence of the Muslim community, that too mostly in the capital city of Agartala and neighbouring Dharmanagar, where the party is already employing local ruffians to throw pieces of beef inside temples to incite communal riots on a large scale, the party’s main focus of work has been to spread the idea of Hindu identity among the tribal people of the state, to unite the Reangs, the Chakmas, the tribal people of hilly areas and the Debburmans under its umbrella.

For the urban, Bengali-majority areas of Tripura, the Hindutva camp has its usual plan of using vitriol and xenophobia against Muslim infiltrators from Bangladesh and the threat of Christian militants like the NLFT forcing religious conversions. The gubernatorial position of the state is filled with a serial hate-monger and communal venom spitter RSS stalwart, Tathagata Roy, who takes huge perks from public exchequer for warming the Constitutional seat created on the colonial model and he use his extremely free time to spread vitriol and communal hatred on social media. His Tweets are full of communal gems, from threatening to exterminate the Muslim community in India to the glorification of the pogrom of Gujarat.

Tathagata Roy is playing a very important role in strengthening the cause of the Hindutva camp in Tripura and to also export Hindutva terrorists to neighbouring Bangladesh, where the Vishwa Hindu Parishad and the Bajrang Dal are regularly milking the religious sentiments of the persecuted Hindus and Chakmas to build up fundamentalist terrorist forces in the line of jihadists of Afghanistan and Pakistan.

Tripura’s poll campaign is centred around the purported threat of Bangladeshi infiltration, which is hyped by the BJP to show that the government of the Left Front is hand-in-glove with the jihadist forces to change the demography of the state. The fear factor, along with the revival of the ITPF, a militant organisation, is helping the BJP to intensify its campaign for power in the state. The CPI(M)-led Left Front is unable to tackle the rise of the RSS-led Hindutva camp both politically and organisationally as opportunism has hollowed the core of the party and it’s now another social-fascist ruling party, which is despised by the working class, the peasantry and the tribal people for its atrocities and its pro-ruling class standpoint.

Narendra Modi’s goal of establishing a vegetarian and Brahminical authoritarian rule, the Hindutva camp’s incessant attack on Christians throughout the cow belt, the anti-Christian pogrom organised in Odisha by the Vishwa Hindu Parishad and the RSS in 2008 to the recent attacks on Christian pastors singing carol in Satna of Madhya Pradesh or the issuance of threat to the Christian schools in Aligarh, Uttar Pradesh by the goons of Hindu Jagran Manch, the serial attacks on Churches and other prayer areas by the Hindutva goons in North, West and East India have been veiled in the poll campaigns of Meghalaya and Mizoram by the poll strategists hired by the BJP.

Except for Tripura, the BJP is converting its allegiance to the doctrine of Savarkar’s Hindutva, which calls the Christians and Muslims the others and is an exclusive political ideology, into a majoritarian fascist ideology by wearing a pro-Christian cloak in Meghalaya and Mizoram. The BJP’s cunning moves, which includes its politics of spreading xenophobia, using jingoism, altering and subverting the cultures and traditions of tribes and its unchallenged position to spend huge amount of money to buy leaders and workers of its chief opponents as well as to hire Hindutva foot soldiers for executing divisive and communal agendas in the poorest parts of these states have rendered the Congress and the Left Front helpless and toothless in the region.

Even after the Congress and the Left Front fighting a hard battle against the BJP in the polls of Meghalaya, Mizoram and Tripura in 2018, there are great chances for the BJP to use the blend of state power, its control over bureaucracy, the loyalty of the Indian Army and paramilitary forces towards the RSS, the strong bonhomie between the RaW and the RSS headquarters and its coffer full of money to sweep victory or at least increase its presence in the assemblies of these states by many fold.

The BJP and the RSS can be defeated, organisationally and politically, in the North East, if the working class and the peasantry are united under the banner of a revolutionary struggle for democracy and social justice. If a movement with the potential to thread the aspirations and demands of different ethnic communities, tribes and nationalities can be initiated, by uniting different nationalist and ethnic organisations that follow a progressive vision in these seven sister states, then a real movement for a real and inclusive change can be initiated.

In Meghalaya, Mizoram and Tripura, the struggle of the indigenous people against the efforts by the Indian ruling classes to homogenise and integrate them into the caste-divided Hindu society must be intensified and the nationalist movement to stall the campaign of Hindi-Hindu-Hindutva must be initiated immediately to thwart the catastrophe that waits to happen in 2018 through the route of assembly election, the route through which only miserable life and extreme poverty comes to the lives of the people. The struggle isn’t only about the three states, but for the whole North East and millions of people of different tribes, ethnicity and sects who live in the region.