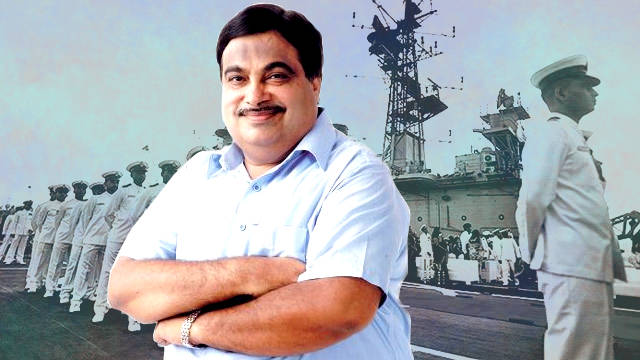 The essential pre-conditions of nationalism and patriotism, according to the Sangh Parivar and the Modi regime, are absolute and unconditional submission to the might of the Indian military establishment, which consists of the Army, Navy and Airforce. Seldom does the crook pastor follows the gospel teachings in his own life. This became evident once again when Nitin Gadkari, the former BJP president who holds the crucial portfolios like Shipping, Water Transport and Road Transport ministries in the Modi regime, lambasted the Indian Navy from a public forum, declaring boldly that he will not allow the Navy an inch of land in the posh South Mumbai locality of Malabar Hill and asked it to go to the maritime border with Pakistan rather than stalling the projects of the Modi-Fadnavis regimes.

Nitin Gadkari was speaking at an event in Mumbai where the Vice Admiral Girish Luthra, the Commander-in-Chief of the Western Naval Command (WNC) was present. In the presence of Luthra and other Indian Navy officers, Nitin Gadkari asked why the Naval forces want to live in Mumbai and why they can’t go to Pakistan border where they should patrol? His utmost sarcastic and extremely humiliating remarks may have irked many Naval officers and crew members, however, the RSS, the BJP and other Hindutva forces, including the sycophants of Narendra Modi saw no wrong in the threats issued by Nitin Gadkari to the Navy.

Those TV news anchors, who work as demagogues on the payroll of the Modi regime and carries out smear campaign against any political force or individual who raise their voice or fist against the Hindutva fascist forces or criticise the atrocities of the armed forces, remained extremely mum when one of their own men was asking the Navy to go out of Mumbai. No outrage was seen pouring in over the comments of Nitin Gadkari on social media, not even from those who would flaunt their love for the armed forces at every instance. The retired generals and BJP’s officers who would frequent TV channels every evening and shed their crocodile tears over the fact that people show audacity to question the army, which according to them serves the nation rather than working for money, remained conspicuously silent and absent from the scene. Just imagine the scenario should a CPI or a BSP leader uttered those words at the Navy men.

It’s not the first time that the BJP or the RSS leaders are found talking or working against the military establishment, which it worships and swears allegiance to, in public. The sheer hypocrisy of the Sangh Parivar on the question of respecting the armed forces can be seen when it humiliates the former soldiers demanding One Rank One Pension (OROP), when the Modi government throws out of job the paramilitary soldier Tej Bahadur Yadav for raising questions over the substandard food provided at the camps, the military men and women are humiliated at every step of their career by the Modi government, which like any other fascist regime demands absolute loyalty from all forces to quell the chances of a coup against it.

Nitin Gadkari is so sacrosanct and immune to media scrutiny, like any other minister or leader belonging to the BJP, that even when they publicly spit at the military establishment, the corporate media pimps who would otherwise yell, pulling out their lungs, to condemn and bully those who genuinely questions the hype built around the military in a democratic society, suddenly gets busy to sweep such remarks below the carpet and divert the attention of the people towards “Congress’ corruption” and organise televised debates around it. Nitin Gadkari remains aloof from the cacophony of these Gadflies. Just like the corruption allegations against him have vanished since 2014.

One needs to remember that after Bangaru Laxman, Nitin Gadkari was the second BJP head who was compelled by public wrath to quit the BJP president’s post after his Purti Sinchan Kalyankari Sanstha was found quagmire in several corruption cases. Even the RSS had to force him to quit so that the BJP could save its face and anti-corruption crusader image before the 2014 general election. Restoring Nitin Gadkari’s fortune by inducting him as a cabinet minister, Narendra Modi showed how hollow his own tirade against graft was indeed.

Like the late Pramod Mahajan, using corrupt practices and connection with corporate houses, Nitin Gadkari has now secured a stable channel of funding for the RSS and the BJP in Maharashtra and other parts of the country. He is one of the most powerful men in the Modi cabinet and his power and status were shown during his daughter’s lavish wedding in the midst of the demonetisation exercise when the whole nation was reeling under immense cash crunch and the Modi regime was befooling the people by shifting the goalpost of the exercise every day. The lavish wedding organised by spending crores was kept out of the purview of the Income Tax department to ensure the Modi government faces no embarrassment from it.

What made Nitin Gadkari lose his cool against the Navy and demand the Naval force to go to Pakistan border, like a regular troll on social media would ask anyone questioning the Modi regime? The answer lies in the economy of South Mumbai, where prime property rates are soaring high and the Naval forces occupy a large tract of land in the vicinity, forming several officers’ and staffs’ quarters. The Western Naval Command headquarters is also located near the Malabar Hill area and from there the Western seafront on the Arabian Sea, bordering Pakistan, is guarded by the Navy. The building of docks for cruise and seaplane landing, flotel development and other real estate projects that will benefit the richest of the rich, will bring in a lot of commission to the coffers of the BJP, the RSS and its regional allies like Shiv Sena, MNS and the NCP.

As the objections raised by the WNC had earlier stalled the aforesaid projects, mostly planned by Rashmi Infrastructure Ltd; the BJP and its allies, the local mafia, the real estate giants and builders sensed an imminent threat to their financial fortunes following the stalling of construction and the lodging of cases against the BMC, the Maharashtra government and the Modi regime for their involvement in the land scam in South Mumbai. The Modi regime also had to face the wrath of the environmentalists, who protested vehemently against the utter destruction of the environment, especially the ecology of South Mumbai by the land-hungry real estate sharks.

The likes of Nitin Gadkari would support snatching away of the rights of the people, miffle them when they dissent, gag press and opposition politicians to secure what is called – “national security”- while allowing foreign military, especially the US Army to station in India and use it as a logistical base under anti-India LEMOA contract, allow privatisation and FDI in telecommunications, which jeopardise national security more than anything and above all, shamelessly advocate that the Navy should refrain from raising red flags against the real estate projects in the vicinity of its command centre, knowing well that all construction activities, especially in strategically crucial areas, can be used to monitor and spy upon the military installations and these can be used against the people at the end. A notorious terrorist attack like the one on 26 November 2008, which didn’t kill politicians but common people of Mumbai, can be planned using the data unscrupulous individuals can collect by spying on security installations by using under construction projects.

The greed and lust of the corporate bodies caused immense damage to the ecology and environment of India as well as, it jeopardised the national security and sovereignty of India since decades. Now the Modi regime is executing the most unapologetic and heinous form of corporate appeasement, especially by prostrating before foreign capital and its Indian comprador allies. The case of handing over the prime real estate pieces in South Mumbai to the corporate world in order to build infrastructure and facilities for the super-rich shows the priority of the likes of Nitin Gadkari in particular and the “nationalist” Modi regime in general. No floatel, jetty for seaplanes and cruise will be helping the poorest of the poor of Mumbai who find it hard to earn a square meal a day. No development of real estate in South Mumbai by Gadkari’s men will help the poor farmers of Maharashtra, especially from the Maratha community whom the BJP and the Shiv Sena calls their own, to repay their debts and free them from economic exploitation by Sahukars.

The impunity with which this political dispensation led by Narendra Modi is operating shows that the communal polarisation done by the Hindutva camp and the regime’s dependence on tyrannical practices is making people like Nitin Gadkari sure that they will manage to win and rule over the country, come what may. This surety, which comes from their unchallenged political hegemony over the country, which is unmatched since the days of Indira Gandhi’s National Emergency, gives an impetus to Nitin Gadkari and other RSS men to act audaciously, not only against the opposition but also against the military establishment, which they place in the sanctum sanctorum to quash any criticism against the establishment and to keep the people ideologically and politically enslaved to the armed forces, who are paid from the hard-earned money of the working class, the peasants and the toiled people.

Any military establishment in a democracy is a servant of the people and the elected representatives of the people must keep them under their command, rather than getting commanded by them. However, for people like Nitin Gadkari and other RSS-trained Hindutva bigots, it becomes the other way round; they command the military and whips it when it questions the corrupt nexus between their regime and the contractors and builders, while they uphold the same military as sacrosanct whenever the people oppose the atrocities committed by the armed forces against the masses under the patronage of the state. Historically, fascism is always complicit in crimes against humanity and as a political ideology, it’s utmost corrupt and hypocrite in nature. Nitin Gadkari or the BJP are treading the same course that Mussolini, Hitler or Tojo traversed before them. It’s inevitable that the fall of the Hindutva camp led by Narendra Modi will be similar in magnitude like that of their fascist paragons. The countdown has started and the clock is ticking fast.