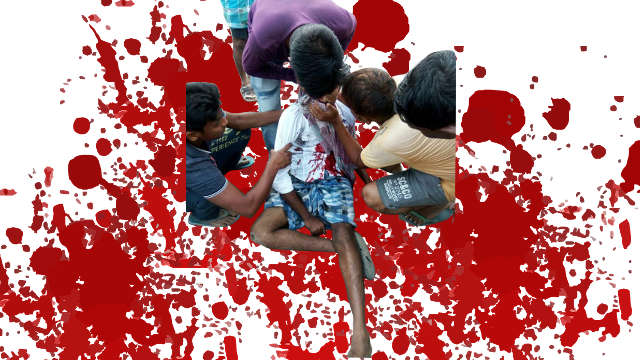 State and state-sponsored right-wing fascist violence continues unabated in West Bengal, especially in the battleground of Bhangar, where the villagers of several villages of the block are resisting the efforts of the Mamata Banerjee-led Trinamool Congress (TMC) government to seize their land forcefully and hand it over to a PSU for setting up a power plant that will supply electricity to the big corporate houses in neighbouring Rajarhat. Hafizul Molla (26) is the recent victim of the violence and terror unleashed by the ruling TMC and its local goon Arabul Islam on the villagers of Bhangar block. So far the violent attacks by the bloodthirsty hounds of Arabul Islam and the police have killed three people. Alam Molla and Mofizul Khan were killed in January 2017, when the police and Arabul jointly launched a large-scale attack against the villagers and their movement against the forcible land acquisition by the TMC.

On 11 May, when Hafizul Molla of Machibhanga village was participating in a rally  along with other members and supporters of the Committee for Protection of Land, Livelihood, Ecology and Environment, against the violence unleashed by the TMC during the recent Panchayat Election nomination filing, Arabul Islam and his brother Khude attacked the participants and shot Hafizul from point-blank range and killed him. The bullet hit Hafizul on the head and he died on the spot. When the villagers took him to a nearby private hospital, the terrorised hospital authority, eager to avoid future troubles related to the ruling party, denied admission on the ground that Hafizul Molla was brought dead and didn’t even do any postmortem.

The TMC goons led by Arabul Islam and Khude didn’t only kill Hafizul during the 11 May attack, they hurled numerous country-made bombs, fired multiple rounds from Chinese 9mm pistols and country-made one-shotters aiming at the participants of the rally. The police, which plays a crucial role in slapping the draconian UAPA on the anti-land acquisition activists ( the recent victim being Ratul, a doctor who is charged with UAPA for standing with the villagers of Bhangar against the government’s fascist attack), they remain, mute spectators, whenever the goons of TMC are in action. No arrests were made and only under severe pressure, especially after the people of Bhangar exploded in anger against the TMC and its leader Arabul Islam that Mamata Banerjee got him arrested to save him from the wrath of the people and placed him in Sonarpur Police Station to keep him away from the outrage of the people.

The growing anger against Arabul Islam and the ruling TMC is spreading like a wildfire in the entire Bhangar block. Panicked Khude and the mercenaries of Arabul are hiding from the wrath of the angry villagers of Machibhanga, Khamar Ait, Nutanhaat, etc. The police are helping them in absconding and the state machinery is letting loose a series of state terror on the agitators demanding the rollback of the power plant and justice for the victim. The naked collaboration of the police and the state machinery with the culprits and their joint attacks on the villagers show that they have to carry forward their struggle on their own, without expecting the government and the law to help them in a cause against the ruling clique.

During the Panchayat election, in which Arabul’s family members, including his son, are participating, the police unashamedly allowed the gangster to run a show of terror from the police custody by unleashing violence on voters. The police allowed a free-hand to the TMC goons in the Bhangar block and goons came from neighbouring Rajarhat as well to up the ante. However, despite the severe violence and terror, the Committee for Protection of Land, Livelihood, Ecology and Environment won the Panchayat election in Bhangar and their victory was a tight slap for not only the gang of Arabul but for the entire TMC and the Mamata Banerjee government.

Over years, Mamata Banerjee consolidated her political monopoly over the peasantry and villages of West Bengal using a pro-peasant credential she earned during the last leg of her opposition journey in the state. Since the era of Singur and Nandigram, she tried to project herself as a firebrand leader who fights on behalf of the poor against the big corporations. Bhangar smeared that carefully fabricated veil of Mamata Banerjee and laid it threadbare for the peasants to see the real character of the TMC government. The struggles waged by the people of Bhangar and Bhaba Dighi have exposed the fascist, anti-farmer and pro-corporate character of the TMC. The attempts by Mamata Banerjee to brutally suppress these movements by using bullets, bombs and batons show that in the new trend of anti-land acquisition movements of Bengal, the ruling party and its secret accomplice, the BJP, can see their forthcoming end.

The death of Hafizul Molla and that of Mofijul Khan and Alam Mollah will not go in vain if the people’s temperament is a barometer to measure the intensity of a mass movement. Though there is a lot of opportunist influence on the leadership of the

Committee for Protection of Land, Livelihood, Ecology and Environment, however, the villagers of Bhangar and its adjacent areas are not only seeing this struggle as one to save their villages and livelihood, but one such movement that will purge the filth of vile politics peddled by the likes of Arabul Islam and his family of gangsters.

It’s only a strong, united and indomitable struggle waged by the peasantry against the forced land acquisition by the corporate houses or the government in West Bengal that can change the political arithmetic of the state and can make the people fill the true welfare and true power.