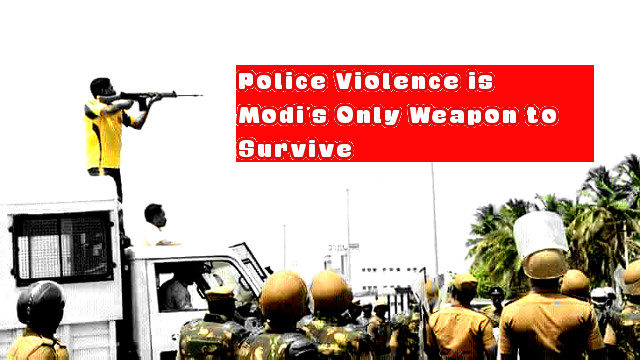 A nationwide outrage is taking place over the arrest of five civil rights activists in Maharashtra and Delhi, to combat which the Pune Police had to invent the dubious theory of an assassination plot prepared by these people in connivance with the Maoists to kill Narendra Modi. Though the loosely plotted story is busted by many, including this portal, the five arrested activists, including an advocate continue to languish behind the bars.

While activists throughout the country were agitating against this police repression on civil liberty movements and the arrest of these five activists who are falsely labelled as “terrorists” and “urban Maoists” by the Hindutva fascist regime and its lackey police force, the Chhattisgarh Police arrested a freelance blogger Abhay Kumar Nayak, who used to manage the blog www.naxalrevolution.blogspot.com in his own name and used to disseminate facts and figures of the Maoist movement that are also available on other public domains.

Soon after arresting Abhay Nayak, the Chhattisgarh Police laid all blame of Maoist propaganda on the shoulders of this young techie, who had been crucial in doing only one work so far since 2006, i.e. run a blog under his own name. Abhay Nayak’s writings are mere journals of the Maoist and other Naxalite trends and he has been made a scapegoat by the state machinery that wants to conceal its own crimes against the hapless tribals of Bastar and other regions of Chhattisgarh, against whom the Indian ruling classes and their state machinery has waged a violent war.

Following the lead from the Chhattisgarh Police, the notorious mainstream corporate media, which is more or less a lapdog of the Modi regime these days, started drumming the police story as Gospel truth and blamed Abhay Nayak of being a Maoist spokesperson. They spiced up the story by exaggerating on Abhay Nayak’s foreign tours to implicate him as one of the coordinators of the Maoist organisation called CCOMPOSA. Media trial against Abhay Nayak certainly condemned him of being the Maoist he never was.

The accusation of being a frequent traveller to foreign countries is labelled on Abhay Nayak in such a way as if travelling abroad to understand specific political movements, to do independent research on them or to attend foreign political programmes are considered criminal offence in a country whose prime minister used his four-year-stint to travel all over the world and awkwardly hug the head of states and governments during his visits. Abhay is also accused by the Chhattisgarh Police of being an acquaintance of Maoist leaders like Gudsa Usendi, knowing very well that Gudsa Usendi is an alias given by the banned outfit to its spokespersons and the last one, i.e. Gumudavelli Venkatakrishna Prasad was arrested by the Police in 2014 and then he was shown by the media as a leader who has surrendered to the Police. How could Abhay Nayak contact him through emails when according to the Police Prasad has become an approver against the ultra-left?

When the Chhattisgarh Police faced questions about the explosive act case that they are charging Abhay Nayak with, they told the media that Abhay Nayak is booked as they found the name of some Abhay during the 2013 Darbha IED blast along with another Maoist when some papers recovered by the police. When the namesake Abhay Nayak was found running a blog and then travelling around the globe, they connected the dots and arrested him. Abhay Nayak has denied the charges and his parents are seeking legal help to safeguard their son from the trigger-happy police of the BJP-ruled state.

Before the story of Abhay Nayak could draw flak from all over the country, the Tamil Nadu Police cracked the whip on the agitators resisting the forceful acquisition of land for the Salem Airport expansion and a 270 km-long eight-lane superhighway between Chennai and Salem and arrested activist Piyush Manush, who had been leading the struggle against the proposed project that will cause huge environmental damage to Salem. The Tamil Nadu Police also arrested actor and activist Mansoor Ali Khan, student activist Valarmathi for protesting against the fertile land acquisition from the farmers for the highway project. The environmental and social activists who were struggling on behalf of the affected farmers and villagers were charged under the notorious National Security Act to keep them behind the bars for a long time.

The Tamil Nadu government led by the AIADMK didn’t stop by cracking its whip on the activists protesting against the Salem-Chennai superhighway, the government also had television actress Nilani arrested by the Coonoor Police for criticising the police firing on the anti-Sterlite protesters in May, during which many people were murdered by the police. The popular TV actress made a video wearing a police uniform and criticised the actions of the AIADMK government’s police that’s working to appease the Narendra Modi regime in New Delhi.

As police repression against the activists, journalists and anyone with a critical mind and voice is gaining strength throughout India, it’s becoming evident that the Narendra Modi regime has become the most unpopular government and it’s indeed only the cheerleading and die-hard support of the 15 per cent elites and urban middle-class from the reactionary upper-caste Hindu society, who are driven by xenophobia and jingoism, that the BJP can make a come back in 2019.

To combat the strong waves of anti-incumbency, the BJP and its controller, the RSS, can only rely upon communal polarisation, however, the poor state of economy is even turning away the most backward sections of the society from the party, which has enough money to raise an army of its own but none to resolve the basic problems of food, clothing, housing, healthcare and unemployment. The crisis in the farm sector, in industry and the rising unemployment graph, is adding up to the woes of the BJP as discontent rising out of poverty and hunger can’t be seduced with communal vitriol.

Due to the rising tides of discontent throughout the country, ranging from the farmers’ movement in several states to trade union movements for better wages and job security, from the movements waged by environmental activists to stop corporate aggression on the leftover green space to the struggle waged by women, Dalits, tribals, Muslims and Christians against the patriarchal bigot Hindutva cavalcade, the Modi regime is seeing red everywhere.

As the past subterfuges of nationalism, Hindu cultural identity and development are no more working, the Modi regime is facing public ignominy and opprobrium for its utmost anti-people policies. This is the time when the Indian ruling classes, who are sinking in a quagmire of severe economic crisis, which is turning into a grave political crisis, have decided to do away with the sham democratic concealer that hoodwinked people since ages and reveal the real, grotesque, utmost fascist character of their rule to the people.

To realise their goal, the Modi regime and its puppet state governments of the BJP and its allies have jointly unleashed the most heinous type of state violence on the people and also carrying out intense bush telegraph through their army of rumour-mongers to run virulent campaigns that talk malaise against the Muslims, Christians and in many cases, the Dalit community.

It’s only because the majority of the poor have baulked to this propaganda and campaigning by the Hindutva hatemongers that the RSS attempt to seize control over the country and change the Constitution swiftly is not going ahead in leaps and bounds. Even a lot of cajoling of the lower-caste Hindus, Dalits and tribals to massacre Muslims and Christians isn’t giving large-scale success to the RSS, except in some pockets of North and Central India.

Now that the ruling classes have found that it’s difficult to rule and divide the people following the old style, it is searching and adopting new forms of exploitation and one among them is religious orthodoxy and fascism. The Modi government is walking the path shown by Recep Tayyip Erdogan of Turkey, who has successfully changed the secular character of the Turkish state to turn it into a Salafist fascist state.

However, the people of India, who are diverse and have rich histories of struggle against imperialism and feudalism, will not accept the all-out attack on their rights by the Modi regime and its puppets for long. This is the sole reason that they are fighting unitedly against injustice in Tamil Nadu, Kashmir, Rajasthan, Madhya Pradesh, Maharashtra, Chhattisgarh, Jharkhand, etc. By triggering the pre-planned Muslim lynching incidents, the BJP or the RSS cannot turn back the wheel of history that is all set to crush its fascist rule.