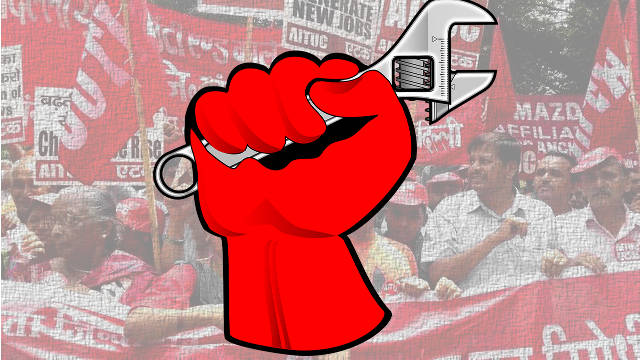 When the corporate-controlled mainstream media was busy broadcasting the updates on the no-confidence motion moved by a united opposition in the parliament against Narendra Modi’s government, they have carefully censored the news of a massive movement by a major power in the capital city. The workers of Delhi have gone for a one-day strike action on 20 July against the non-implementation of the minimum wages that the AAP-led Delhi Government had fixed in the city – ₹13,896. Despite a total media censor, 11 trade unions fighting for securing the rights of the working class in the city with ever-rising cost of living and apathy against the poor by the ruling classes, managed to shut down more than 90 per cent of industrial units, except for those where the police were deployed to protect the interest of the blood-sucking comprador capitalists who own those factories. The 20 July Delhi workers’ strike shook the foundation of corporate loot and plunder in Delhi as the exploited and the exploiter stood face to face.

During the 20 July Delhi workers’ strike, more than a million workers raised their fist demanding the implementation of the minimum wage that was decided and notified by the AAP-led Delhi Government on 3 March 2017. The minimum wages were increased last year by the Arvind Kejriwal government after a series of protests by the workers in the city, which frightened the AAP of losing its working class vote bank. The updated minimum wages in Delhi is given in the below table and the AAP government couldn’t implement it due to stiff resistance from the BJP-backed comprador capitalist lobby and foreign corporations, who are reluctant to pay a penny more to their over-exploited workers and employees.

Ever since the AAP government has issued the new wage rates, the comprador capitalists and the foreign corporations have taken all steps possible to stall the move. They moved court and though the court didn’t order a stay on the revised wages, it heard the case and reserved its order. On the other hand, all leftwing and progressive trade unions rejected the minimum wage of ₹13,896, as it’s too low for a worker to make a living in Delhi, where even drinking water costs Rs 20 per can. Most of the trade unions demanded that the minimum wage is raised to at least ₹20,000 so that the workers can survive. The 20 July Delhi workers’ strike was an affirmative action to assert the workers’ view that the crumbs thrown at them by the capitalists after sucking their blood are way too low for them to survive, forget living a productive life.

Due to the contractual nature of their employment, most of the workers in Delhi can’t organise themselves into official trade unions and bargain their wages with the labour contractors who deploy them in various factories. In areas like Bawana Industrial Area, Okhla Industrial Area Phase I and II, Naraina Industrial Area, Patparganj Industrial Area and Mayapuri Industrial Area, a large number of workers earn anything between ₹4,500 to ₹8,000 per month and stay in the most inhuman conditions. The fire in a factory of Bawana, where many workers were charred to death because their owner locked them from outside and left, exposed the terrible condition in which the working class live in modern Modi-fied India.

No political party, including the AAP, which had ruled Delhi or plays a crucial part in its urban political landscape, ever fights for the cause of the working class. The fear of isolating the rich and the super-elite upper-caste comprador capitalists who own the factories or manage the foreign corporations on behalf of their overseas masters, drive the political parties to treat the problem of working class with sheer apathy. The shameless hobnobbing between the RSS’ trade union – the BMS and the crony – comprador capitalists and foreign corporations also give a immunity to these parasite classes, who have been enriching themselves and filling their coffers with the ill-gotten wealth extracted by exploiting the labour of the poor workers who live in shanties in the outskirts of the city, or in the numerous ghettos isolated within the territory of Delhi.

Since the World Bank-IMF-WTO-suggested neo-liberal economic order was embraced by the Indian ruling classes in 1992, the industries were allowed to enjoy relaxed labour laws, which allowed the big foreign corporations and Indian comprador capitalists to exploit the working class more severely than before. The organised workers are in minority in the country where “casual labour” or workers on contract are mostly preferred by the capital to be employed in the industries. Due to lack of laws regarding contractual workers, the big comprador capitalists and foreign corporations can hire them on any amount of daily wage and make them work for equal hours or more than what a regularised worker does.

In Delhi, the majority of the workers are contract workers who have migrated from states like Bihar, Uttar Pradesh, Haryana, Madhya Pradesh, Jharkhand and West Bengal in search of a livelihood. Mostly employed in the factories of Bawana, Mayapuri, Okhla Industrial Area, Patparganj Industrial Area, Naraina Industrial Area, etc. They live in the most inhuman condition, suffer from chronic diseases due to lack of healthcare services and due to the rising cost of medical care in the city. After working for 14-16 hours a day in most of the factory units that operate under the patronage of local BJP leaders and the Delhi Police, these workers manage to save nothing even after working too hard.

By vilifying the trade union movement and the working class through their countless mouthpieces and media platforms, the Indian ruling classes have drawn a line of demarcation between the working class and its erstwhile ally, the urban middle-class. As the minority middle-class are trapped in the lucrative bait of a consumerist lifestyle, an aspiration to become rich and move higher on the ladder of social hierarchy divorced the mostly upper-caste Hindu section from supporting or participating in solidarity movements in support of the working class. Hence, the Twitter timelines, discussions around office coffee vending machines or in the compartments of the Delhi Metro would echo the fierce opposition to the working class’ struggle by a rapidly right inclining urban and mobile middle-class of Delhi.

In a country where crony capitalists like Dhirubhai Ambani or fascist mass murderer Hitler are adored as leadership icons, where trade union activities are barred for most of the workers and employees, however, the industry owners are allowed to organise themselves freely, a country where millions of tribal and Dalits are displaced every year for the sake of “development” whose fruit only the elite and upper-middle-class enjoy, it’s indeed too much to expect the government and the politically dominant middle-class to support the cause of the working class. The ruling Hindutva fascist dispensation under Narendra Modi is trying to curtail all forms of workers’ movement and restrict the scope of trade unions. The amended labour law by the Modi government gives the comprador capitalists and their foreign corporate masters a free reign to exploit and oppress the workers.

The BMS, which is the trade union arm of the RSS and a fascist labour lieutenant working on behalf of the big comprador capitalists and foreign corporations in the Indian working class movement, stayed away from the 20 July Delhi workers’ strike and it opposed the demand. It’s BMS that betrayed earlier the working class’ massive nationwide strikes during September 2015 and 2016. It has undertaken upon itself the task of preventing the working class from carrying out any assault against the comprador capitalists and the foreign corporations of the country. Thus, on 20 July Delhi workers’ strike, the BMS played the role of a fifth column entity within the heroic working class struggle in Delhi and betrayed the working class by siding with those comprador capitalists who fund the parent body of the BMS. The workers affiliated with the BMS were deployed to break the strike at many places and the leadership of BMS connived with the local police and factory management nakedly in South Delhi’s Okhla Industrial Area.

Though the case of minimum wages is sub-judice at the moment, the working class has got a hint that the comprador capitalists and the foreign corporate houses will manipulate the judicial process and use their clout on the Union and Delhi cabinets to mould the existing wage rules in their favour, which is a norm in India since the colonial era. The working class will be further pushed into the realm of barbaric enslavement by these capitalists and corporate houses who also own stakes in media. Thus, the workers, who will be pushed to the wall, will not have any other hope or option to look at but to intensify their struggle for existence by upgrading their struggle against the comprador capitalist-foreign capital-politician nexus to the next level – i.e. the level of political struggle aiming at power in the hands of the working class and its ally, the peasantry.

It’s true that the 20 July Delhi workers’ strike has caused panic in the quarters of the ruling class and they had to use the excuse of “no-confidence motion” placed in the parliament to shield themselves from the onslaught of the working class of Delhi, however, the struggle of the working class can’t end up at the trade union stage, where all struggles are mostly economic in nature. Unless the working class is politically educated, well-equipped and motivated to lead its vanguard section to the path of political struggle for power, the major issues that negatively impact the lives and livelihood of the workers, including low wages, bad living conditions, rising cost of living, etc. can’t be solved by mere trade union movements. Therefore, it’s time now for the working class of Delhi to learn from the historical experience of its struggle against the ruling classes, learn from both negative and positive experiences, by collectively analysing them and then march ahead to discharge its historic principal duty, i.e. the sacred task of defeating the Hindutva fascist menace and liberating the country from its clutches. The 20 July Delhi workers’ strike was just a small step towards that bigger goal; the workers must unitedly move ahead to achieve it.