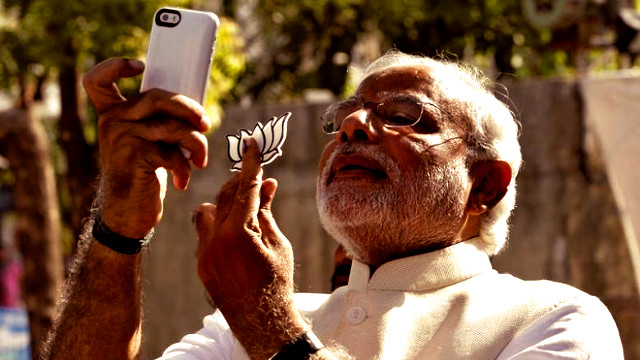 Narendra Modi played the klaxon of the poll battle of 2019 from eastern Uttar Pradesh, where he went to address rallies. By launching his attack against the Muslim community by using the Congress as a scapegoats,  Narendra Modi proved that despite ₹4,300 crore worth propaganda over his so-called development lullaby, the core election issue for the RSS and its progenies, including the BJP, will remain the age-old Hindu-Muslim antagonism, which the saffron camp fuels to keep itself relevant in a 21st century world.

During his Uttar Pradesh rally, where he met the BJP’s stalwarts and notorious riot-monger Chief Minister Yogi Adityanath a.k.a. Ajay Bisht, along with Ram Nayak (an old-time RSS leader and present Governor of Uttar Pradesh), the prime minister used the fake-news-based propaganda initiated by his defence minister, Nirmala Sitharaman, over Rahul Gandhi’s purported claim that the Congress is a “party of the Muslims”, to stir up a communal diatribe against the Congress, and through the Congress a vitriol against all political parties of the opposition who still subscribes to the ideology of secularism, even if in words.

In his bid to combat the opposition with an aplomb, Narendra Modi resorted to his familiar communal rhetoric mongering in Uttar Pradesh and West Bengal. Quoting a fake news in an Urdu newspaper, he claimed that he had “read about Congress President’s statement”, without informing the people how he deciphered Urdu, a language the RSS despise and none of its Hindutva thugs can read. Anyways, Narendra Modi said that he was not “surprised” knowing it and said that even the former prime minister once claimed that “Muslims have the first right on natural resources of the country”. The prime minister tried to reinforce the RSS’ view that the Congress is a Muslim appeaser party and is anti-Hindu in its standpoint through this gibberish and cunning statement.

While issuing these statements, Narendra Modi and his cohorts were sure that their core supporters and the crucial OBC and Dalit communities will be incited with this Islamophobic statement and they will cling to the Hindutva plank to safeguard their religious identity and status. Yes, this plan indeed worked and the BJP men were able to spread a communal discord using a canard. If we analyse the statement of the Prime Minister vis-a-vis truth, then we will realise what sort of slander-peddler he and his regime are and how they are thriving only on the xenophobia among the elite and middle-class, upper-caste Hindus regarding Muslims and India’s neighbouring countries.

Nirmala Sitharaman’s recent jibe against the Congress President Rahul Gandhi and his purported claim of Congress being a “party of the Muslims” was exposed before the people earlier by the participants in the meeting. It’s only Mumtaz Alam, the reporter of the Urdu daily Inquilab who’s still vouching for the credibility of the story. On the other hand, when Narendra Modi quoted the same story and Nirmala Sitharaman’s allegations, then he actually gave them an official endorsement, which is an act of suppressing the truth by hyping the lie.

When Narendra Modi quoted his predecessor Dr Manmohan Singh over the Muslim question and the latter’s purported declaration that the “Muslims have the first right on natural resources of the country”, then too, he did it quite selectively. It’s true that Dr Manmohan Singh is a lackey of the World Bank – IMF – WTO clique and he has been serving them since the 1970s. It was him, who officially opened the floodgate of Indian economy before foreign capital and took India to the stage of the neo-liberal economic model, i.e. the most brutal and notorious form of neo-colonialism. It was Dr Singh’s government that unleashed the most violent war of aggression against the tribal people of central and eastern parts of the country to evict them from their land, forests and rivers so that big corporations, foreign and domestic can plunder the resources. However, during his tenure as prime minister, he didn’t utter the words Narendra Modi is placing on his lips.

On 9 December 2006, while addressing the 52nd meeting of the National Development Council, Dr Manmohan Singh actually said “We will have to devise innovative plans to ensure that minorities, particularly the Muslim minority, are empowered to share equitably the fruits of development. These must have the first claim on resources”, which the Times of India published by tweaking the title in such a way that it will sound like Dr Singh said that the Muslims will have the first claim on natural resources. The choice of “these” instead of they, is a clear sign that the former prime minister was speaking on the “innovative plans” and not any community. Dr Singh even spoke about sharing the fruits of development with the Dalits and tribals, which one knows was a farce as these communities, including the Muslims, suffered horribly under his reign.

Anyways, when Narendra Modi has twisted the fact and peddled another lie in his series of incessant lies, then it must be reminded to him that during the reign of Dr Manmohan Singh the Muslims, the Dalits and the tribals lived a similarly pathetic life they are living now, however, though there was brutal state terror against them, which still exists, there were no lynch mobs killing people solely for their religious identity. Despite their enmity with the people and the subsequent violent war that his government unleashed on the people, Dr Manmohan Singh was right to say that the “innovative plans” that aim at sharing the fruits of development with the poor, marginalised communities and oppressed people.

However, the problem with Narendra Modi’s regime is, forget uttering any sympathetic words to deceive the marginalised people like the previous government, this government openly declares that the Dalits and tribals exist to fight and massacre Muslims and Christians on behalf of the Brahminical upper-caste elite Hindus; it claims that the lynching of Muslims or Christians is justified and either central ministers will felicitate the killers by garlanding them or rallies will be organised waving the national flag in support of such criminals. Narendra Modi’s regime understands only one truth – the Adani group, the Reliance group, the Vedanta group and other such corporate houses have the first and sole right on India’s natural and mineral resources, only these corporations and their fat capitalist tycoon owners have the right to enjoy the fruits of “development” that comes riding the barrel of gun.

Narendra Modi knows well that in a politically and communally volatile Uttar Pradesh, where the RSS has spent a fortune to raise a large army of rapists and thugs in each and every block, spreading communal vitriol using diplomatic tempo helps in communally polarising the politically backward masses, who are left vulnerable due to the absence of an alternative, anti-fascist, democratic and left-wing force that could educate, organise and lead them towards effective socio-economic change. Modi and his cohorts know that as long as the feudal rule remains intact in the state, the land ownership remains centralised in few hands and the caste system remains rock solidly founded on this base, there cannot be any real threat to the existence of Hindutva fascism.