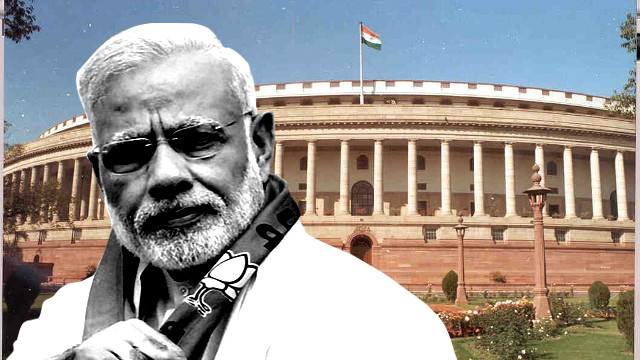 While Narendra Modi and his ministers were too nervous and panicked in March 2018, when the Telugu Desam Party (TDP) tried to bring a no-confidence motion against the government in the parliament, they look very confident as the Congress joined the fray in the monsoon session of the parliament and the BJP allowed the motion to be placed in the parliament with a debate.

Most of the opposition leaders, who thought that Narendra Modi will shy off from debate or answer the opposition in the parliament, overlooked, or rather, underestimated the shrewd prime minister, who knows well how to capitalise on situations that can generate political wealth for his regime.

Narendra Modi and the BJP has used the opportunity of the no-confidence motion very cunningly to derive extreme political mileage from the opportunity. Firstly, the BJP has issued a whip to all MPs of the party to ensure their presence in the parliament on Thursday and Friday, and thereby thwart any attempt by the united opposition attempt to bring down the Modi regime.

During the no-confidence motion, the BJP has prepared its gameplan in such a manner with the help of Speaker Sumitra Mahajan, that Narendra Modi will get the slot to speak in the evening, during the prime time, when the urban middle-class, elites from the upper-caste Hindu society will have ample time to glare at the TV screens. The political attempt by the opposition will be then turned into a mockery of democracy, as by using his expert theatrics, rhetoric and communal diatribe, Narendra Modi will try to pass the buck of failure to the Congress’ court and use the occasion to drum the beginning of 2019 Lok Sabha election campaigning.

BJP has fixed its strategy to lambast the Congress and pull it down to a sphere of contradiction, where Rahul Gandhi and his ilk can be portrayed as disarrayed, hopeless and opportunist to the people by the corporate media loyal to the Hindutva camp. The no-confidence motion will be the first major victory of the BJP and the Hindutva camp against the opposition parties.

The corporate media has already made the no-confidence motion a hit story before the monsoon session of the parliament when the BJP is all set to introduce the Triple Talaq bill to the Rajya Sabha and try to shield itself from allegations of conniving with corrupt corporate tycoons like Nirav Modi and Vijay Mallya by using the recent CBI case against former Union Minister, P Chidambaram in the Airtel-Maxis case.

While the cases of lynching of Muslims by the cow-terror gang affiliated with the Sangh Parivar, rising debts of farmers, falling rate of rupees, rising rate of petroleum and diesel, skyrocketing inflation, etc. are the issues on which the opposition is planning to encircle and criticise the Modi government, the BJP seems to have a solid plan that will completely overpower and thrash the opposition programme.

Firstly, the BJP lawmakers will continue to disturb the opposition members whenever they criticise the government and raise valid points. The BJP will use its recently declared MSP hike on Kharif crop as a weapon the counter the opposition allegations on the farm crisis reigning in India. It will use the failed “Make in India” scheme, the Mudra scheme, the Stand-up India and Skill India programmes to show its commitment to development and then give forge data to the parliament to show that it’s actually working.

Secondly, the BJP will counter the Congress as a party that appeases Muslim men only and use the case of Triple Talaq ban to bring a division within a section of secular democrats within the upper-caste and upper-class Indians of metro cities. The BJP will target the opposition with virulence and use the opposition’s demand of security and equal rights for the Muslim community to spread communal vitriol and unite the poor and socio-economically backward Hindus under its banner of Hindutva. Extreme xenophobia and religious chauvinism will be promoted to unite the politically backward Hindus.

Thirdly, by citing the recent FIRs against P Chidambaram and by invoking Nehru to Manmohan Singh for the failure of his government, Narendra Modi will attempt to hoodwink people on TV into believing that his regime is taking strong actions against corruption and not even sparing anyone. Indeed the utmost corrupt deals of the Modi government to help the Adani and Ambani enterprises to grow, including the recent accolade of “Institution of Eminence” the proposed JIO Institute, will be swept inside the carpet and the opposition’s hullabaloo will sulk in the cacophony of the treasury bench.

Throughout India, the poor people of the country, especially the working class and the peasantry, have lost their confidence in the Modi regime and demands its ouster. However, the ouster of the Hindutva fascist regime that bootlicks the big corporations, feudal landlords and foreign capital, can’t happen through the mere rhetoric mongering by the opportunist parliamentary opposition, who are no less fascist and no less Hindutva-inclined like the BJP. The real change can come through a well-planned and organised people’s resistance movement in favour of democracy, socialism and secularism; the real change can happen only by strengthening and widening the scope of the broad anti-fascist movement by all democratic and progressive forces of the country, to stop which and to keep themselves relevant, the shrinking violet opposition is moving a meaningless, toothless no-confidence motion in the parliament today.