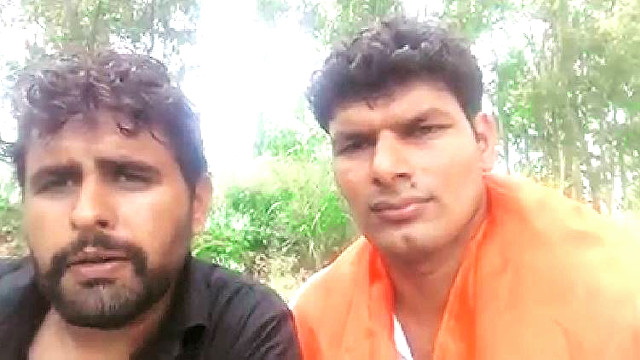 There is a literal trend of legitimising and mainstreaming terrorism after the Narendra Modi-led government was formed in 2014. Though there is no direct connection seen between the Modi regime and the growing violence against opponents of the Modi regime, the vulnerable minorities and the ostracised Dalits and Adivasis, it’s clear that the unapologetic demagogy of the ruling Hindutva fascist camp, the incessant flow of vitriol against the Muslims and opposition forces, who are shown as sympathetic to Muslims, which is now considered as a crime, and the impunity with which the perpetrators of communal riots, pogroms and mob lynchings operate, give a fillip to the aspirations of the wannabe fascists, the hoodlums of the Sangh-affiliated criminal organisations that call themselves socio-religious in nature to avoid scrutiny of their activities. The recent attempt of an attack on Umar Khalid, a former student of the JNU and an Ambedkarite activist, and the boasting of two men, who claimed that they played a pivotal role in planning and executing the conspiracy, on a video circulated by them on social-media, manifest the depth that the filth of toxic Hindutva fascism has penetrated in the Indian society.

It was quite a terrorist act for anyone to organise armed attacks on targets and then claim responsibility over video and help spread the same on social media until a few years back. The duo from Haryana, who claimed they’ve tried killing Umar Khalid on a video, which was widely circulated on social media, were unapologetic about their crime and following the RSS’ modus operandi, they tried to link their crime with “nationalism” to justify it. These two, who were later arrested by the Delhi Police, claimed that they were trying to kill Umar Khalid as a gift to the “nation” on the occasion of “Independence Day”, celebrated on 15 August. Their verbiage of dehumanising opponents of the Modi regime, their unapologetic assertion of a crooked “patriotic” identity and their decision to surrender at the home of revolutionary martyr Kartar Singh in Ludhiana, in an age-old Sangh attempt to usurp the legacy of the heroic anti-colonial revolutionaries to legitimise the terrorism spread by the entire Hindutva camp, show that how emboldened these people, or a large section of them, have become under the patronage of the Modi regime, as they now know that they can get away with any crime by uttering “patriotic” rhetoric of the RSS’ variant. This is why they tried to project themselves as “patriots” fighting for the “country” against those people whom the government and its toady media call “anti-national”. This is their immunity cover from law and media.

In a country, where questioning the government for big goof ups and even blatant corruption in procurement of military aircrafts is called sin but a union minister can easily garland convicts of mob lynching to garner electoral benefits, it’s quite easy for people to gain the status of “patriot” by hacking a Muslim to death and then setting him to fire on video, then it’s easier for two Hindutva-incensed men from Haryana to earn fame and gain political weight by merely attempting an assassination on a young man who just questions the government and its action. Now, these men can really expect to become literal celebrities for the bigot Sangh outfits; there maybe processions with their tableau organised by the RSS or the Bajrang Dal during Dussehra, they may even get tickets from the BJP during the 2019 general election.

Amidst this ugly muscle flexing by the arch-reactionary powers, the criminals who are mainstreamed by the overt support of the establishment, how could one justify that there’s anything remotely resembling “rule of law” present in the country, where the lawbreakers, serial abusers, criminals accused of rioting, genocide, rape and corruption are the rulers? With people like Narendra Modi and Amit Shah at the helm, ruling with the support of serial hate mongers, Hindutva rabble-rousers, rioters, rapists and murderers, any talk about “rule of law” and “justice through the system” are fancy dreams of an unplugged liberal mind. The reality is laced with gory atrocities against true opponents, bloodshed and legitimation of persecution only. The hypnotised educated middle-class, whose members belong to the upper-caste stratum of the Hindu religion and who loathe the poor and the working class, in their quest to reach higher echelons of the social order, have sold political conscience in lieu of a promise made by Narendra Modi and his coterie. No, it wasn’t ever about development, but about realising their fetish of dehumanising and subjugating the “others” in the Indian society, i.e. the Muslims, Christians, Dalits and tribals, mostly the poor members of these communities. The Modi regime has given them that official opportunity to become unapologetic fascists and still prosper in all endeavours. This is Modi-fied India, where scholars like Umar Khalid faces the gun and the hardcore Hindutva fascist hate mongers enjoy ministerial berth.

It’s an irony that the programme that Umar Khalid was going to attend at the Constitution Club was named – “Khauff Se Azadi” (freedom from fear) where the topic of discussion was the shrinking space for free and critical thinking in India due to the constant fear-mongering, threats and abuses hurled by the ruling clique and its mainstream yet “fringe” supporter base. An attempt to attack one of the participants of such an event shows how important the task of resisting Hindutva fascism in all of its forms, from the mere propaganda level to the level of extreme violence and lynching, has become in the present context, where mere token protests and elitist approach to fascism will not bear fruits. The attempt of the attack clearly showed that the Hindutva fascists won’t let the Constitutional rights of fellow Indians survive for long.

Under the Modi government, a narrative of a “nation under siege” is built up by the incessant discourse on a purported “Islamic” threat looming large on India, which has helped to spread enough xenophobia in the society and turned a large number of otherwise normal people into paranoids and hardcore bigots. The idea of India is integrated with the idea of Hindutva, the identity of a “Hindu India”, where either the minority communities remain as slaves of the ruling community, i.e. the Brahmanical upper-caste rich and super-rich, or they perish in a reign of utmost discrimination, selective violence, mob lynchings, and, above all, state-sponsored terrorism. The Muslims are made “others” in their own homeland by claiming that the land belongs to a particular community. The “others” are disenfranchised, denied employment, housing, right to eat the food of their choice, right to practice their religion and right to be different than the majority community by constantly mixing their identity with the identity of an imaginary – enemy of the nation.

The toxic ideology of Hindutva fascism has entrenched so deeply in our society that we don’t stop finding a lot of sensible person around us converting into Hindutva fanatics. It’s not that they were nice people who suddenly got impacted by the despicable evangelism of the ruling BJP and its ideological master, the RSS; rather, these people have actually unleashed their true self now, they can speak their mind now and spew the venom that they have been holding back since time immemorial. The BJP has opened the floodgate of anger and hatred that the upper-caste, elite and urban middle-class Hindus were holding against the Muslims, the Dalits, the Christians and the Adivasis; basically against everyone but themselves. The BJP has normalised hatred and bigotry, and it has given them a new language with an unapologetic approach. This has indeed helped the 21st century India’s educated upper-caste elites and middle-class bigots to raise their fist in support of assassination attempt on people who have been fighting for, or like Umar Khalid, at least becoming vocal against, the oppression and exploitation ladened on the marginalised people. This is why assassinations, like that of Gauri Lankesh’s, or mob lynchings, like that of Pehlu Khan or Junaid, are celebrated in India by a group of nincompoop parasites who call themselves “nationalists”, and many of them enjoy the privilege of being followed on social media platform by the Prime Minister himself.

India needs resistance against Hindutva fascism to prevent the killing machine from advancing one more inch ahead; however, more than that, India needs a political education that will teach the poor, the torchbearers of democratic revolution, about the peril of communalism, bigotry and fascism. The poor need to learn about the peril of fascism not from other versions of fascists, but from those who can lead their struggle to its justified goal of establishing a new democratic, progressive, secular and socialist India. To educate the poor and to stop the fascists from capitalising their poverty to create more foot soldiers from among them, it’s very important that the message of anti-fascist struggle is taken to the people and they are equipped with the politics that can empower them to defeat Hindutva fascism and its bootlicking lackeys. It’s time we reclaim India and its resources from the Hindutva fascists and their comprador capitalist – feudal landlord masters, who are trying to kill us all by dipping in a pool of blood spilt through fratricide and genocide. It’s a now or never moment for everyone looking forward to bring down the empire of the Hindutva fascist tyrants. Either we fight now or we perish under the juggernaut of Hindutva fascist aggression, the choice may be our’s but the future generations will be those who will bear the brunt.