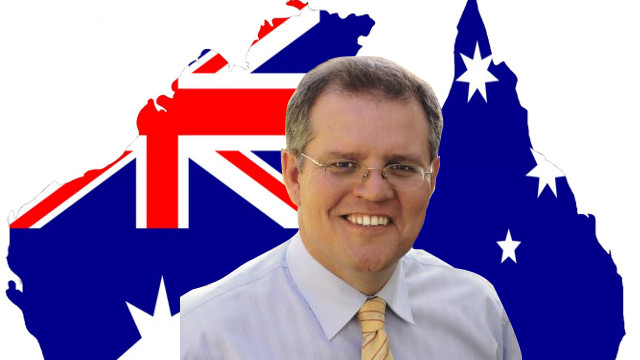 With the appointment of Scott “Stop the Boats” Morrison, an ardent Christian fascist, as the prime minister, Australia has officially started its journey towards the realm of anti-immigration fascist power-ruled new world order, represented by the likes of Donald Trump, Vladimir Putin, Narendra Modi and other stooges of the US monopoly and finance capital in the world. White supremacist fascism will now become the official policy of the Australian state. With Scott Morrison becoming the prime minister, Australia officially became one of the major fascist states in the world.

The 50-year-old Christian fascist,  Scott Morrison, is one of the strongest opponents of any entry of asylum seekers or immigrants to Australia, the land colonised by the British Empire by exterminating a large section of the aboriginal people. He is strongly against the non-white people living in Australia and prefers a fascist rule of Christian fundamentalists who would dominate the family lives and the social order of Australia. Scott Morrison, alike his settler forefathers who occupied Australia and colonised it, believes in forcefully evicting the non-white people from Australia and supports the persecution and political delegitimation of the aboriginal people.

This fascist Scott Morrison became a popular figure among the rich and the powerful Australians, and a section of the white supremacist Australian middle-class due to his stint while holding the immigration portfolio in 2013-14, where he implemented the controversial “Operation Sovereign Borders” to stop asylum-seekers arriving in Australia by boat from countries with dodgy human rights record.

Going against all sort of humanitarian norms and international procedures related to refugees fleeing persecution, the military operations undertaken by this unapologetic white supremacist fascist leader mostly targeted the hapless poor people arriving Australia on boats and they were forcibly sent back to where they had come from or transferred to remote Pacific island camps. Scott Morrison is responsible for the torture meted out to the asylum seekers and immigrants, which he tried to cover up using his evangelist sermons to bloodthirsty white supremacists.

Human rights groups throughout the world slammed the inhuman condition prevailing in the camps on Manus Island in Papua New Guinea and Nauru. Asylum seekers who were forcibly sent there, have to languish for years in utmost inhumane condition and still without any ray of hope of getting relief. This situation is created by Scott Morrison out of his sheer hatred for the non-white and non-Christian people. Under his reign in the immigration office, the white supremacists considered Australia as their fiefdom, a territory that they own, while they actually are intruders into the land owned by the aboriginal people whose land and resources are usurped by the white settlers.

As an ardent lackey of the US-UK-EU nexus and the globalised neo-liberal economic order, this anti-immigration fascist tyrant Scott Morrison though opposes people coming to Australia to escape persecution at their home countries or to earn a better livelihood, he is an ardent supporter of big foreign capital investment in Australia, even at the cost of destruction of the environment. This is a reason that the Liberal Party-led regime in which he was a treasurer even allowed a $900 loan to Adani’s Carmichael coal mine to build a rail link at a time when world’s largest coal mine is all set to face debacles due to the volatility reigning in the tumultuous international coal market.

The Liberal party’s love affair with debts and its sheer disregard for public healthcare, education and social welfare spending vis-a-vis its servility towards big foreign capital and banks revealed whose interest this old government under a new Prime Minister will serve. The ascension of Scott Morrison to the post of prime minister is a sign that the reactionary ruling classes of Australia are unable to resolve the crisis that has plagued the country’s capitalist system and has created huge problems like increase in unemployment, cuts in social welfare expenditure and rising wealth gap.

The rulers of Australia, too, need the service of the fascists who would show utter disregard to human lives, values and democracy to push forward their idea of building “nationalism” using reactionary binding forces like colour, creed, religion, etc. In this circumstances, someone like Scott Morrison can be considered more than a blessing for the ruling classes of Australia.

Australia’s fate will not be better than the US and other countries reeling under the juggernaut of white supremacist Christian fascism till the time the fascist bloc led by Scott Morrison and his ilk are booted out. Until that hour, the people of Australia, the working class and its allies must intensify the struggle against the right-wing anti-people regime of Scott Morrison.