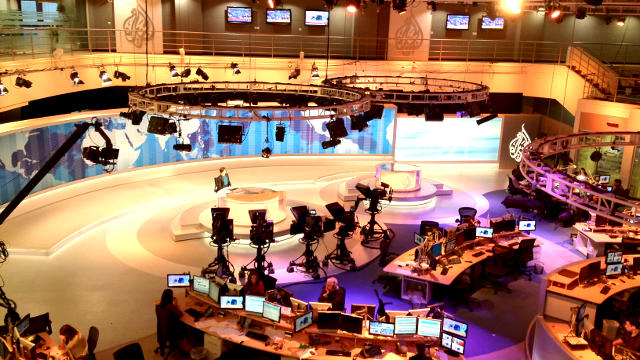 The Home Ministry has recently cancelled the security clearance for Al Jazeera English channel, which the Islamophobic RSS-led Hindutva fascist camp has long considered their ideological enemy for portraying the hapless situation of the Muslim community in India. Though the Al Jazeera channel is funded by the reactionary ruling clique of Qatar, which is playing a vicious role as a US puppet in the Syrian war, the sudden withdrawal of security license by the Home Ministry following an objective analysis done by Al Jazeera on the Kashmir problem shows how frantic and frustrated the Indian ruling classes are over the topics that can reveal their true fascist character before the people of the world.

While in jargons of bourgeois democracy the press is considered as an inalienable pillar of democracy, the gagging of the press at the whims of the ruling classes is a common affair as well. In a quasi-democratic structure like India, the ruling classes and their regime demands obeisance from the press and any sort of critical reporting, coverage or analysis draws flak from those in power. It’s not that Al Jazeera, whose reporter was paralleled with ISIS terrorists by the RSS’ Ram Madhav sometime back, is facing the wrath of the Indian regime for daring to show its atrocities on the Kashmiri people fighting for their freedom from Indian occupation, rather, there are a host of other media organisations that are facing the wrath of the state for even slightly deviating from its pre-set conditions.

According to a report by the Economic Times, permissions for 147 tv news channels were cancelled under the reign of Narendra Modi between 2015 and June 2018. Several tv channels including the ABC News, Voice of Nation, Focus NE TV, Jhankar News, Maa TV, Bhakti Sagar, M Tunes, Lemon News and their subsidiary channels have been denied licences over security reasons by the Home Ministry. Though when the tv channels that as the Modi regime’s propaganda machinery, vitiate the communal atmosphere by ranting bigotry-laced rhetoric every day, then they don’t turn into potential security threats for the country.

While the documentary on Kashmir narrates the uncensored, yet toned down, story of the people of Kashmir, the tv channels like Zee News and Times Now did broadcast fake content to malign the opponents of the Modi regime by morphing videos to show that students in JNU were sloganeering against India (though it’s not a criminal offence in a democratic society). Despite being caught promoting fake news and doctoring videos to suit the interests of the ruling dispensation, no actions were ever taken against the Zee News. It’s obvious, those who remain critical to the tyrant will face the music in the tyranny.

Al Jazeera is not a poor man’s media outfit and it violated the standards of fair and objective reporting on many occasions over Syria and other issues where the Qatari monarchy is closely connected. At times it had criticised the US and the Zionist Israeli policies in Middle East Asia, while at times, it compromised with them. Still, in its India coverage, Al Jazeera provided some critical analysis of the present Indian dispensation and its fascist approach towards the minority communities in India, especially the Muslims. Over Kashmir, the Al Jazeera, like most foreign media organisations, didn’t budge to the official Kashmir narrative presented by the Indian state machinery and quite rightly it provided, on several occasions, the true picture of the conflict between Indian occupation machinery and the people of Kashmir.

Security clearance for media organisations from the Home Ministry is a colonial-era practice that the Indian ruling classes have carried forward unapologetically until now. Under the guise of protecting India from a purported “foreign conspiracy”, multiple layers of censorship is imposed on the media in India, which is antagonistic to the idea of a pluralist and liberal democracy, if something like that ever existed on earth. The censorship on media through the state machinery is supported by all major parliamentary parties, who have at least one chance to rule the country or a state. This censorship is now tightened under the Modi regime and India’s press freedom index ranking dropped from 136 globally a year ago to 138 in 2018.

It’s so appalling to see utmost silence reigning in the Indian media industry and amongst the top-notch journalists of the country over Al Jazeera’s security clearance revoked by the Home Ministry. Total servility towards the Modi regime and the dominance of Islamophobia among the largely Brahmanical media organisations have made the critical and sanest voices in Indian media industry a minority at a time when majoritarianism has turned into violent, feral mob of lynchers. Though there are meek protests from the minuscule part of the sanest journalists, it will be soon overlapped by the rhetoric on RSS’ version of “patriotism” by targeting the Al Jazeera as a new “Muslim” enemy.

For India to become a vibrant people’s democracy and a strong socialist and secular country, a critical media that will spare no institutions or individuals is a mandatory requirement. Such a media ecosystem can’t emerge from the present servile media system that itself is a docile tool of the ruling classes to extend their rule. It’s upon the ashes of the present corporate-controlled mainstream Hindutva media that a free, democratic, transparent and critical media system can be built and can survive. Until then many more media organisations will face the clampdown like Al Jazeera.