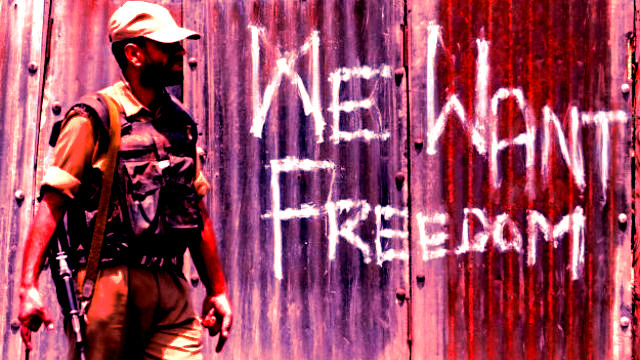 Indian armed forces fired indiscriminately at civilians and killed seven in the Sirnoo village of the India-controlled Kashmir’s southern district of Pulwama on Saturday, 15 December. The civilians include bystanders and protesters who raised slogans against Indian occupation after a an encounter setup by the Indian government forces killed three local militants. Militants fighting against Indian military occupation are hailed as freedom fighters by the local population in Kashmir.

A combined team of Indian Army, the CRPF and the local police raided an orchard in Sirnoo village and killed three militants, including a former soldier who became a militant; one soldier also died in the action. Learning about the encounter, which started at the dawn break,  the locals came out in large numbers to protest against the Indian occupation on Kashmir. Panicked at the sight of a large number of civilians protesting against its action, the military opened fire on the bystanders and protesters, killing six on the spot while one died at the hospital. Scores of villagers from Sirnoo, Pirchoo and Kareemabad received gunshot or pellets injury and were rushed to hospital.

Two teenage students, a government employee, an MBA-graduate who had been working in Indonesia and a local mechanic, were among the seven civilians killed in Sirnoo village of Pulwama. Most of them were bystanders and the Indian forces shot them either at head or chest to ensure their instant death. An eighth standard student, Murtaza Ahmad of Pirchoo village, was the youngest among all victims; he received a bullet injury in his head. Murtaza Ahmad’s death is one of the examples after 18-month-old baby Hiba, who was blinded by the pellets of Indian forces, that the Indian government forces doesn’t discriminate between adults and children while spraying bullets.

Throughout the valley, the separatist leaders called for a 3-day-long shutdown, which didn’t find any opposition from the valley’s mainstream political outfits. A frightened Indian government banned the internet, imposed a curfew, at different places, and rounded up the separatist leaders who called for a march against the ghastly massacre in Pulwama. The markets and establishments, except few, remained mostly closed during the shutdown phase and a large number of people came wailing at the funeral of the victims, echoing the demand for ‘Azadi’ (freedom) from India.

A few months ago, the BJP snapped its ties with the People’s Democratic Party, one of the two major opportunist, pro-India political outfits of Jammu and Kashmir, ending their three-year-long honeymoon government in Jammu and Kashmir. By imposing a hardcore RSS man Satya Pal Malik as the governor of Jammu and Kashmir, the Modi regime is running a brutal, undemocratic and martial government without even the slightest shroud of modesty or modernity. The violence has become horrendous and the number of deaths is climbing faster than ever.

By dissolving the state assembly and even turning away the major pro-India parties from their share of the booty of Kashmir, the Modi regime has not only torn the last façade of ‘democracy’ and ‘representative government’ that New Delhi had been dangling before the people of the valley to douse the fire of resentment among the common people against Indian rule, but it also sealed the fate of Kashmir where street battles, violence and total chaos will now dominate the political discourse than the efforts to start a political process to end the impasse and engage all stakeholders, including India and Pakistan, to find out a real resolution to the problem.

Though the armed forces issued a formal apology note on the killing of the civilians, however, unlike civilised nations, the Indian rulers will never enquire into the killings and take action against the guilty. The license to randomly kill, maim or torture civilians of Kashmir is granted to the military forces through the draconian Armed Forces Special Power Act (AFSPA), which provides an immunity from legal repercussions to the soldiers. Military leaders believe that this impunity helps the ebullient soldiers to gloat over the sufferings of the Kashmiris and thereby earn a sadist motivation to continue their brutal occupation.

Since years, the Indian armed forces are provided special power to kill, maim and torture the local population in Kashmir, including sexual violence against women, without having to worry about the possibilities of facing any political repercussions. For the Indian state, especially with the Hindutva fascist Narendra Modi government at the helm, the subjugation of the Kashmiri people through military repression is a political brownie in a highly communally polarised India. The more blood is spilt on the streets, the more political mileage it gets in appeasing the bloodlust of its hardcore upper-caste Hindutva fanatic vote bank. Thus, even after being criticised for its notorious Kashmir policy, the Modi government didn’t show any sign of course correction as strengthening the colonial grip on Kashmir is a way for it to fan chauvinism and jingoism among Indian Hindus.

For the people of Kashmir, 2018 has been the bloodiest year vis-a-vis recent years, especially after the people’s resentment reached its peak after the killing of Burhan Wani, a young celebrity militant leader, in 2016. According to data, more than 425 people, including militants, have been killed by the armed forces in Kashmir between 1 January to 15 December 2018, which makes it the bloodiest year after 2008 when 505 people were killed by the government.

The brutality with which the Indian state continues to kill innocent Kashmiris or those demanding its freedom shows how desperate the Indian rulers have become to hold on to the territory whose land and resources they want to exploit and whose people are treated as an expendable mass. In its bid to become a reactionary regional superpower the Indian ruling classes have been quite aggressive on the Kashmir policy and are leaving no stone unturned to keep the people of the colonised region suppressed under its military jackboot.

As India is a large market-friendly country that has embraced foreign monopoly capital and is an integral part of the neo-liberal economic order set by the IMF, World Bank and WTO, thus, bodies like the United Nations and the so-called ‘human rights’ enthusiasts of repute do not interfere in the matter of Kashmir’s tragedy and no one condemns or takes punitive action against the perpetrators of some of the most ghoulish crimes committed against humanity in the Kashmir valley.

Pulwama is not seeing blood for the first time, Kashmir is not seeing blood for the first time. In the last seven decades, the people of Kashmir have seen a lot of bloodsheds and they have become habituated with the blood spilt on the streets, at times bodies of their near ones lying in the pool of blood, cold dead. This otherwise horrible optics is  an integral part of Kashmir’s quotidian existence. The Modi regime will carry on its endeavour to exterminate and enslave the Kashmiri people by running the Hindutva fascist juggernaut over them. Thus, it’s important that the people of Kashmir are united under a common democratic, revolutionary and progressive banner, and they are aroused to struggle against the injustice meted out by the Indian rulers and their local sycophants. Unless the people’s struggle is united, focused, organised and is of a protracted nature, winning a victory would be impossible for the people of Kashmir and the ‘heaven on earth’ will be forever quagmire in violence, bloodshed and wailing.