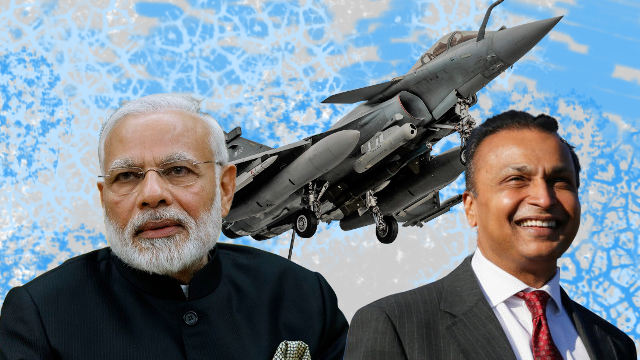 The petition to investigate the Rafale Jet deal for a possible scam was dismissed on jurisdiction, not on merits by the Supreme Court. The Supreme Court is not an investigative agency and what it does now is beyond belief of the common people. It is the infernal arrogance of Prime Minister Narendra Modi that is the primary cause for this state of affairs. The CBI cannot initiate any meaningful investigation into the Rafale Jet scam without the knowledge, authorisation and the cooperation of the government.

The Modi government and the CVC still have the power of superintendence over the CBI. If the BJP had agreed to the Joint Parliamentary Committee (JPC) investigation, things would not have come to this pass. The major political parties should realise that the authority of the parliament (legislative) and the executive are being slowly eroded. Over the years since Narendra Modi ascended to power, the institutions of India lost their autonomy and all powers are gradually centralised by the prime minister and his coterie.

Now the Indian Supreme Court is treading on dangerous grounds when it’s acting like a big boss and orders the government around. In the Rafale Jet’s case, it has clearly jumped the gun. The Rafale Jet PIL in the apex court was not filed by the Congress, rather it was filed by three different individuals. Two of them belonged to the BJP not long ago, and they were at one point of time even in-charge of the National Committee of the BJP.

In order to capitalise the Rafale Jet scam, the Congress and the opposition should do this politically, not through the judicial route. They must go and explain about the deal to the common people at the grassroots and ask them to decide whether or not the Rafale Jet scam is a case of sheer corruption and not an “electorally” (Just like the BJP did during the 2G).

The Modi government is not helping in resolution by not putting the costs per a/c in the public domain or alternatively allowing a JPC probe into the allegations, which it refuted as baseless. It will be good if the Supreme Court order rather than silencing the controversies regarding the Rafale, has accentuated it to a scream. It was beyond the preview of the apex court why the previous agreement of 126 fighter jets was scaled down to only 36, also regarding the choice of the offset partner, the apex court didn’t go into details; moreover, a fictitious CAG report was submitted before the Supreme Court, it’s not possible for the Supreme Court to examine the veracity of that. We cannot afford a Bofors like saga repeating itself affecting future defence procurement in aviation assets for two or three decades.

If the Modi government is so clear and confident about its role in the Rafale Jet deal with Dassault Aviation, then there is no harm for it in constituting a JPC to probe the deal because the Supreme Court did not say anything about the price of the planes. In its observation, the Supreme Court has mentioned only about the process of purchase and not about the revised higher price paid for the jets. No item (either equipment or even) may be more than three times expensive than its basic model. The Rafale Jet is sold to many countries by France and their specification will also be known to various global weapon companies, and moreover, none is asking for the specification of the jets from the Modi regime.

A JPC may only see the price and some other irregularity. If the BJP thinks that the deal is absolutely fair, then what is the harm in constituting a JPC as earlier it has been made in some cases on demand of the BJP? If one buys the basic unit at 9 per cent lower rate and buy the accessories at 200 per cent higher rate then what would it mean? This is the case with Rafale Jet purchase. And this is the reason why the Modi regime is not agreeing to form a JPC.

Dassault site shows a particular value which is approximately thrice the cost per plane of what was given by the Modi government’s own RRM to the Parliament in November 2016. Stalling an issue like this works to the disadvantage of the government itself, though it may mean a temporary reprieve from investigations and rigorous questioning.

The nation wants to know why are we paying thrice the amount for the Rafale Jet procurement? What is quite remarkable is that neither Congress and other opposition parties or the three litigants, among whom two are former BJP ministers, are not asking for the scrapping of the deal. All they are asking for is to have a JPC investigate the procurement and the price that the Modi government has agreed to pay for the jets.

The original deal was for 126 fighter jets of which 18 planes were to be directly purchased in a fly-away condition and the rest were to be manufactured in India with technology partnership. The selection was done by the Indian Air Force who did test the operations of the Rafale Jet between 2007-2012. Dassault was a company in desperate need of business when the Indian government agreed to purchase the jets from it, which is why the only negotiation was on towards technology transfer. The scam started when the number of jets came down to 36 from 126 and technology transfer was reduced to mere ‘spare parts’ and maintenance of the jets. No convincing explanation has come yet for this drastic change in the deal, which rings an alarm.

There is no point in going with the high priced deal if not for the technology transfer to India. This was effectively diluted and totally reduced to ‘spare part/maintenance’ business by bringing in incompetent partners (Reliance Defence of Anil Ambani), who have zero experience in aviation, forget military aircraft. Dassault has successfully achieved what they wanted, sell few high priced jets without transfer of high-level technology. If not for technology transfer, India could have gone with much cheaper Sukhoi, from one of its most trusted partners- Russia.

Dassault is a partner in the scam and its role must be probed by an independent investigation. The DRDO and ISRO are almost the same, however, since it involves more money and defence experts, thus the DRDO is called a white elephant while ISRO gets all accolades.

They both are dependant on foreign collaboration and most of their projects need critical support from other countries. The Modi government has openly made fun of a reputed public sector unit like the Hindustan Aeronautics Ltd. to favour a bank defaulter of several thousand crores who has zero experience in aircraft. It’s not merely cronyism and a defence purchase scam, it’s also an effort to jeopardise India’s national security by the Modi government and thus this scam needs a total exposure every possible way. When scams are swept beneath the carpet by those in power, they return back to haunt them for a long time. We are aware of the history.