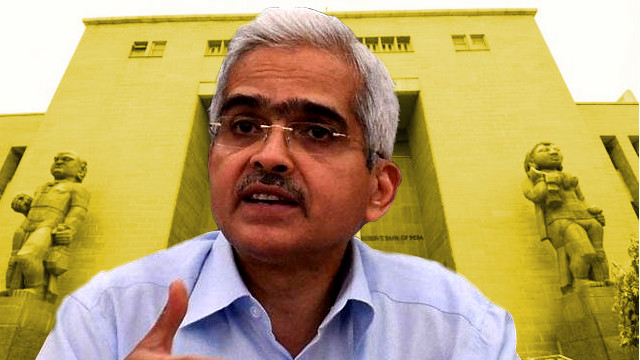 The appointment of Shaktikanta Das, a 1980-batch IAS officer of Tamil Nadu cadre as the governor of the Reserve Bank of India (RBI) has drawn a lot of criticism and ignited a big controversy in the economic discourses around the country. Shaktikanta Das is the first RBI governor in 28 years who isn’t a banker or an economist but an IAS officer, who is a history postgraduate and a finance diploma holder. His appointment, hurriedly done after Urjit Patel resigned over his difference with the Modi regime, which has been trying to tighten its grip over the functioning of the RBI, did create a ruckus, however, the Sensex rose considerably to 629 points after he was appointed, a signal that the Indian ruling classes have endorsed the man who would be helping them with a huge amount of finance capital in the days to come.

Despite dancing to the tunes of the Modi government, the RBI administration under Urjit Patel tried to follow the guidelines set for the central bank by Raghuram Rajan, which includes their bid to bring in a financial discipline in the banking sector regarding credit. Though the RBI and Urjit Patel, one of Modi’s erstwhile favourites in economic affairs, supported the Modi regime’s cataclysmic demonetisation exercise, however, the central bank’s administration didn’t budge to the government’s quest to have more control over the RBI’s functioning and its reserve fund. This created rancour between the Finance Ministry and the RBI authority, which eventually led to the downfall of once-upon-a-time Modi’s lackey Urjit Patel.

Shaktikanta Das was chosen as the RBI governor by the Modi regime not only for his pro-Modi stance during the last leg of his career as an IAS officer between 2015-17, especially his puerile advocacy of the catastrophic demonetisation drive and his ridiculous claims as the spokesperson of the exercise to shield Narendra Modi and his coterie from any allegations, rather he has been picked for the position due to his tainted career as a bureaucrat in which he was found siding with the powerful corporations, ministers and who-is-who of Chennai and New Delhi.

During his stint as Tamil Nadu Industry Secretary, Das reportedly allotted 100 acres of land to an American corporation- Sanmina SCI Corporation in 2007 at 1970’s rate. He was also instrumental in helping the big corporations grab prime government land at throwaway prices or even for free. This corporate-friendly nature of this seasoned bureaucrat made him a friend of the most notorious corporate bootlickers in Indian politics. Thus, from being a trusted aide of P Chidambaram, the former minister in UPA regime and United Front government, to being close to Narendra Modi as a defender of the demonetisation exercise, Shaktikanta Das is a multi-role player in the colourful world of bureaucratic deceit and corruption.

Apart from helping P Chidambaram in the Aircel-Maxis scam during the rule of Narendra Modi by diluting the investigation into the case, Shaktikanta Das even played an instrumental role in changing the public prosecutor of the case and in filing false testimony in the court to remove the investigation officer of the case, Rajeshwar Singh, from the probe, which was later rejected by the apex court. Shaktikanta Das helped Narendra Modi’s big-ticket donors like the Adani Group, Essar, etc. by dissolving the charges against them in the Rs 300 billion coal import scam.

Former RBI governor, Raghuram Rajan, strongly advocated that the public sector banks, especially those with severe bad debts, control or stop their big-ticket lendings and focus more on recovering the debts and improving the financial health. Urjit Patel’s administration also agreed to this line on principle due to the epidemic proportion of the bad debt problem in the public sector banks. The rigorous discipline imposed by the RBI on the public sector banks was hurting the interests of the big corporate houses, Indian and foreign, who have been using money borrowed from the public sector banks to expand their business and earn an immense profit without worrying about returning the money.

The RBI directives was also going contrary to the Modi government’s plan to infuse capital into the public sector banks to ensure they stay in business and to bring in a bail-in law, which would arm the banks that suffer the crisis of bad debts, to convert the money normally lying in the bank accounts of common people into fixed deposits without their explicit consent. For the Modi regime, it’s imperative that the corporate houses keep getting money from the public sector banks and that money isn’t returned to the bank with interest by the rich. Shaktikanta Das is the right choice for this job.

As the general election 2019 knocks the door, the Modi regime and the RSS are keen to have a gimmick, including some lucrative economic bait through some scheme that will place the Modi regime higher on the populist chart, especially in view of Congress’ series of farm loan waivers in Chhattisgarh, Madhya Pradesh, Rajasthan, the three former BJP-ruled state where the party came to power riding on farmers’ discontent. In case the Modi regime will announce an ambitious financial package, including a loan waiver for farmers, then it will have a huge budget deficit, which will be impossible to close. The only way the government can do a stop gap thing is by laying its hands on the immense reserve fund of the RBI.

More than Rs 10,000 billion are kept as reserve surplus by the RBI and the government is keen to have this money to bankroll its ambitious projects to lure the voters at the eve of the Lok Sabha election. It will be an easy glide for the government if it claims and wins ownership of the RBI’s reserve surplus, however, it will be a disaster for the national economy as there will be a severe fund crunch in case of any exigency or currency fluctuation.

For the Modi regime, pushing the economy to the brink of a major catastrophe won’t be a problem if it can reap good political dividends for the BJP. The courtiers are thus craving for the end of RBI’s autonomy and making it mandatory for the central bank to share its surplus reserve with the government and fund its projects, whichever it may deem necessary to earn political populism for a short-term goal. In such a dire need, a man who can have the public sector banks reeling under heavy NPAs still lend out big-ticket loans to the ilk of Modi’s corporate donors, a man who can provide the government access to Rs 10,000 billion for its propaganda and political gimmicks, can be a catch for the Modi regime. Thus, Shaktikanta Das is going to stay at the helm of the RBI despite the opposition of the people, the economists and even Das’ yesteryear patron, P Chidambaram.

While the sections of the comprador and crony capitalists whose interests the Modi regime is serving wholeheartedly are happy with the decision of the government to place someone like Shaktikanta Das at the top seat of the RBI, other sections of the ruling classes, including the big comprador capitalists who have been traditionally ruling India through their clout over consecutive governments since ages, are visibly dissatisfied and want a fair balance. Their dissatisfaction will result in more vocal opposition and vigilance on the activities of the RBI and its controversial governor, Shaktikanta Das, from now onwards.

Though the BJP is thinking that with Shaktikanta Das, it will have a cakewalk in the future, the strong opposition that Shaktikanta Das and the RBI are going to face in the coming days, especially with its decision to allow the banks to ignore their NPAs and continue lending to unscrupulous Indian comprador and crony capitalist friends of the BJP, and its sharing of the surplus reserve fund with the Modi government, will definitely give more jolts and setbacks to the Modi regime. Shaktikanta Das will enjoy enormous power on the Indian monetary policymaking body and India’s cash reserve, however, each step of this power will be laced with thorns of opposition, critical evaluation and unlike the previous scams he was associated with, this time Mr Das won’t have a respite and rescue.