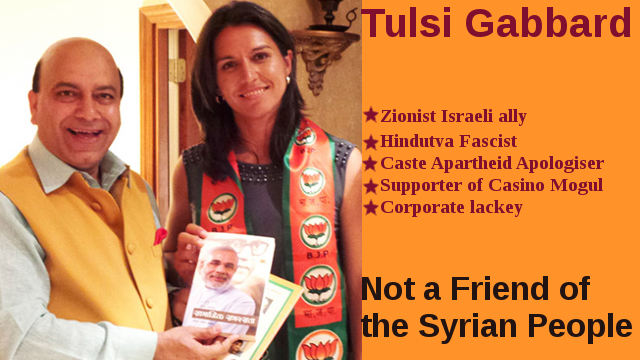 Since the time Rep Tulsi Gabbard returned from a tour of war-torn Syria in January, her revelations regarding the facts about the war have caused a lot of discomfort for the US establishment and the corporate-controlled mainstream media. Though, Rep Gabbard showed the true picture of the war-torn country and correctly accused the west-funded ISIS and “moderate rebels” aka al-Qaida for the deaths and destruction in Syria, her visit to Syria and her meeting with the Syrian President Bashar al-Assad is sign of a nefarious design of the US and its partners like the Zionist Israel and Wahhabi Saudi Arabia.

Being a die-hard fascist, Rep Gabbard will do more harm than benefiting the Syrian people’s cause. Her loyalty and allegiance lie with the US ruling classes and its military-industrial complex, which she is serving since her deployment during the aggression against Iraq. Rep Gabbard is a hardcore fascist, who strongly believes in the fascist doctrine of Hindutva, and she is an apologist supporter of the most inhuman caste apartheid; she played a crucial part in promoting Narendra Modi, the butcher of Gujarat Muslims, throughout the US to pave the latter’s way to the prime minister’s office in 2014.

She strongly campaigned on behalf of Modi to have the US entry ban imposed on him lifted. Ms Gabbard also carried out extensive fundraising campaigns for the Indian fascist Hindutva organisations like the notorious Vishwa Hindu Parishad (VHP) and she is an inspiration for the Hindutva brigade’s forceful conversion drive against the minority Muslims and Christians in India.

Being a staunch propagandist of Hindutva, Rep Gabbard maintains a very cordial relationship with the Zionist Israeli forces within the US and in Palestine. She is closely connected with the Indian right-wing Hindutva regime and is instrumental in strengthening a nefarious nexus between the US government, the Zionist Israeli regime, and the Brahminical fascist Modi regime. She is also closely linked with the Hindutva fascist organisation, Hindu American Foundation, which is closely tied with the RSS, the fountainhead of Hindutva fascist movement.

When Rep Gabbard visited India in 2015, she was treated by the Modi regime as a head-of-state, a treatment that none of the Indian parliament members would get from the US government if they visit the US. She was in India for three weeks and worked closely to build up a Hindutva-Zionist corporate fascist framework that her coterie within the Hindutva fascist RSS wanted the government to follow.

Her plans and discussions bolstered the fascist Modi regime and the RSS affiliates to carry out intense fascist cultural onslaught against the secular and democratic values that the Indian poor held close to their hearts for decades. She also gave a shot-in-the-arm to the Hindutva thugs of VHP and Bajrang Dal to intensify the forceful conversion of poor Muslims and Christians to Hindu religion under the banner of “Ghar Wapsi“.

Rep Gabbard is closely connected with the clique of fascist Zionist war mongers, banking corporations, and oil mafia, who are seeking a stake in the energy resources of the war-torn Syria. She is a close accomplice of Zionist casino magnate, Sheldon G Adelson,  and saved his gambling empire by voting against the online gambling resolution, which helped her win an award from him just before she went for an anti-rich libertarian rally in the West Coast!

She even supported the Zionist Israeli occupiers during their attacks on the innocent people of Palestine in 2014. Rep Gabbard strongly denied that the Zionist Israeli regime’s  attack on the Palestinian people killed civilians and claimed that the “the Government of Israel has taken significant steps to protect civilians in Gaza” and that “Israel’s attacks have focused on terrorist targets” to paint her Zionist masters in the brightest shades.

When Rep Gabbard, who was eager to get a berth in Donald Trump’s administration due to their shared Islamophobic vision, supports the cause of the Syrian people and speaks against the US-funded ISIS, al-Qaida, or other terror groups known in the west as “moderate rebels” then we cannot accept it at the face value. She is a part of the military establishment of the same hawkish and pro-Zionist US administration and she even served the US army during its aggression against Iraq.

As a staunch pro-military and pro-establishment politician of the US, Rep Gabbard is opposing the war against the Syrian government on grounds of Islamophobia and there’s lot more behind her sudden found love for the Syrian people.

After returning from Syria she said: “Our counterproductive regime change war does not serve America’s interest, and it certainly isn’t in the interest of the Syrian people.” When she said counterproductive, she didn’t condemn the aggression launched by the US, rather her signal was that the method isn’t working and it needs some change.

Since the Russian air force began helping the Syrian government to take on the Daesh (ISIS), al-Nusra (al-Qaida), and other “moderate rebels” funded by the US, its NATO partners, and the Zionist Israel-Wahhabi Saudi Arabian nexus, a large section of the US ruling class, especially the big corporations that support Trump, have displayed their displeasure at the mounting cost and low return-on-investment from the regime change war, which the US started to achieve monopoly control over the energy resources and ports of Syria six years ago.

As the major section of the US ruling class saw no future in the Syrian war since the Russian entry changed the scenario and helped the Syrian government to win back much of the lost territories from the terrorist forces funded by the west, they wanted to talk to the Syrian government, the Russian government and the puppet forces of the west, to reach a consensus and get a piece of the pie in a post-war Syria. While the minor section of the US ruling class is still confident about a regime change, for which John Mccain has visited the US soldiers stationed in the Kurd-held areas and also spoke to Erdogan of Turkey at length about helping the western puppets to defeat Syrian forces.

The contradiction between these two camps saw a fierce poll battle, in which Trump, the man who represented the majority of the US corporations and the power bloc of Washington DC, ascended to power, while Hillary Clinton, who was vociferously supported by the powerful US corporations that had been investing money in the US military plans in Syria, lost the election. Rep Gabbard ensured that she show her allegiance to the same corporate lobby that is all set to rule for next four to eight years and her visit to Syria had the mission to show that a part of the US ruling class still cares for the Syrian people and its government.

Tulsi Gabbard tried building rapport with the Syrian government because as a cunning politician and a lobbyist for the cartel of big corporations that recently ascended to power, she knows well that the Russian support in the Syrian war will soon finish off the remnants of the US supported terror group’s citadel and it won’t be wise to leave such a lucrative territory with huge energy resources to the Syrians and Russians alone.

Her approach is not that of a progressive gesture of solidarity shown by an American politician towards the Syrian people fighting against a foreign-supported terrorist uprising in their country, but that of a witty politician who is keen to follow the demands of the time and help her masters to realise their geo-political dreams in a different way

The shrewd politician in Rep Gabbard didn’t utter a word on the underlying reasons for this war to start. Rep Gabbard used the cliché of stopping the war of “regime change” without telling the people that what caused the Obama government to initiate a “regime change” war at the first place.

Rep Gabbard slyly played with the overwhelming anti-war sentiment of the American people and portrayed herself as a staunch opponent of wars, but her hypocrisy could be seen in the pages of history when she staunchly opposed the critics of Zionist Israel’s violent aggression on Palestinian land and kept supporting the BJP government led by Narendra Modi in India, which is launching an all-out war against the indigenous tribal people to evict them from their mineral-rich lands and forests so that those assets could be given to the masters of Rep Gabbard for rapid exploitation of minerals.

Rep Gabbard is another hypocrite American war-monger and Zionist ally, who is trying to portray herself as an “anti-establishment” politician. The mainstream media is cunningly portraying Rep Gabbard as a progressive, anti-war, and friend of Syria politician, just as they portray Mrs Clinton as a left-wing, anti-Zionist, and anti-war politician! Rep Gabbard’s commitment to support the government of Bashar al-Assad is as much strong as Trump’s crusade against capitalism! Or as strong as Obama’s “no US soldiers in Syrian territory” commitment!

It’s time we open our eyes and not let ourselves hoodwinked by the publicity craving politicians like Tulsi Gabbard anymore.