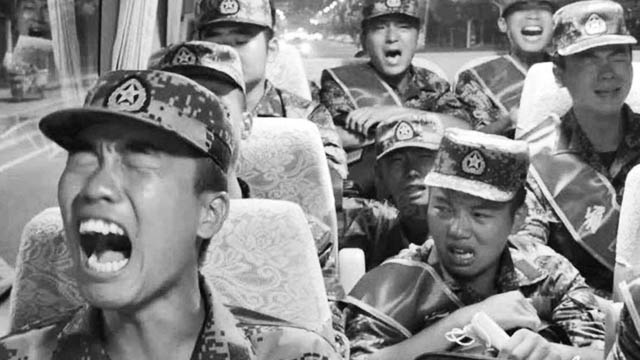 Recently, Indian mainstream media outlets like Zee News and Times Now published a story showing a video of a few soldiers of the Chinese People’s Liberation Army (PLA) crying. Citing a Taiwanese publication, the Zee News and Times Now stories claim that the Chinese PLA soldiers crying in the video are sent to the Ladakh frontier and they are crying because they are afraid of India’s military might.

Though such a narration may titillate the jingoistic viewers of these two notorious television channels that spread Islamophobia and unapologetically vilify the opponents of Prime Minister Narendra Modi and his Bharatiya Janata Party (BJP) on a daily basis, they aren’t just violation of ethical journalistic practices but they also harm India’s reputation in the world.

The 10 Chinese PLA soldiers crying in the video aren’t bursting out in tears while going to the Indian frontier, rather, they are fresh graduate PLA recruits from Fuyang City’s Yingzhou District, and were part of a recruitment drive singing “Green Flowers in the Army” while returning to their barracks. The Chinese language version of Global Times—Huanqiu—called out the lie, first propagated by the CIA-funded Taiwanese regime’s mouthpiece Taiwan News, and later taken up by a Pakistani comedian named Zaid Hamid, who mocked the soldiers and China.

It seems that though Zee News—owned by BJP leader Subhash Chandra—and Times Now have credited Taiwan News for the story, they may have developed the content of Hamid to feed their gullible Indian viewers. The story was peddled on Twitter, a social-media channel strictly controlled by the Chinese state, by some Taiwanese CIA agents posing as Chinese. Times Now wrote:

“In order to validate that the video was legitimate, a Chinese Twitter user by the handle ‘@waynescene’ reposted the video on social media platform and wrote, “They were told that they would be going to the front lines after they got on the bus. The cannon fodder are crying!”(sic)”.

The video was viewed 303,100 times on Twitter after the handle ‘@waynescene’ posted it. But a close analysis of the handle shows that it’s not a handle from mainland China but a Taiwanese one. Picking up a random storyline to create sensational headlines to amplify chauvinistic rhetoric at a time when the Indian economy is in a quagmire of an abysmal crisis shows the priority of these so-called “media” entities.

No wonder, they will never try to publish content calling for long-lasting peace, strong diplomatic ties and better bilateral trade relations between these two neighbours, delinking their relationship from Indo-US relations.

Later, while other BJP-affiliated mainstream media outlets also picked the story to tom-tom India’s military might under Modi, the international media houses, including the Chinese, started exposing the ridiculous attempt to misrepresent facts regarding the 10 Chinese PLA soldiers crying in the video. These boisterous television channels publishing sensational content to derive maximum profit have harmed Indian journalism extremely in the last few decades.

Now, it’s not merely unscrupulous elements of the BJP’s notorious IT Cell sharing bush telegraphs over social media, the Hindutva fascism-incensed big corporate media houses have also intensified their cacophony to appease the emperor Modi and hide any inconvenient facts that may embarrass his regime.

No wonder, parroting the US script, the Indian yellow press vilifies the Chinese to support the obnoxious agenda of Washington DC in South Asia, which includes a long-drawn military conflict with China through its proxies like India, Australia and Japan to drain Beijing’s resources and push it towards a severe economic crisis. Take, for example, this story from The Times of India, where the story of a Chinese capitalist tycoon being jailed for corruption is shown as a punishment for opposing President Xi Jinping.

Such stories like the Chinese PLA soldiers crying in the video are peddled by the Indian mainstream press to captivate the hyper-nationalist Indian upper-caste Hindu elites and middle-class, who form the largest base of its consumers. But at the end of the day, these stories and sensationalising of crucial content prove how the media’s standards have degraded.

When propaganda for a sclerotic regime needs to be amplified, there is no match for the Indian mainstream press. While India’s ranking continues to fall, year-upon-year, in the Reporters Sans Frontiers or RSF’s press freedom index ranking, the yellow press continues with its propaganda, unabashedly. Stories like the Chinese PLA soldiers crying in the video will continue to define why Indian press scores poorly in the world.