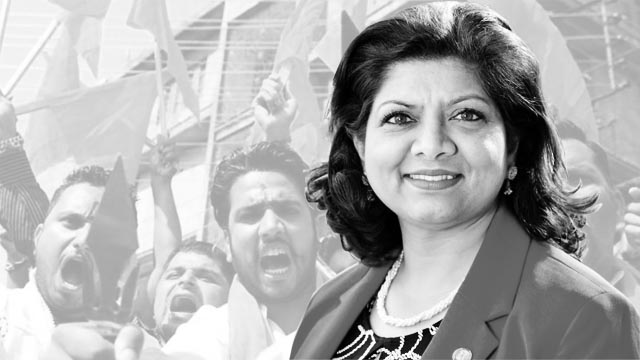 In November 2016, Padma Kuppa reported how she was “left flabbergasted” when, while organizing a seminar about persecution of Hindus in South Asia, “someone recommended that it is important to acknowledge that Muslims in India face similar oppression.”

It was two years before Padma Kuppa was elected to the Michigan State House of Representatives. It was also two years after, in Kuppa’s words, Indians had “voted Narendra Modi into office as the Prime Minister in 2014 with an overwhelming optimism and an overwhelming majority.”

It was also one of the earliest years that targeted anti-minority — especially anti-Muslim — violence by affiliates of Modi’s Hindu nationalist Bharatiya Janata Party (BJP) began to draw broader international attention.

“Since May 2015, a violent vigilante campaign against beef consumption has led to the killing of at least 10 Muslims, including a 12-year-old boy, in seven separate incidents of mob violence,” Human Rights Watch reported in April 2017. “BJP leaders have attempted to portray the majority Hindu population as victims, whipping up fear of Muslim men who they say kidnap, rape, or lure Hindu women into relationships as part of a plot to make India into a Muslim-majority country.”

In its report on 2016, the United States Commission on International Religious Freedom (USCIRF) further explained, “During the past year, there were numerous reports of harassment and violent attacks against Muslims by Hindu nationalists, including local and state BJP members. Members of the Muslim community report that their abusers often accuse them of being terrorists; spying for Pakistan; forcibly kidnapping, converting, and marrying Hindu women; and disrespecting Hinduism by slaughtering cows.”

Nevertheless, as reports of these atrocities emerged from India throughout 2016, Kuppa ended the year by playing a game of whataboutism designed to convey the message: “How dare anyone raise concerns about oppression of Indian Muslims.”

“Compare the civil rights of Hindus in Pakistan with that of Muslims in India,” she wrote. “Indian Hindus in Muslim-majority Kashmir, and in other South Asian nations, particularly Bangladesh and Pakistan, continue to face oppression and violence.” In fact, she argued, Hindus in South Asia face not just oppression but actual “genocide” at the hands of South Asian Muslims.

Thus, Kuppa — a Hindu — declares: “We must be willing to have uncomfortable, but very necessary conversations about violence being perpetrated by Muslims in the name of Islam.”

No doubt such conversations are necessary, but they have occurred for decades, and Muslims — who are the most common victims of Islamist militancy — are the most outspoken opponents of violence perpetrated in the name of Islam.

Yet the leading source of religiously-motivated violence in India today is actually perpetrated in the name of Hinduism. Moreover, as the BJP has risen to dominate the country, Hindu nationalist extremists are increasingly acting with the overt support of the state.

The roots of the violence trace to the Rashtriya Swayamsevak Sangh (RSS), a paramilitary founded in 1925 whose founders compared Indian Muslims to German Jews, described them as a “nuisance,” called them “internal threats,” “traitors,” and members of “foreign races,” and demanded that — unless they “lose their separate existence to merge in the Hindu race” — they should be stripped of citizen’s rights.

Every major anti-Muslim pogrom in India since India’s independence can be traced to the RSS. In 1947, the group assisted the massacre of anywhere from 20,000 to over 200,000 in Jammu; from 1969 to 1989, it was implicated in the massacre of thousands more across India; in 1992, it was briefly banned after involvement in the demolition of a 450-year-old mosque and subsequent massacre of thousands; and in 2002, under the auspices of then Gujarat Chief Minister Modi — a lifelong RSS member — it was involved in a 3-day pogrom that left 2,000 or more dead. A wave of bombings from 2006 to 2008, which left hundreds dead, was linked to a full-time RSS worker who claimed the violence was directly sanctioned by RSS Chief Mohan Bhagwat.

The accusation against Bhagwat emerged in February 2014, but that didn’t stop Kuppa from traveling to Delhi in November 2014 to speak at a Hindu nationalist conference inaugurated by the RSS leader.

Several of Kuppa’s fellow panelists at the event discussed the “genocide of Hindus in Kashmir” — the most common whataboutism raised in response to concerns about the oppression of Muslims in Kashmir.

Kuppa herself, in February 2016, wrote about “the systematic targeting of Pandits” — as Kashmiri Hindus are known — and how they faced “targeted kidnappings, rapes, killings and massacres.” Indeed they did. Beginning in 1990, as militancy gripped Kashmir, the Pandits endured gross atrocities.

Over about 20 years, according to the Kashmiri Pandit Sangharsh Samiti, about 650 were killed.

Dr. Nitasha Kaul (herself a Kashmiri Pandit) describes the whataboutist rhetoric as an issue of “placing the rights of one group of people against another,” declaring, “If you care for Kashmiri Pandits only so far as it silences especially Muslims and enables their continued torture, then that is not care for Kashmiri Pandits, that’s refusal to see the fact that Kashmiris of all kinds are being targeted.” As Kaul notes, at the hands of Indian State forces, up to 70,000 have been killed and 10,000 disappeared — mostly all Muslims. Meanwhile, researchers are currently warning that Muslims in Kashmir — as well as the northeastern Indian state of Assam — face an escalating threat of genocide at the hands of Modi’s regime.

“Because Modi and his new government are focused on India’s economy — reducing poverty, building infrastructure, creating jobs and making it easier to do business in India — the stability of the entire region should improve,” wrote Kuppa in August 2014. “Modi can help India be more peaceful, prosperous, stable, and secular.”

The exact opposite has happened.

Unemployment is skyrocketing, GDP growth has stalled, and inflation has spiked. Internationally, India has come closer than it has in decades to war with both Pakistan and China. Domestically, the country was rocked for months by millions-strong protests — mostly led by Muslims — against the recently enacted Citizenship Amendment Act and proposed National Register of Citizens. The legislation has been compared to a reincarnation of Nazi Germany’s Nuremberg laws.

Overall, India’s current stability can be judged by the fact that BJP leaders linked arms with the police to stage an anti-Muslim pogrom in the country’s capital in February 2020.

“A cross-section of Indians elected the BJP to an overwhelming majority in the legislature, and Modi as a leader of the nation, because they were seeking positive change,” wrote Kuppa in 2014. “The BJP’s platform was not one of Hindu-Muslim rivalry.”

The six years since have proved otherwise.

Just last year, Amit Shah — India’s Home Minister and then BJP president — described undocumented Muslim immigrants as “infiltrators” and “termites” and pledged to throw them into the sea. While campaigning for the BJP, Yogi Adityanath — currently Chief Minister of Uttar Pradesh, India’s most populous state — described Muslims as a “green virus.” Pragya Singh Thakur — named as a co-conspirator in at least some of the mid-2000s terrorist bombings reportedly staged by the RSS — was elected to parliament.

Recommending that the US State Department designate India as a “Country of Particular Concern,” USCIRF has reported a rise in “discriminatory policies, inflammatory rhetoric, and tolerance for violence against minorities at the national, state, and local level” which have “increased the climate of fear among non-Hindu communities.” Mob lynching, particularly of Muslims who are often forced to chant Hindu slogans, have soared throughout the country.

Yet RSS’s Mohan Bhagwat responds: “Lynching itself is a western construct and one shouldn’t use it in the Indian context to defame the country.”

Padma Kuppa took office as a Michigan State Representative in January 2019. Concerns about her candidacy were first raised on 30 October 2018 — a week before the election — by TwoCircles.net, a news outlet providing a “voice for the marginalized sections of India,” which reported: “US political candidate Padma Kuppa endorses Hindutva agenda of supremacy.”

As she sought election in 2018, some of her earliest and largest campaign donations came from out-of-state donors. Out-of-state donations to a campaign for state legislature by a candidate who has never before held office are already unusual. In Kuppa’s case, however, those donations were even stranger as they came from donors who are executives in US affiliates of the RSS — such as Ramesh Bhutada of Texas, the Vice-President of the Hindu Swayamsevak Sangh, which is the international wing of the RSS.

Perhaps that’s a call for voters in Michigan — who rarely have cause to consider Indian politics — to take note of Modi’s rabidly Islamophobic regime.

This article is republished from Medium.com with the due permission of the author.