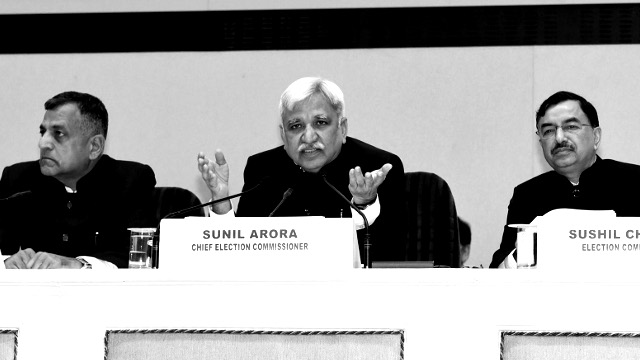 Thanks be to the Election Commission (EC) that it has finally announced the 2019 Lok Sabha election schedule. This announcement of dates and the implementation of the Model Code of Conduct (MCC) finally ended the incessant foundation stone laying ceremonies of Prime Minister Narendra Modi, or shall we conclude that the election dates were announced only after the prime minister finished his “development” propaganda?

It’s an unprecedented thing that the EC has repeatedly ignored the opposition’s complaints regarding the BJP and Modi flouting all electoral norms to push a series of foundation stone-laying ceremonies for proposed projects, whose completion date is more or less tentative. Also, during the last one month, the BJP and the Modi regime have continuously played the “Soldier Card” by using the death of 40 paramilitary soldiers in Jammu & Kashmir’s Pulwama and the much-hyped “Surgical Strike 2.0” targeting an alleged Jaish-e-Mohammad training camp in Pakistan’s Khyber Pakhtunkhwa province, whose evidence the party and the government declined to provide.

Though a four-decade-high unemployment rate, severe farm crisis, falling real wages of the working class and a deteriorating economic scenario have combined together to raise an anti-incumbency wave throughout the country, the BJP and the entire Hindutva fascist camp plunged into the fray armed with jingoism and warmongering to distract the common people, especially the youth. Grasping the opportunity of grief among the middle class over the killing of the paramilitary soldiers, the Modi regime tried to mend its shattered fortune over economic disasters and political failures by hyping jingoism and xenophobia.

Since the BJP suffered an unprecedented setback in the assembly elections held in five states, including three BJP-ruled states where it lost power, there was a big doubt over Modi’s intention regarding the Lok Sabha election. With the heightening of tension between India and Pakistan in the post-Pulwama and the post-Balakote phase, it was doubted that the BJP will not only polarise voters using the “Soldier Card”, it will also delay the polls to reap greater benefits from the death of soldiers and a war-like situation. Though the BJP has amassed a lot of goodwill from the upper-caste Hindu elite and middle class voters during the last one month by using the jingoistic klaxon, it’s unlikely that it will not try to wean away more of them from the opposition camp by spearheading a severe Islamophobic propaganda using its hired thugs before the election.

The EC remained a mute spectator when the BJP was misusing the India-Pakistan dichotomy to build up electoral support for itself. Rather than criticising or stopping the saffron camp from misusing the death of soldiers at the conflict zone, the EC allowed the BJP to continue with the propaganda until 8 March, when it started telling that no one will be allowed to use the soldiers for election propaganda. Also, it didn’t take any action when the BJP leaders started publishing marketing collaterals mentioning the armed forces in them for purely political purpose. Now that the MCC is implemented, it’s to be seen if the EC can even muster the courage to ask the BJP stop peddling lies and exploiting sentiments using soldiers for political publicity.

Sunil Arora, the Chief Election Commissioner, didn’t utter a word on why the assembly elections are not going to be held along with the Lok Sabha election and why Jammu & Kashmir legislative election is not announced. He has no answer on how the EC will stop the vitriol and fake news propagation over social media by the ruling party and the Hindutva fascist camp, whose most member organisations do not represent themselves as political parties per se. Rather, he could only assure and provide false hope about a fair election that will never take place.

This election is going to be a crucial one as the EC’s neutrality and credibility are under question over its conduct in the last few assembly elections and even for its insistence on using the EVMs for voting despite complaints against them. It’s alleged that the Modi regime, upon re-election, will do away with the system of parliamentary democracy and the Constitution’s rule by establishing a tyrannical, Brahminical-hegemonic, Hindutva fascist state officially in India. Therefore, this election may be the last election that India is observing in its post-colonial, seven decades of rendezvous with different forms of tyranny disguised as democracy.