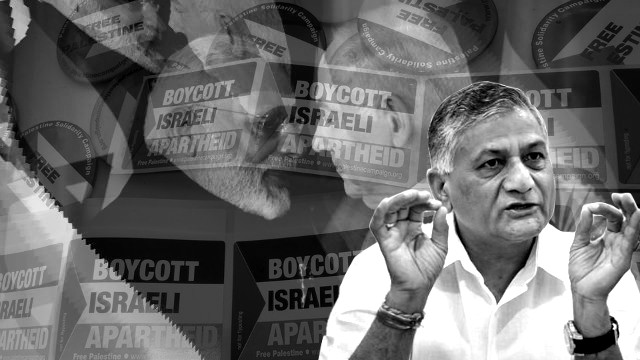 A clear line of demarcation always exists between the military and the political establishment in a democracy. When the military gets a greater say, greater interference and greater control over a democracy, especially when the military is subservient of greater capitalist or feudal interests, then it becomes a nightmare for democracy. With BJP at the helm, the military aristocracy, ie the top-notch officers of the Indian armed forces, currently serving and retired, are getting a greater share of power and control over Indian politics, which is increasingly becoming like a junta-ruled state with a quasi-democratic mask to deceive the masses.

Prime Minister Narendra Modi and other BJP leaders have already made the military establishment a hallmark of patriotism and nationalism, projecting the armed forces as the masters of the country and the people their servants. Now his minister and former general VK Singh, infamous for coining the term “presstitute” by combining press with a prostitute, and for calling Dalits — dogs, has recently expressed his dissatisfaction over the fact that India is still far from becoming like the Zionist terrorist state Israel, just like his ideologue Vinayak Savarkar envisioned. He cited the reason that’s stopping India from becoming a Zionist Israel-type terrorist state — universities like Jawaharlal Nehru University (JNU) and student leaders like Kanhaiya Kumar.

JNU has always been a thorn in the eyes of the Hindutva fascists as the majority of arts and humanities students of the institution refuse to oblige them or subscribe to their ideology unlike the students of technological institutions like the IITs or NITs. The JNU row over the alleged “pro-Pakistan” sloganeering in February 2016 has already portrayed the university as a den of “anti-national” students to the Sangh universe, and to the paranoid upper-caste Hindu elites and urban middle class. Association with the JNU is already viewed with suspicion and new generation student leaders like Kanhaiya Kumar or Umar Khalid are mostly shown as the enemies of a “Hindu Rashtra” by the mainstream media houses that are servile agents of the Modi regime. By calling them a barrier for the RSS‘s plan to convert India into a theocratic Brahminical terrorist and tyrannical state like Zionist Israel gives an insight into the corrupt brains of the Sanghi rabble-rousers like Singh.

It’s institutions “like JNU” and it’s student leaders “like Kanhaiya Kumar” that Singh is calling as barriers rather than only JNU and only Kumar. Between the fine lines, what Singh, the former general who was accused of initiating a military coup against the Congress-led UPA regime, wants to convey in this assertion is that it’s universities where the leftwing student movement is strong and it’s the young left that he and his masters are scared of. It’s the leftwing movement that’s somewhere down-the-line preventing the implementation of the Hindutva fascist project and obstructing the Hindutva fascist camp’s attempt to lure the poor and the exploited Hindus from backward castes or Dalit community by titillating them with Islamophobic ranting. For the Modi regime and the ilk of militarists like Singh, it’s the leftwing youth who are the biggest enemies and need a physical elimination.

But Singh and his ilk won’t tell us why India needs to be like Zionist Israel, which is criticised, boycotted and condemned by the majority of the world for its apartheid policy and its violence against the Palestinian people whose land it’s occupying? They don’t tell us what will India gain by becoming a terrorist and occupation state like Zionist Israel? They won’t also tell us that how replicating the occupation model of the Zionist Israel in Kashmir India has gained any real success? Even after killing more than 100,000 Kashmiris since 1989, what has the Indian ruling classes achieved except criticism, condemnation and hatred from the international community and the Kashmiri people?

India, unlike the Zionist Israel, wasn’t founded by occupying another people’s land forcefully by a people who have no common ground for nationality but a shared religion. The Constitution of India talks about secularism, socialism, equality and of course, democratic discourse. The Zionist Israel calls the land of Palestine the home for Jews living all over the world; Mohammad Ali Jinnah called Pakistan the homeland of the Islamic faithful, but India wasn’t made the homeland of the Hindus living all over the world during its foundation, rather, it promised secularism and assured equal treatment to people of all religions back in 1950. Though Modi and the Hindutva fascist camp have been trying to install a Hindutva fascist state with a Brahminical dictatorship, terrorise and subjugate Muslims by making them second-grade citizens, the unity of the working class and the peasantry, forged and alloyed by the struggles waged by the left and democratic forces from different hues, thwarted the idea repeatedly.

When the Modi regime and its sycophants try to implement citizenship based on religious discrimination to change the demography of India’s northeastern part, then the people rise up against it, as is exemplified in the recent developments in Assam, Meghalaya, Manipur, Arunachal Pradesh, Tripura, etc. When the Modi regime tries to fan hatred against the Kashmiri people and their resilient struggle for independence, then the left and democratic forces burst its propaganda juggernaut to expose the brutal occupation of Kashmir that’s only serving the interests of the Indian ruling classes. When the Modi regime tries to use religion to polarise the masses and divide the country to consolidate corporate loot and plunder, then it’s the left and democratic forces of different lineage and hues that build up massive mass movements of workers and peasants to resist such corporate aggression on the country’s natural resources, labour and land.

As the left, democratic and progressive forces are at the vanguard of India’s anti-fascist struggle against the Modi regime’s agenda of establishing a Brahminical-feudal dictatorship and reverse the gains made by the working class and the peasants through their struggles laced with blood and sweat, therefore, it’s obvious that the ilk of Singh will be angry at them, especially the new generation of leftwing activists and organisers who are awakening the common people against the exploitative system that the Hindutva camp represents and tries to protect. It’s evident that as long as the left, democratic and anti-fascist forces will exist in India, until the time the working class and the peasants will continue to struggle against exploitation, injustice and oppression, the dreams of the Hindutva fascist camp and its militant thugs to turn India into a replica of Zionist Israel and officially establish a Brahminical tyranny will be smashed and crushed.

Singh, his boss — Modi — and other Hindutva hatred peddlers and Zionism worshippers must note this down: India will never become another oppressive and terrorist state like the Zionist Israel. Through incessant struggles waged by the working class, the peasantry, the exploited toiling masses and the oppressed nationalities, it will become a progressive, democratic, secular and socialist country for all people to live in peace, harmony and in a system of socio-economic equality for which thousands of left and democratic revolutionaries have sacrificed their lives. India belongs to its workers, peasants and toiling masses, who are the wealth creators and only their say will matter, irrespective of what Hindutva fascists like Singh, Modi or others want.