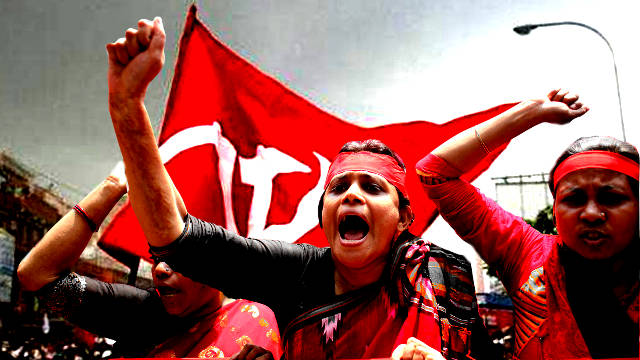 When he is desperately using the Pulwama militant strike and the subsequent so-called “surgical strike” to capitalise upon a jingoistic wave and polarise voters, Prime Minister Narendra Modi is going to experience a major nightmare before the Lok Sabha election in the coming week. Red banners with sickle and hammer, that Modi and his coterie have despised all their lives, will reach the doorsteps of his bastion soon. Thousands of workers, students and youth from all over India will participate in the “Rozgaar Adhikar Rally”, which will be held on 3 March 2019 from Ramlila Ground to Sansad Marg of New Delhi.

This Rozgaar Adhikar Rally will raise the people’s demand for “Bhagat Singh National Employment Guarantee Act” (BSNEGA) — “Right to Employment for All” be included as a fundamental right in the Constitution and fulfilment of the demand of either 365 days of work in a year or an unemployment allowance of ₹10,000 for each person within the workforce.

Along with these, the workers, youth and students will demand the following:

This is a major blow to the Modi regime after the success of the BJP in thwarting a massive peasants’ rally — the Kisan Long March 2.0 — from reaching Mumbai by using deceptive tactics.

As the BJP and the entire Hindutva camp is trying to milk the jingoistic fervour by playing the trump card of war against Pakistan that has captivated the middle class and elite urban Indians, a mega rally of workers, youth and students will reverse its gains and reinvigorate the demand for jobs, education and social welfare.

An ardent corporate-lackey Modi and his coterie came to power promising the corporate houses, both foreign and domestic, an unbridled reign of loot and plunder. During these five years, the only people who benefitted from Modi’s largesse are the big comprador capitalists like the Ambanis, the Adanis, the Aggarwal’s of the Vedanta group, etc. Foreign banks, corporations and speculators profiteered at the cost of the common people’s agony, who only got hollow phrases and promises from Modi and his sycophants over “development”.

Big crony and comprador capitalists like Vijay Mallya and Nirav Modi fled India by duping public sector banks of hundreds of billions, but the government tightened the noose of debt recovery around the poor farmers. Farm debt is steeply rising and blistering epidemically throughout the country while the BJP is busy providing debt relief to big corporations by terming farm debt waiver an economic catastrophe. Though BJP-ruled states like Maharashtra and Uttar Pradesh have used debt waiver as a political gimmick to hoodwink the farmers.

Unemployment shot up to 6.1% in the last five years, industrial growth has shrinked, demonetisation exercise’s shock on the economy is still not over, and the GST shock pushed many small and medium enterprises out of business, benefitting the corporate world immensely.

The economy is at such a stage that the Modi regime is draining money from India’s central bank’s reserve to meet ambitious projects like statue building and its PR exercise. The doldrums of war is now the last resort for Modi and his sycophants, apart from communal polarisation through regular vitriol.

The Rozgaar Adhikar Rally will throw a big challenge to the Modi regime during the election season as it’s carrying such slogans that the working class of the whole country will identify themselves with. Under no condition, the Modi regime can oppose them, though it will malign the participants through backdoor slander policies and try to intimidate them.

As Modi and his sycophants, including the servile and uncritical corporate-controlled media houses, are trying to use the chauvinist propaganda over a war with Pakistan to divert the people’s attention from the issues like growing unemployment rate — four-decade high at present, severe farm crisis that’s leading to large-scale immigration from rural areas and farmer suicides, the intensified economic crisis caused by a sluggish growth rate and fall in real consumer demand, and the gigantic Rafale Jet scam in which Modi’s personal complicity is found, the Rozgaar Adhikar Rally will be challenging the official narrative and jingoistic fervour with questions that are connected with the lives and livelihood of the nation.

The Rozgaar Adhikar Rally will bring participants from all over India and will reiterate the same demands that the people have been raising all these years.

For Modi, to avoid the people’s anger and discontent, it’s imperative to build up a war narrative, a narrative of jingoism and xenophobia that can enable the regime continue its reign over the consciousness of the urban elites and middle class, who form its core vote bank.

The upper-caste Hindu elites and middle class baying for the blood of Pakistan can be satiated with theatrics, amplified agitprop and stories of India’s purported victory over Pakistan. The uncritical class and caste blocs will move with the current and surrender their free will to the whimsical fancies of a megalomaniac dictator like Modi. But the poor won’t follow their footstep.

Those who are without employment, those who feel the pain to arrange two square meals a day for their families, the workers who are losing the  right to unionise or even to be in a stable job, peasants who are forced to commit suicide, those landless peasants who have to migrate to cities in search of manual labour jobs on contract basis to feed their families, those students who face an uncertain future due to cuts in education and skill development, those who suffer due to rising healthcare costs and are thrown into the abyss of poverty due to out-of-the-pocket medical expenses, the domestic workers, the unorganised workers, the retired and senior citizens who are facing immense trouble due to cut in interest rates in small savings and fixed deposits, the retired soldiers who face discrimination in pension, will all come together to join the bandwagon of change despite the poisonous gunpowder smell in the air.

The march of the working class and the youth will tremble the Modi regime and its fascist pillars. The movement for jobs, breads and peace will of course spark a new prairie fire of dissent that will shake the Modi regime and its efforts to survive anti-incumbency using xenophobia, jingoism and communalism. The Rozgaar Adhikar Rally will certainly open a new chapter in India’s fight against Hindutva fascism and neo-liberal economic agenda used by the west to neo-colonise the country through their cohorts like Modi.