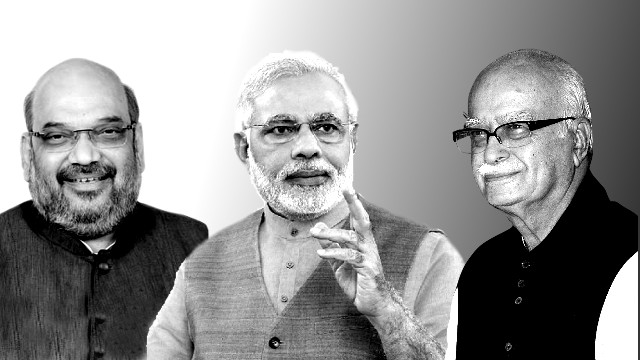 Lal Krishna Advani, the infamous Hindutva hate monger and rabble-rouser responsible for the Babri Masjid demolition and one of the chief architects of the RSS-led Hindutva fascism’s meteoric rise, tried returning to the limelight by ironically criticising the very party he had co-founded 39 years ago for following the very legacy that he and his generations had set. Writing a blog post after a gap of more than 1,800 days, the BJP’s former “iron man” tried to make himself heard at a time when his party, now under the absolute command of Prime Minister Narendra Modi —  a man whom Advani himself mentored and patronised — and party chief Amit Shah, an ardent lackey of Modi, has formally dumped him and called an end to his seven-decade-long political career by refusing him a ticket from Gandhinagar, a place from where he won six consecutive elections since 1990. The 91-year-old relegated as a “Marg Darshak” (guide) by the BJP of Modi and Shah, criticised the party in two paragraphs of his new blog post in an ambiguous matter, sub layering the criticism amid praises.

Defense of democracy and democratic traditions, both within the Party and in the larger national setting,has been the proud hallmark of the BJP. Therefore BJP has always been in the forefront of demanding protection of independence, integrity, fairness and robustness of all our democratic institutions, including the media. Electoral reforms, with special focus on transparency in political and electoral funding, which is so essential for a corruption-free polity, has been another priority for our Party.” (sic)

During the last five years of Modi’s totalitarian rule, India has experienced a precipitous and perilous rise of Hindutva fascism. From labelling those who dissent against the ruling party as “anti-national” and “Urban Naxal” to usurping the control of the lever of all state institutions to turn them into Hindutva fascism’s docile tools, the Modi regime didn’t leave any stone unturned in transforming India into a bulwark of reaction. The society is divided through communal polarisation; people’s choice of food and their customs are used as an opportunity to attack and kill them. Mob lynching of Muslims, jailing of dissenters, rape threats to women who oppose the BJP and the targeted assassination of fierce critics became quintessential of Modi-fied India.

Advani tried to hit the bull’s eye with his satirical remarks on “defence of democracy and democratic traditions”, knowing well that the entire opposition is accusing the Modi regime of destroying the last vestiges of democracy and democratic traditions with brute force and with an intent of establishing the RSS’s vision of Hindu Rashtra by 2022. Shah has already claimed that the BJP is here to rule for another 50 years, revealing its intention to turn India opposition-less by building a “Congress-mukt Bharat” (Congress Party-free country). Unlike his old lackeys like Yashwant Sinha, Shatrughan Sinha, etc, who have left the BJP by criticising Modi and his politics, Advani can’t be a recalcitrant loose cannon politician at the last stage of his life. As one of the co-founders of the party he built, he has to suffer the inevitable consequences of the vitriol he and his comrades like Deen Dayal Upadhyay, Atal Bihari Vajpayee, Murli Manohar Joshi, etc, had sown years ago to make Indian political arena a fiefdom of Hindutva fascism.

Though Advani tried to show his dumping as a self-sacrifice for the nation and the party by using the catchword “Nation first, party next, self last”, the slogan was ironically hijacked by Modi soon after the blog post was published, and he, along with his sycophants, used it as a slogan to showcase the BJP as a party where, unlike the Congress, the individual never comes first. Advani was eulogised by Modi in his ornamental tweet, which sounded more like an adieu note to the man who actually laid the foundation on which the ilk of Modi, Shah and others are building the edifice of a divisive, bigoted and reactionary India.

While many in the right wing, from the Congress chief Rahul Gandhi to Trinamool Congress supremo Mamata Banerjee, from Aam Aadmi Party leader Arvind Kejriwal to the former BJP leaders like Arun Shourie and Yashwant Sinha tried to project the ailing, doddering Advani as a victim of Modi’s purges, they completely ignore or try to forcefully conceal the vicious role played by the grand old man in turning Indian politics into a hotbed of communalism through his notorious Ram Janmabhoomi movement that elevated the BJP from a party with just two MPs in 1984 to a party that formed the first full-term non-Congress government at the centre. Modi’s rise is more or less credited to Advani, who mentored him since the time Modi was another RSS activist and shielded him during and after the 2002 Gujarat pogrom.

When Advani talks about “Nation first, party next, self last”, he displays the RSS’s ideology of obliterating the people, who have no room in the fascist agenda of the “Hindu Rashtra” that the likes of Advani, Modi and Shah call their “nation”. This “nation” is the nation of MS Golwalkar, the notorious ideologue of Hindutva fascism. This “nation” talks about the supremacy of the Brahminical feudal classes, the crony-comprador capitalists, and the foreign monopoly and finance capital on a communally polarised society, where the minorities and marginalised communities will be oppressed and treated as second-class citizens devoid of basic rights.

Today, when the rabid Hindutva rabble-rouser Advani, a sophisticated version of the crass Hindutva fascists like Modi, Yogi Adityanath or Amit Shah, is trying to show his sympathy for the “democracy and democratic traditions”, then one must not allow themselves to be deceived by such hoodwinking philosophical moaning by a man who had been trying hard to establish a one-party rule in India through his unbridled promotion of Hindutva fascism, which Modi, his true disciple, has actually implemented in letter and spirit. Advani’s frustration, as expressed subtly in the blog post, is not over the attack faced by the Indian “democracy and democratic traditions”, rather for the reason that it’s his disciple who is enjoying the fruits of the very poisonous tree that he and Vajpayee planted years ago.

For the good of the nation, for the victory of democracy and for the destruction of Hindutva fascism it’s imperative that the ilk of Advani and his disciples like Modi, Shah, etc, are thrown to the trash bin of history by the great people of India, who have always fought against injustice, divisive politics, and colonial oppression. Only with the rise of a truly anti-fascist, progressive and people’s democratic political force, the overthrowing of the parasitic and utmost virulent Hindutva fascism and its brand icons can be possible. To make that happen, those forces which are serious about fighting and defeating the menace must intensify their struggle and pulverise the bastion of Hindutva fascism that once Advani helped to build.