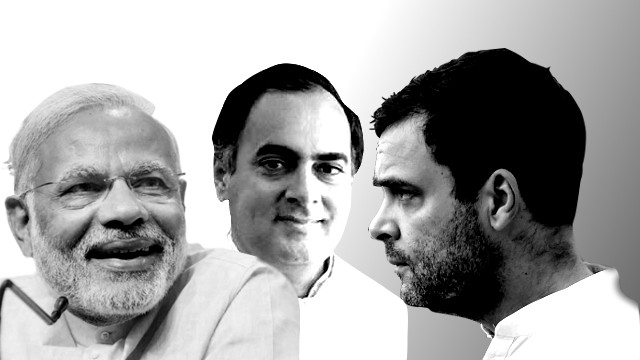 Though Rajiv Gandhi was an accused in the Bofors scam, that rocked the Indian political scenario in the late 1980s, throwing the Congress party out of power in 1989, in 2004 the Delhi High Court posthumously acquitted him of all corruption charges and the NDA government of that time, headed by Atal Bihari Vajpayee of the BJP, decided to not pursue the case in the Supreme Court. The BJP under Modi is clearly trying to suppress these facts and turning the electoral discourse into personal slanders, character assassination and high voltage on-stage drama to touch the emotional tug of Hindu voters. Soon after Modi faced a barrage of attack for his despicable comments on a dead prime minister, and soon after the Rahul Gandhi tweeted sarcastically mentioning about “karma”, a host of BJP leaders, from Prakash Javdekar to Arun Jaitley, joined the bandwagon to defend the prime minister using mere rhetorics against Congress’s dynastic politics.

It’s indeed true that Bofors scam took place under Rajiv Gandhi’s rule and despite the Delhi High Court acquitting him, he can’t remain out of suspicion due to his position in the government and the party during the 1980s. Late Mr Gandhi was also instrumental in signing the GATT pact with what’s now known as the World Trade Organization (WTO) and taking the route of the neo-liberal economy soon after the Soviet Union’s economy started stagnating. These steps paved the way to India’s present economic disaster and its widening wealth gap between 1% rich who owns 73% of the wealth and the rest 99% struggling over the leftover 27% wealth. He played a crucial role, along with Late Arjun Singh, to allow Warren Anderson, the former CEO and Chairman of Union Carbide company in Bhopal, Madhya Pradesh, to flee from India soon after the tragic gas leak incident.

Moreover, late Gandhi also had been a communal and divisive character, an erudite version of Mr Modi himself. He allowed the Sikh genocide to take place to polarise the voters after his mother former prime minister Indira Gandhi was gunned down by her Sikh bodyguards, who wanted avenge her brutal military action in the Golden Temple. More than 3,000 Sikhs were killed in Delhi alone, and thousands all over India, while late Gandhi kept murmuring about the after-effects of a big tree falling on the ground, just alike Modi uttering Newton’s Third Law of Motion to justify the Gujarat Muslim genocide under his watch in 2002.

Late Gandhi had also opened the doors of the Babri Masjid to fuel the Ram Temple movement of the BJP and paved way for the party of two MPs in 1984 to become a formidable and omnipotent force by 2014. His blatant submission to Islamic fundamentalists following the Shah Bano verdict by the Supreme Court exhibited his utmost opportunist character and also the fact that the Congress never had any penchant for secularism throughout its existence. History will not absolve late Gandhi of the crimes he had committed during his lifetime, just like his mother.

However, Rajiv Gandhi’s crimes and corruption can’t normalise personal assault against his son more than three decades later. It’s definitely a very disgusting example set by Modi and his coterie by resorting to personal attacks against the Congress party chief’s family to counter the allegations levelled at the current dispensation. Modi should try to answer for himself and not seek refuge in Jawaharlal Nehru or late Mrs Gandhi to save his skin. If Bofors had happened during the tenure of Rajiv Gandhi, then he suffered the consequences during the 1989 elections. Accusing him, or attacking him after his death to merely save one’s own skin that’s facing the acid test of Rafale Jet scam and other such acts of corporate appeasement, will go down the annals of history as a sheer act of frustration by a loser and insecure politician craving to seize power and consolidate it forever.

It’s unlikely that Modi or the present BJP leaders will learn and follow the democratic ethos in their discourse due to the severe influence of the RSS’s Hindutva fascist ideology on their lives. They have mortgaged their common sense, basic human qualities and even professional etiquettes, which the Indian politicians are generally deprived of due to their subscription to feudalism and autocracy, as drunk with power the entire gamut of Hindutva fascists are now audacious to mock and deride those who are not alive to defend themselves. The sulking of Modi at the Congress could’ve been justified if the party was in power and he is in the opposition bench, however, as his government and party are trying to turn the country into an opposition-less place, alike late Mrs Gandhi, his anti-Congress tirade is merely an expression of utmost frustration out of one’s inability in doing their job properly. Modi’s personal attacks against Rahul Gandhi, despite having some foundational values, will go down the annals of history as the most filthy version of Indian political discourse.