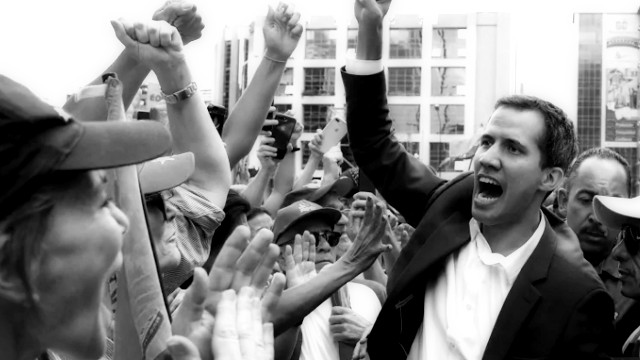 Venezuelan crisis reached a higher peak last Tuesday when Juan Guaidó, the CIA-funded puppet of World Bank, IMF and WTO, tried to usurp power by starting a coup, which was suppressed by the Venezuelan Army and the Nicolás Maduro-led government. Following diktats from Donald Trump’s fascist regime, especially from Mike Pompeo, Guaidó took the drastic step of military confrontation on Tuesday after his repeated failures since months in toppling the Maduro-led genuine government has irked his American masters. Though Maduro-led government defeated Guaidó, they didn’t arrest him to ensure that the situation doesn’t aggravate as the government has kept the door of negotiation open.

Despite having the wholehearted support from Washington DC and most of the Latin American countries with Pentagon’s puppet regimes ruling them, Guaidó couldn’t make any progress since the time Trump anointed him as the ruler of Venezuela. Even though he tried hard to lure the supporters of President Maduro in the armed forces to his side and trigger a large-scale defection by spending millions of dollars that he has received from the CIA, Guaidó couldn’t make much difference in the scenario. The Venezuelan Army showed its loyalty towards the government and so did its people.

This setback to Guaidó is making many to write an obituary to his political future and accolading the Maduro-led government as victorious. Though Maduro and his government have been able to thwart the peril of an imperialist aggression for the moment, it’s too early to conclude that Venezuela is in a safe zone, as the country has never been in the safe zone since 1998, when late Hugo Chávez formed a nationalist government opposed to American hegemony in the country. It will be unwise to think that Guaidó and his American masters will sit quietly after this setback. According to RT, Guaidó has already realised that he lacks in troop strength and despite managing a few defections, the whole army is still standing firmly with Maduro. Now, Guaidó is attempting to ensure that he gets direct support from the US military and can then topple the Maduro regime with the help of foreign mercenaries.

After the death of Chávez in 2013, the US and its imperialist allies anticipated a quick collapse of the Venezuelan government under a former worker — Maduro — as he lacked the charisma that was quintessential of Chávez. Yet, ever since 2013 Maduro kept proving the US wrong and despite a severe economic crisis caused by the blockade on Venezuela by the US imperialism and its Latin American allies, he completely managed the situation and daringly faced the bloodthirsty Trump regime.

For Trump, the need for Venezuelan oil resources is quite imminent and neither he nor the Wall Street-based big corporations can delay anymore on seizing the energy resources of Venezuela. Guaidó, who was an unknown politician and was infamous for instigating riots against the government in lieu of money from the CIA, became a darling of the US only because the US needs a mask to cover its heinous imperialist occupation of Venezuela. This has fuelled the rise of Guaidó and has made him demand a total American military intervention in sovereign Venezuela so that he can ride the barrel of American guns to power.

In the last five months, Guaidó has been trying hard to persuade the military to support him in toppling Maduro’s government and to execute the top-ring of Chávez followers, including Maduro. When the US and its imperialist lackeys declared their recognition of Guaidó as the head of the Venezuelan state and imposed him as the ruler against the choice of Venezuelan people, the real mask of Guaidó was off. Though a lot of common people have supported the opposition due to the severe economic crisis, yet the capitulation of Guaidó to the US and his promise to sell-off the nation to the Wall Street rang an eerie and vexing alarm in Venezuela.

The common people, except the middle class and elites who despise the socialistic economic model, understood that under Guaidó they will become slaves of the US imperialism and its mercenaries, that they will gradually lose all their hard-won rights like their Brazilian, Ecuadorian and other counterparts. The people have seen the real face of Trump and Pompeo earlier, they also saw Guaidó’s agenda of privatising the national resources and running a reign of liberalisation of the economy to help the elites and the middle class appropriate the trickled down benefits from the American and western oil corporations. They now know that under Guaidó, they will be only left with tax bills and zero political-economic rights.

Since January, the US has been preparing a military intervention plan, including a replica of the 1973 Chile model. Guaidó is trying to bring in as much American arms and ammunition to arm his thugs; the US Marines are already in Latin America waiting for a green signal from Pentagon. Yet, the US is still not confident due to the recent cementing of ties between Russia, China and Venezuela. The formers promised to help the latter, with Russia even pledging its military support to Caracas like Moscow’s assistance to the Syrian government to weed out the ISIS and other terrorist organisations funded by the US and NATO. Washington has an uneasiness over creating a Syria-like situation down south as it fears the repercussion reaching its home quite fast. This is a reason that it’s gradually delaying the imminent US aggression on Venezuela and Trump is trying to persuade Russian President Vladimir Putin to keep Kremlin away from Latin America.

The Venezuelan Foreign Minister Jorge Arreaza is meeting the Russian Foreign Minister Sergei Lavrov in Moscow on 5 May, a day before Lavrov meets the US Secretary of State Mike Pompeo in Finland. Pompeo has been vouching for a military solution for far too long, while Lavrov and Kremlin have been demanding a peaceful negotiation and power-sharing between Maduro and Guaidó to bring the impasse to an end. The US and Guaidó have opposed any peace deal or negotiation and they are adamant in using force and muscle-flexing to topple Maduro’s government.

In the next few weeks, or for that matter in few days, the political crisis will further ripen as Guaidó, in his attempt to wean soldiers from the government’s camp, will spend more money and will even raise his own troops, armed with the US weapons, to start a large-scale civil war. It will be the repeat telecast of the Syrian template used by the jihadis sponsored by the US. This will eventually result in mayhem, as the imperialist aggression and foreign terrorists will sink Venezuela in a pool of blood. Maybe Maduro and his government will still manage to thwart the aggression by the US in the near future, however, the gruesome violence and bloodshed that the country will have to go through will create a new chapter for Venezuela, and unsurprisingly all these will take place for the sake of Venezuelan oil, which the US wants under its control through any means.