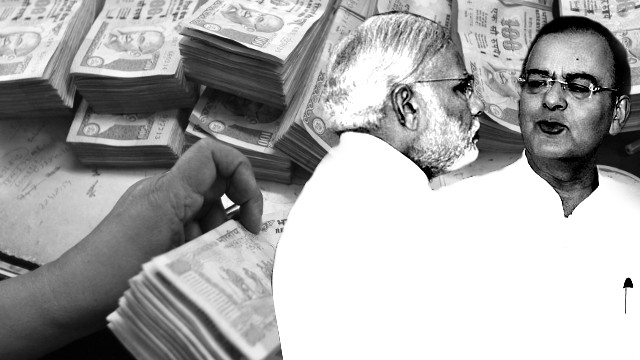 As the Lok Sabha election reached its last stage, the vitriol spread by Prime Minister Narendra Modi and his colleagues reached the peak. Apart from bashing the Nehru-Gandhi dynasty and asking votes by criticising his predecessors like Rajiv Gandhi, Modi has brought the elections and the standard of parliamentary politics to a historic low. However, throughout his election campaigning, Modi and his coterie didn’t talk about demonetisation, which was supposed to be a “historic” step towards curbing the menace of black money. This conspicuous silence, this deliberate avoidance, and the attempt to conceal a disaster that threw the Indian economy and its unorganised sector, more than 75% of people into tatters, is showing Modi’s utmost fear of having the demonetisation failure return to haunt him like a nightmare.

On the evening of 8 November 2016, Modi announced that the Rs 500 and Rs 1,000 notes in circulation then, which formed a considerable part of the total cash in circulation, will be demonetised. Modi proposed the introduction of a new Rs 2,000 note and promised the nation that with the demonetisation exercise, the menace of black money will be curbed. He said that the rich will be punished for their ill-gotten wealth and the poor will be receiving economic justice. His government sent a severe shock to the entire economy, causing thousands of small and medium enterprises to suffer, while the giant corporations adapted themselves quite quickly with the situation. While a section of the upper-caste urban elites and mobile middle class easily adapted with the scenario using the privilege of digital economy and gadgets, the large section of poor and downtrodden masses, the working class, the unorganised workers, the farmers, the toiling people, mostly from the Dalit, backward caste, tribal or religious minority groups like Muslims and Christians, suffered immensely due to the crisis unfolded by the demonetisation exercise.

Prime Minister Modi thumped his chest, he shed tears and claimed that the people can burn him alive if black money isn’t destroyed within 50 days from the fateful evening of 8 November 2016. The prime minister’s claims regarding destruction of black money, reducing cash transactions for a regularised economy and increasing the tax net fell on their face when it was found that more than 99% of the cash that was in circulation before 8 November 2016 returned back to the banking system, when it was also found that the cash circulation in the economy has returned to the pre-demonetisation stage and cash is still the most preferred mode of transaction for two thirds of the population. The rich and super-rich continue to flourish, the much acclaimed financial “surgical strike” hurt the rich so much that 1% of Indian rich, who are liberally donating to Modi’s coffer, own 73% of the country’s wealth. Even when the country’s economy is at the worst stage, plummeting mercilessly, they are living a lavish and luxurious life.

Naxalite attacks against the paramilitary forces, sent to evict tribal people from their land and forests to handover the mineral-rich areas to big mining corporations, continue unhindered; contrary to the claim of Modi that the Naxal issue will be addressed forever through demonetisation, the Naxalites gained more ground post-demonetisation in new areas of Chattisgarh, Maharashtra, etc. Modi’s claim that stone pelting in Kashmir will come to a halt due to cash crunch, boomeranged against him with a new-found rage against the Indian occupation exhibited by the Kashmiri youth who resort to stone pelting each summer religiously. Militant attacks, like the one that killed 42 paramilitary personnel in Kashmir’s Pulwama, continue unbridled even in 2019, though Modi said that the end of the cash flow will annihilate terrorism forever.

Even after such a long list of failures, spectacular failures of gargantuan nature, both Modi and his ardent disciples — the upper-caste Hindu elites and urban middle class — continue to hail the demonetisation exercise as a masterstroke without explicitly stating how it was a masterstroke when none of its objectives was fulfilled.

Thousands of small and medium enterprises, which operated on the basis of cash, suffered a severe setback due to the demonetisation drive. Many of them closed their shops after they couldn’t pay for raw materials, rent, wages and other expenses. Millions of unorganised workers lost their jobs and large-scale reverse migration to rural areas was fuelled, as the poor couldn’t survive in the cities being penniless and jobless. Even the extreme unemployment that prevails in India at present, at a 45-year-high rate, has its roots in the demonetisation exercise as it triggered the first massive unemployment by shocking the unorganised sectors of the economy.

The growth rate of Indian economy fell at its lowest post demonetisation, yet Modi packaged it with a “nationalist” label to hoodwink the Hindu voters during the Uttar Pradesh and other assembly elections in 2017. However, since the assembly elections in Gujarat, which took place at the end of 2017, Modi went silent on the question of demonetisation and the BJP slowly stopped talking about its achievement. Even before the Gujarat assembly election, Modi and his coterie have repeatedly shifted the goalpost of the demonetisation drive from killing black money through a “surgical strike” to digitalising the Indian economic transactions to achieve better tax compliance to migration towards a regularised economy.

This inconsistency exhibited by the BJP over its claim regarding what the demonetisation exercise achieved shows that the entire exercise was implemented with no particular goal but to meet the demands of any external party. We have discussed in this article how demonetisation exercise was done according to the diktat of the US government’s USAID organisation, which is helping the major payment gateways and banks to profiteer in the developing economies by popularising digital payments/plastic money by forcefully drawing cash away. It was under the public pressure, fearing a reprisal, that the Modi regime didn’t pursue the course for a longer period, as it would’ve brought a far bigger disaster for Indian people.

Contrary to the much publicised “surprise factor” that was associated with the demonetisation exercise, it was found that the big corporate sharks, the stock market brokers, big Hawala operators, money launderers and mafia were already aware of the demonetisation exercise as early as in April 2016. In this article, it’s discussed why the demonetisation exercise lacks any real surprise for its designated target group. This availability of information, along with the availability of huge cash in new currency notes with the BJP, proved that there was no pre-set agenda of attacking black money, which is rare in the form of liquid cash hoarded at people’s house like Bollywood thrillers, rather, the entire exercise was to satiate Modi’s foreign bosses, who have been trying to revive the financial fortune of big banks and payment gateways.

Modi’s claim about ending corruption also doesn’t hold any ground following the launch of the most notorious electoral bonds, where corporate houses can anonymously donate a huge amount of money to any political party without even showing it in their returns. This leeway of anonymous funding, of which lately the BJP is the biggest beneficiary, allowed the corporate houses to influence the political decisions of the parliamentary parties more directly than ever, and, like the mainstream servile media, the parliamentary political parties have officially become lapdogs of the big corporate capital. Apart from this, many BJP leaders didn’t shy from displaying their ill-gotten wealth during the demonetisation exercise to mock the common people who were dying in the queues to change their old currency notes; from Nitin Gadkari to the notorious Bellary mining mafia Reddy brothers spent billions to organise lavish wedding of their wards, yet, the common people were only allowed a rationed amount of cash withdrawal for weddings.

The failure to achieve any of the stated goals, the disaster it brought to the Indian economy and the households of the poor started manifesting strongly since the summer of 2017. Though the experiment gave enough ammo in the form of data to the USAID and its big corporate affiliates, allowed the surge of payment banks using the Aadhar details of the public, which still remain aloof from banking regulations while storing and circulating money without paying any interest on the deposits, it only brought unemployment, economic crisis and chaos for the working class, the farmers, the rural poor and the general downtrodden people.

Today, Modi is scared to utter “demonetisation” fearing reprisal from the rural voters. He knows well that the common people will punish him if they remember the ordeal brought by the demonetisation exercise, which may affect the poll scores in the urban areas. Hence, along with his leitmotif “Gujarat Model” that he used to sell a dream of a developed India to the voters, the demonetisation is also scrapped by him and his party. If the topic of demonetisation, along with unemployment, GST, etc, are raised by the opposition, then the BJP and Modi either try to play the communal card or they take the route of the theatrics of “nationalism” to distract the public.

Demonetisation is a Frankenstein created by Modi and his coterie; it’s too hard for them to claim victory for the doomed campaign now, or to deny having any links with it. It’s a stark reminder about how one can commit a major economic crime and can still remain scot-free by merely misusing power and by hoodwinking the common people with communal bush telegraphs. The Modi era is signified by its total reliance on falsehood, lies and in its habit of distracting the people from the severe economic and political crisis to ensure the invincibility tag around Modi remains intact.