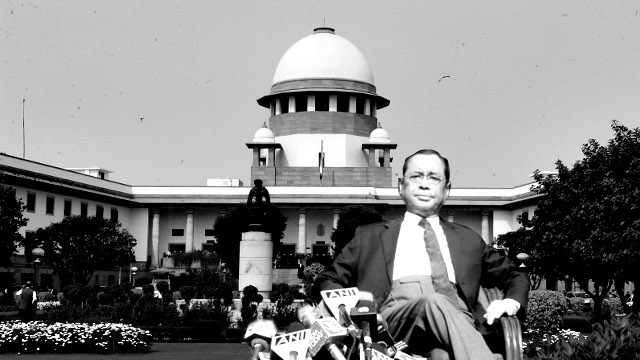 The camouflage of neutrality and impartiality donned by the Indian judiciary again showed its fissures when a highly-controversial sexual harassment allegation levelled against the Chief Justice of India (CJI) Ranjan Gogoi was dismissed by a three-member committee formed and the complainant and the general public were denied a copy of the report under mysterious circumstances. Though Section 13 of Sexual Harassment of Women at the Workplace (Prevention, Prohibition and Redressal) Act, 2013, makes it mandatory for the complainant to receive a copy of the report from the internal investigation committee, the complainant alleged that the norms weren’t followed in this case.

CJI Gogoi had earlier lambasted the accusation and the complainant when the news was published in the media. He blamed the “rich and the powerful” of playing with the Supreme Court’s authority. By amplifying his victimhood cacophony, CJI Gogoi raised severe doubt about the transparency and neutrality of the committee formed to inquire the case. The woman, who was a junior court staff earlier, walked out of the inquiry committee on 30 April after the third in-chamber sitting. She voiced concern about the way the inquiry was conducted and raised serious doubts about the committee’s findings.

Women rights organisations and democratic lawyers reached the Supreme Court premises on Tuesday, 7 May, to protest against the arbitrary and opaque inquiry conducted by the investigation committee. Around 55 protesters, along with journalists who were recording the event, were rounded up by the Delhi Police and taken to the Mandir Marg Police Station. While the journalists were released, without going through the “verification process” that the police officers told them that they will be subjected to in the police station, cases were lodged against the protesters.

As the chair of the CJI, alike the President of India, enjoys immunity from prosecution while in office, there’s no scope for the complainant to file a case against him or challenge the findings of the investigation committee because the apex court’s decision can’t be challenged anywhere else. Under such a complex judicial procedure and system, there can be no respite for people who would dare to raise their fingers at the judges of the Supreme Court. Apart from being hounded legally, they will be also shamed in public, where the judiciary, which should ideally be a servile agent of the supreme people, is positioned as a demi-god seeking servility of the public.

It’s an irony that CJI Gogoi’s name is involved in such a judicial controversy that India has seen as he was one of the four judges who held the unprecedented press conference in the history of the apex court against its former CJI Dipak Misra in January 2018. He, along with his “brother judges” called the former CJI’s actions harmful for the judiciary’s reputation. The country and its marginalised people looked up at Justice Gogoi, along with justices J Chelameswar, M B Lokur and Kurian Joseph, with extreme hope. Though former justice Chelameswar retired earlier, the onus to carry the legacy fell on Justice Gogoi, when he was appointed as the CJI. However, since assuming the position, CJI Gogoi has undertaken a complete U-turn from his earlier stated positions. The reflection of former CJI Misra is quite visible in the actions of CJI Gogoi.

If the Supreme Court’s internal investigation committee on sexual harassment can’t deliver justice or make a woman complainant’s voice heard loud and clear, if the threat of dire consequences issued by the CJI, in a cryptic tone, to those who question his integrity isn’t countered with democratic tonality, if a complainant is not given proper space and rights as asked by the law by the very institution entrusted with the custody of law and Constitution’s rule, then it’s quite easy to understand how thousands of women employees throughout the country will be treated when they complain against their superiors or the chief patrons of their organisation of sexual harassment. This act of victim blaming, or even doubting the allegation’s credibility even before starting an investigation shows how much prejudice and adversities those seeking justice under the Vishakha Guidelines face. If the Supreme Court starts its inquiry process doubting the complainant’s version merely because of the position of the accused and the intricacies involved in an impeachment process, then which institution should the common women look up to for justice?

It’s for the due process of law and inquiry to find out whether a complaint, such as the one filed by the woman who accused CJI Gogoi of sexual harassment, has any substantial content or is a hollow accusation levelled with an ulterior motive. A complaint against someone won’t make them a culprit, also filing a complaint against someone will not make one victim. It’s only after the due investigation that one can reach a conclusion. However, the way the Supreme Court’s inquiry committee, chaired by senior judges, including two women judges, dealt with the complaint of sexual harassment against the CJI and the way the complaint was disposed off, without taking the complainant into confidence or providing any insight to the common people, who, by the virtue of their power, own the Supreme Court and the Republic itself, raises a lot of questions about the process itself.

A woman in a patriarchal society must be heard, her rights must be established and her grievances must be dealt with utmost priority because despite her socio-economic condition, genderwise she is still in the persecuted section of the society. By denying adequate space to the woman complainant and through a plethora of character assassination attempts to malign her, the institution of justice itself meted out injustice to her and allowed her an opportunity to voice her dissent by raising doubts over the inquiry committee’s findings.

Though the complaint was made against CJI Gogoi, still, for the sake of the judiciary’s so-called neutrality and independence, the Supreme Court’s inquiry committee should have set a different example this time. Unfortunately, the facade of neutrality wasn’t torn off by the outsiders, rather it’s the judiciary’s own who helped it fall flat on the surface. A victory through a transparent process and hearing would’ve been really comfortable for CJI Gogoi and the institution of justice itself.