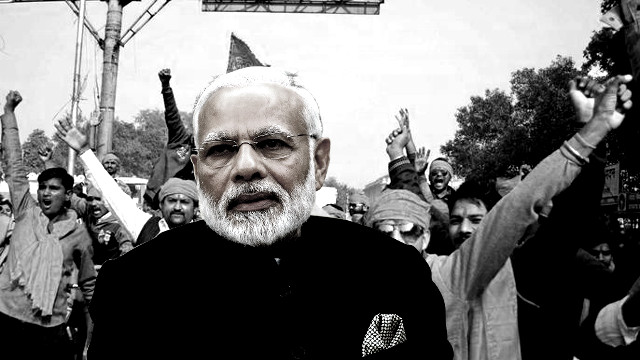 Prime Minister Narendra Modi’s government and his Bharatiya Janata Party (BJP) have been expressing its disapproval of the recently-released report by the US government that criticises India for religious intolerance and persecution of minorities in 2018. The International Religious Freedom Report by the US State Department lists the state of religious freedom in different countries. The report alleged that the officials of the ruling BJP have been promoting bigotry and intolerance. It also listed the incidents of mob violence against Muslims by the Hindutva fascist fanatics, commanded by the BJP’s ideological mentor, the Rashtriya Swayamsevak Sangh (RSS), over the allegation of “beef” consumption, trading or cow slaughter. Ironically, the report was released by the US Secretary of State Mike Pompeo who is scheduled to arrive in India on 25 June as an emissary of US President Donald Trump.

Raveesh Kumar, the foreign ministry’s spokesperson, took a potshot at the US over the report, saying: “India is proud of its secular credentials, its status as the largest democracy and a pluralistic society with a longstanding commitment to tolerance and inclusion. The Indian Constitution guarantees fundamental rights to all its citizens, including its minority communities,” (sic).

“It is widely acknowledged that India is a vibrant democracy where the Constitution provides protection of religious freedom, and where democratic governance and rule of law further promote and protect the fundamental rights,” he added.

The BJP’s media chief and MP Anil Baluni issued a statement to criticise the US government’s stand, accusing it of being jealous of Modi’s popularity. “The basic presumption in this report that there is some grand design behind anti-minority violence is simply false. On the contrary, in most of such cases, these instances are carried out as a result of local disputes and by (people with) criminal mindset,” Baluni said.

While saying this, Baluni didn’t clarify why his party’s men, including some infamous ministers, are found backing the perpetrators of such heinous crimes, and also, in the case of Jayanta Sinha, are found garlanding the accused of mob lynching. He didn’t clarify why his party’s leaders and former ministers in Jammu & Kashmir would rally in support of child rapists. He didn’t tell the media, why, even as per the Modi regime’s estimation, incidents of communal violence jumped many times during the reign of Modi.

Though this report by the US’s State Department has no significance in terms of enforcement, especially as India is a market-friendly economy and Pompeo is reaching out to the Modi regime in Trump’s attempt to turn India into an exclusive neo-colonial stronghold in South Asia and use it to reinforce American hegemony over the Indian Ocean, the vociferous opposition to it by the BJP and the government exhibits the panic that’s triggered within the administration as the cat is out of the bag. The Indian government is called out as what it’s in the global arena, a communal and bigoted regime with zero concern for human rights and minority communities.

Ironically, when the BJP was vehemently denying that the minorities are persecuted in India for their identity, when Kumar was rubbishing the US State Department’s allegations, at the same time a Muslim youth named Tabrez Ansari (24) succumbed to the injuries he received when a mob thrashed him brutally and forced him to chant hardcore Hindutva slogans like “Jai Shri Ram” (hail the deity Ram) and “Jai Hanuman” (hail the deity Hanuman) after they came to know that he is a Muslim. The incident took place in Jharkhand’s Seraikela Kharsawan district on 18 June, while Ansari died in judicial custody four days later. He was accused of theft and the police are accused of neglecting his wounds due to his Muslim identity.

While Ansari died, another Muslim man, Mohammad Momin from Delhi, was hit by a car in Rohini area of the city, when he refused to chant Hindutva slogans as ordered by a group of Hindutva fascists travelling in a car. They intercepted Momin due to his attire and threatened him with dire consequences. When Momin was going away, the Hindutva fascists hit him with their car in an attempt to kill him. Yet, Momin survived, but he is living under constant fear, like many of the 200 million Muslims living under the sword of Damocles every day in what’s called Modi-fied India.

The anti-Muslim mob violence happening throughout the country on an industrial scale isn’t spontaneous; it’s not an instinctive response by a frenzied mob during tensed moments, rather, it’s a calculated, a well-planned and a well-administered programme adopted by the RSS-led Sangh conglomerate. Though the Muslims are the biggest receivers of this organised violence, marginalised communities like the Christians, the animist tribals, the ostracised Dalits are just a few steps behind the Muslims in terms of victimhood.

Powered by a brute majority in the parliament and total control over the majority of states, the BJP and the RSS want to reassert the domination of the Brahminical upper-caste Hindus. The Hindutva fascist camp has got the opportunity to change the Constitution and turn India into a reactionary theological dictatorship like Wahhabi Saudi Arabia or the Zionist Israel. It wants to drive mob frenzy by appealing to the bloodlust of the upper-caste Hindus by provoking them against their biggest perceived enemy — the Muslims — followed by other marginalised communities.

No international reports, criticisms, or condemnation can stop the BJP and the RSS from using the communal savagery against the Muslims, Christians, tribal people and Dalits. The BJP won the 2019 Lok Sabha election riding on the dual power of rigging and communal polarisation through intense vitriolic propaganda in which the BJP president, the prime minister and all members of the Sangh conglomerate were involved. For no reason would the BJP leave its communal outlook or mend its ways.

The only way this communal juggernaut of the utmost reactionary RSS-led Hindutva fascist camp can be prevented is by politically educating the basic and broad masses of workers, peasants and oppressed people, uniting them under a common banner and by empowering them to lead a struggle for people’s democracy, secularism, liberty and socialism. Only their intense struggle, only their participation and leadership can thwart the communal bandwagon of the BJP and the RSS, driven by Modi and his coterie, and it can destroy the menace of Hindutva fascism and bigotry from India forever by uprooting its principal cause — the existence of a semi-colonial and semi-feudal socio-economic structure — which has imprisoned the consciousness of the people behind the high walls of reactionary Brahminical rule. The Modi regime will not be punished by the US imperialism, because it’s harnessed and nurtured by it, rather, it will be punished, along with the entire Hindutva camp, by the poor and downtrodden people whom this regime wants to sink in bloodbath and fratricide.