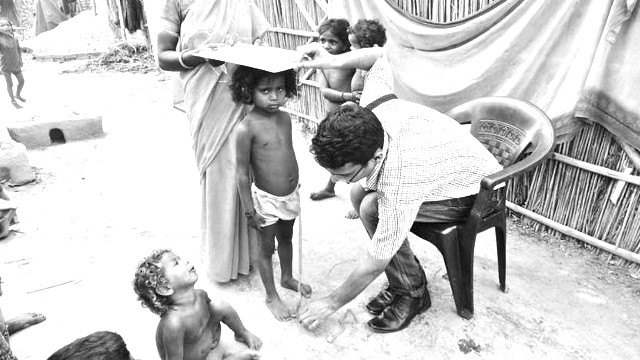 More than 130 children may have died in Bihar’s Muzzafarpur, the heartland of litchi cultivation, due to Acute Encephalitis Syndrome (AES), since the end of May 2019. Known as “Chamki bukhar” in the local parlance, the AES is an epidemic, which is known as a lethal disease in the region and has been killing children since the mid-1990s. The utter negligence shown by the state government towards the plight of the people is visible from the amount of time it took to even acknowledge the problem. The ruling Janata Dal (United) (JDU) and Bharatiya Janata Party (BJP) coalition refused to accept that the AES is an epidemic at the beginning of the outbreak and showed hypoglycaemia or low blood sugar as the cause of deaths.

As the disease’s killing spree continued, the Bihar government’s utter disregard to the eerie and vexing alarm also persisted. Bihar’s Health Minister Mangal Pandey was more eager to know cricket score during his meeting with officials over the situation than about the ways to realistically deal with the threat. BJP leader and Union Health Minister Harsh Vardhan could only reiterate promises that he made five years ago on a similar situation, which still remain unfulfilled due to the callous attitude of the Bihar government towards public health, and not take any real step to contain the epidemic.

Both the Union and the Bihar government were sent notices by the National Human Rights Commission (NHRC) for the children’s death. The NHRC raised the doubt that National Programme for Prevention and Control of Japanese Encephalitis Virus/Acute Encephalitis Syndrome (NPPCJA) is not properly implemented in Bihar, especially in Muzaffarpur, which contributed to the AES deaths. The NHRC also raised questions about the treatment provided and the relief package offered by the state to the aggrieved family members. There are allegations of corruption in executing the NPPCJA in Muzaffarpur after initial steps were taken to identify and contain the outbreak of the AES a few years ago. It’s, of course, a commonly understood fact that no amount of “relief” from the government can actually compensate the loss suffered due to death of children and it doesn’t provide redemption to the government for its utmost failure in providing proactive universal public healthcare at the first place, which can be attributed as the primary cause of so many deaths.

Though there has been a general agreement among doctors and medical experts that the AES virus is active during the months of April, May and June, spreading mostly around the litchi fields, and a common pattern has been observed, which connects the death of children with the consumption of litchi, many doctors have rejected the theory of litchi consumption and also asserted the fact that the disease isn’t a fatal one, unless there is a socio-economic condition that makes it fatal for children.

In a report published by News18, Dr Gopal Shankar, the acting Head of Department of Shri Krishna Medical College and Hospital (SKMCH), Muzaffarpur, refuted the litchi theory. In the same report, Dr Arun Shah, a resident of Muzaffarpur, claimed that the entire hullaballoo over the issue is ignoring the socio-economic factor that’s playing havoc in the background. These are valid observations made by Dr Shankar of SKMCH, where a large number of children died, and by Dr Shah.

The AES is actually an ambiguous term given to the disease, while it’s actually a very bespoke outbreak that has a specific target group. If a socio-economic analysis of the AES outbreak and children’s death in Muzaffarpur is made, then it will be found that the majority of the casualty were from poor households, where arranging a square meal a day is quite a challenge. Girl children form the majority in this toll, as due to patriarchal social customs they are most likely to go to bed each night on an empty stomach vis-a-vis the boys. Malnutrition in these children, especially girls, causes hypoglycaemia, which turns fatal due to the warm and humid weather, as well as consumption of litchi on an empty stomach, in some cases, may aggravate the situation. Due to this malnutrition, the immunity system is weakened and a neurological dysfunctioning is caused by the virus.

Both the Union and the state government remained mum on the question of malnutrition; Chief Minister Nitish Kumar and his cabinet hushed up the malnutrition angle and brought in the BJP’s toady media to lay the blame on the shoulders of the doctors who have been trying hard to save each patient. Modi’s lackey Anjana Om Kashyap, a notorious Brahminical rabble-rouser who seconds as a mainstream media house’s executive editor, came to Muzaffarpur to stage a drama in a local hospital’s ICU, violating all infection guidelines. She tried to bully the doctors trying to save patients by calling them responsible for the children’s death, while shamelessly concealing the heinous role of the JD(U)-BJP combo’s government, which didn’t act against the prevalence of severe malnutrition.

The acceptance of the existence of overwhelming poverty and malnutrition, which also have a caste-gender hierarchy, will actually slap the JD(U)-BJP regime on the face and expose the farcical development claims of Kumar, who is nicknamed “Mr Clean” due to the love showered upon him by the upper-caste feudal landlords and comprador capitalists. The total blackout on the poverty angle is done deliberately by the government, and its toady servile media, to equate the blistering of this epidemic with other such instances like dengue, Japanese encephalitis or cerebral malaria.

Dr Shah raised the poverty angle in the News18 story and linked the time taken to carry a sick child to the nearest hospital with the fatality ratio. The earlier the patient reaches the hospital, the more are the chances of survival and vice versa. The lack of a proper proactive public healthcare system from the health centre level has seriously worsened the issue. The poor families are facing immense difficulty in transporting patients to the SKMCH or the nearby Krishnadevi Deviprasad Kejriwal Maternity Hospital. If there was an availability of medical care and treatment at the primary health centre level, then the death toll would’ve been controlled. However, a government that has shrugged off the responsibility of providing a stronger public healthcare system to the common people and welcomed the private sector’s unbridled profiteering from people’s agony, will of course not care about the plight of the poor in getting proper treatment during a life-threatening situation.

Be it Health Minister Pandey, Union minister Vardhan, Chief Minister Kumar or Prime Minister Narendra Modi, none of them can evade the responsibility for these deaths. It’s the policies regarding health taken by them that have caused these deaths. The Modi regime’s Ayushman Bharat scheme, nicknamed “Modicare”, which promises a sum insured of Rs 500,000 per family, is actually unhelpful during the hour of crisis like the Muzaffarpur AES outbreak. The families need to spend money from pocket to transport the patients to the hospitals, which they are unable to do due to their poor financial condition. By the time they arrange the money, the patient’s condition worsens and the scope of survival diminishes. A health insurance scheme sold by the government isn’t helpful in this context and calls for an overhauling of the public healthcare system to make it proactive, robust, responsive and universal for the poor and the downtrodden masses. Yet, in a neo-liberal economic framework, where policy diktats come from Washington DC and Brussels, it’s unlikely that the governments at the Union or the state levels will even dare to talk about strengthening the public healthcare model.

The people of Bihar in general and those of Muzaffarpur in particular, suffer immensely due to the lack of proper public healthcare system. The need of the hour is to pressurise the government through people’s movement to overhaul the entire public healthcare system, increase allocation in public health, fill the vacant positions and increase the staff strength, increase the spending on medicines, equipment and technology to compete with and beat the private healthcare facilities. It’s nonetheless the government’s responsibility to provide good healthcare service to the common people, right from the village level. There can be no good excuse for evading the responsibility of providing universal and proactive public healthcare to the common people who face the consequences during exigencies. If the government is reluctant to do so due to WTO or World Bank’s pressure, then such a weak government must be trashed by the people through massive democratic struggles.