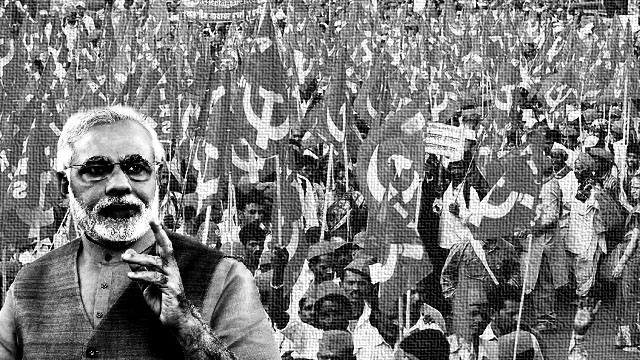 The economy is in sheer tatters and the country is worrying about not reaching the southern side of the moon. That’s how the PR exercises and advertising campaigns done for Prime Minister Narendra Modi‘s self-aggrandisement, spending billions from the public exchequer, have shaped the priorities of the educated elite and urban middle class Indians, who mostly belong to the upper-caste echelon of the Hindu caste hierarchy and vote for the Hindutva fascist Bharatiya Janata Party (BJP) because they want to derive orgasmic pleasure from the tormenting of fellow Muslim citizens than fixing the economy going downhill.

For the economy, Modi has already fixed an ambitious target of $5 trillion GDP by 2024, and it’s an achievable target going by Modi’s past history of tweaking and twisting of economic figures to suit the political ambition of his Hindutva fascist cavalcade. Very soon, in one mundane morning of our quotidian existence, we the Indians living in a Modi-fied India will be told to rejoice as we reached a $5 trillion economy, without telling us exactly how does that translates into our happiness when the majority of our people live on less than one dollar a day and 1% of the population controls  73% of India’s wealth? No one will tell us how the $5 trillion-worth economy will save the tribal people of Jharkhand and Odisha from becoming victims of malnutrition or state’s repression. It won’t tell us how the Kashmiris, locked in their houses and rendered absolutely incommunicado, can know that now they are part of a $5 trillion economy, thanks to Modi’s largesse?

We will continue in that phase of “being Indian” a quintessential of which is not questioning narratives thrown at our faces by the government. The government is always right, or maybe right. We will accept what is said, even if we are told tomorrow that India has just become a $50 trillion economy because the basics of “being Indian” is to never question the “Supreme Leader” and his coterie. Hailing the Supreme Leader and believing his words as Gospel’s truth is a mandatory pre-condition of becoming Indian.

Our problem isn’t the fact that we are ruled by a megalomaniac fascist dictator Modi along with his coterie of die-hard arch-reactionaries. It’d have been simple if that was the problem. The real problem lies in the absence of a credible, uncompromising, always-on-action and visionary opposition force that can take on the government. India lacks a vanguard that can unite and lead it against Hindutva fascism. It lacks the centre on which the circle can be drawn.

The need of the hour is not mere rhetorical opposition to the Modi regime’s incessant anti-people acts. The entire opposition bloc is turned into mere press conference mongers by Modi and the BJP. None of the parties, including the absolutely crisis-ridden and bankrupt Congress party and its ardent lackey, the parliamentary left parties, are able to take on the government in street struggles and mass movements. Actually, since 2014, with the rise of Modi to the highest echelon of power, India never witnessed any major people’s struggle against the government that could’ve forced Modi to his knees like tyrants before him.

Over issues like Hindutva-incensed mob lynchings, inflation, Rafale Jet scam or farm crisis, regular rallies were taken out, some of them like the ‘Kisan Long March‘ of Maharashtra rocked the country’s conscience, yet none of them could sustain, could create a long-term, unfading and deeply entrenched influence among the common people. Leave alone the middle class, which is deeply enthralled by Modi’s theatrics, even a large section of the poor didn’t get influenced by these movements as they appeared so boorish and, at times, so disarrayed, that they didn’t promise any immediate solutions to the target audience.

There has been no objective analysis of Modi’s landslide victory in the 2019 general election. Most of the mainstream parliamentary opposition parties blamed electoral fraud committed by Modi’s puppet Election Commission for their ignominious loss. Why Modi managed to secure such a huge margin even by underperforming for five years and sending the economy to critical care? What’s that factor that the BJP and Modi himself used to sweep the election? Is it merely the electronic voting machine (EVM) tampering that gave Modi a secure lead? Can the opposition lay blames on the EVM and stop their own retrospection?

Actually Modi’s landslide victory and the opposition’s humiliating defeat are not due to the EVMs merely. There can definitely be EVM tampering, however, that’s not the reason. The real reason is the ability to create narratives and rally people around them. Modi, his party — the BJP— and its paternal body Rashtriya Swayamsevak Sangh (RSS) are doing that constantly. They are creating one after another narrative to keep the loyalty of the voters and supporters intact and to pulverise any attempt by the weakened opposition to erect a barrier or alternative.

By successfully juggling issues, sweeping inconvenient facts beneath the rug, and by peddling communal hatred against the Muslim community, Modi and the RSS-led ecosystem have made the upper-caste Hindu elites and middle class, who form the core of political decision-makers in the country, believe that the country is progressing in the right direction despite hiccups, like the present economic crisis partially for which Pakistan and China will be blamed. The opposition is merely tailing the Modi regime and tom-tomming around the central narrative fixed by the ruling clique. They have nothing more to offer, no new and alternative narrative to build up.

Today, when the Modi regime has locked down Kashmir for more than a month, pushing it to a reign of unprecedented tyranny and unleashing massive human rights violations there, when the economy is in an abysmal crisis and the government is boasting about its lunar mission, when unemployment is at its four-decade-high peak and the government is talking about Ram temple in Ayodhya, then the entire opposition, led by the ailing Congress party, has limited its periphery within social media platforms, especially the micro-blogging site Twitter, and also in press conferences where they utter carefully selected verbiage to launch mild criticism of the government. No one is seen on the streets challenging the Modi regime directly out of sheer fear.

Scared by the government’s vendetta regime, scared by the arbitrary arrests and house arrests done by the BJP at the direction of the RSS’s top brass, and scared by the vitriol spread by the RSS men about them, the mainstream opposition parties have cocooned in their shells and even started seeking reconciliation with the Modi regime to save their own skin. The ridiculous liberal theory of hailing the constitutional post held by Modi, despite opposing him, peddled by the likes of Jairam Ramesh or Shashi Tharoor, will not be saving these so-called liberals from the wrath of the state.

Today, when it’s imperative to build a movement against the Modi regime, the mainstream parliamentary opposition has no strength left, no vitality left to reach out the people at the grassroots, listen to them and build up a new narrative to corner the government. The only narrative that the opposition had earlier built around Rafale Jet scam is now thrown to the backburner for unknown reasons. Now, when it has a scope of building a mass movement over unemployment, job loss, closure of factories, farm distress, Kashmir, National Register of Citizens (NRC) exercise, corruption, etc, it’s denying to come out of its comfort zone.

There are immense possibilities to turn the tables in the political arena, however, the namby-pamby mainstream opposition can’t even take a single decisive step to hit hard at the Modi regime’s fascist rule and bring it down using the people’s power. There is no centre of gravity in the opposition camp, fractured due to the bitter contradiction over share of power and fame, when they are eventually going to have neither in the near future, and the clash of ego, when they will all land in jail if they don’t act against the government on a proactive basis from now onwards.

Modi is taking the shots, the opposition has become a reactive camp. They have no ability to build narratives and wean away people from the BJP’s camp. They are still allowing the people to cherish the thinking that Modi will make things happen and a $5 trillion economy is on the way. It’s indeed a fact that now fighting elections will be a formal affair with no real significance as nothing can stop the Hindutva juggernaut through electoral alliances anymore. The inability of the opposition to evolve will embolden Modi and the Hindutva fascists, while India will continue to sink in the mire of a severe economic crisis.