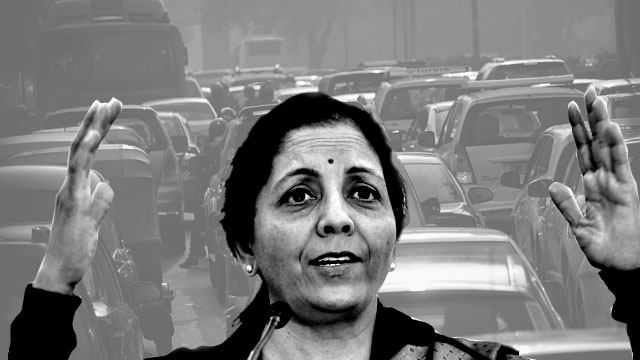 In a recent interview, Bharatiya Janata Party’s (BJP) Member of Parliament (Rajya Sabha) Dr Subramanian Swamy predicted that if Prime Minister Narendra Modi’s government can’t take corrective actions to bring the economy back on the tracks, then people will start protesting against it on the streets in six months time. He equated the situation with one that prevailed in 1967 when the Congress party suffered a huge setback in the assembly elections in the states as various opposition parties made a kill by capitalising on a troubled economy.

Despite being a paranoid loose cannon, who peddles conspiracy theories and supports the Hindutva fascist camp led by the Rashtriya Swayamsevak Sangh (RSS) — the parental body of the BJP and the ideological guardian of the Modi regime — Swamy has been a critic of the Modi regime’s economic policies since 2015, as he eyed the finance minister’s chair harping on the fact that the BJP has no reputed economist at its top rung. Swamy has been an economist, a professor and also one of the early proponents of the neo-liberal economy in India, albeit at the behest of the US imperialism. Swamy’s jibes and lampooning of his own party’s government increased after Nirmala Sitharaman became the finance minister in Modi’s second innings, which slammed the door of opportunity on Swamy’s face.

Unlike a lawyer like late Arun Jaitley or a chartered accountant like Piyush Goyal, Sitharaman is an MPhil in economics and she had studied the subject quite closely. Yet, her ministry’s inability to come up with any rock-solid solution to resolve the issue of economic slowdown, the growing mass job cuts, pessimism in the stock market, growing non-performing assets (NPAs) of public sector banks (PSBs) and an acute farm crisis, proves that the minister is either not practically skilled in dealing with macro and microeconomic challenges or she isn’t in charge of the Finance Ministry at the first place. Maybe, she is merely helping Modi and the BJP in ventriloquism by being nothing more than a puppet. This is a reason that she is vouching like an amateur over economic challenges providing Swamy with enough ammo to fire a salvo. Many opponents are doing the same at this point in time.

Rather than responding to the gigantic challenges posed by an unprecedented economic slowdown, which was triggered by Modi’s infamous demonetisation drive that started in November 2016, followed by the disastrous rollout of Goods and Services Tax (GST) in 2017, Sitharaman is busy making infantile claims that anyone with an iota of economic knowledge will rebuke. Each of her statements, her decisions and her claims — laced with hubris and audacity — prove that the finance minister and the government itself have no real intention to resolve the economic crisis, rather, utilise the situation to sell out government resources and use public exchequer to bail out the beleaguered corporate sector, especially those owned by Modi’s hardcore supporters and donors.

The biggest piece of comedy by Sitharaman is the list of cosmetic measures she announced in August to boost the economy. They are all half-hearted measures taken to appease the big comprador capitalists who weren’t getting equal treatment from the Modi regime vis-a-vis Modi’s patrons like Gautam Adani, Mukesh or Anil Ambani. While the government’s immediate focus should be on rural and urban demand generation at the grassroots by providing employment opportunities or undertaking massive welfare programmes, which can, in turn, generate employment, it’s rather wasting time on projects like public sector bank merger and bank recapitalisation to help Adani, Ambanis and their ilk with more credit inflow, which will, eventually, pile up as bad debts due to acrobats that these crony-comprador capitalists perform to dodge repayment.

The automobile sector is one of the pain areas of the Indian economy right now, and it’s also one of the major drivers of the present economic slowdown. The automobile sector, along with its upstream and downstream manufacturing units, is one of the key industries of the Indian manufacturing sector, which employs the lion’s share of workers, both organised and unorganised. More than 5m people are associated with this industry through direct or indirect means, and through them, the industry has a ripple economic influence on 50 million people.

From micro, small and medium enterprises (MSME) to big automobile factories, the crisis in the sector, resulting from falling sales, has gripped everyone and millions have either lost their employment/source of income or are at the verge of it, facing an uncertain future. The crisis crippling all players of the automobile sector, from MSMEs to the large-scale factories, is also affecting the economy of the regions where they are based in and all these because of a considerable fall in the sales figure.

According to the Society of Indian Automobile Manufacturers (SIAM), there has been a considerable drop in the sales of automobiles in this financial year (FY) vis-a-vis FY 2018-19. The SIAM data shows that passenger car sales fell 23.54% with only 1,109,930 units sold since April 2019. Two-wheeler sales dropped 22.24% to 1,514,196 units, while medium and heavy commercial vehicle sales plummeted 54.3% to 15,573 units so far. This crash in sales figures took a massive toll on jobs, as more and more people were laid off from various roles in the automobile ecosystem.

Quoting Federation of Automobile Dealers Associations (FADA) president Ashish Harsharaj Kale, Newsclick reported that 200,000 people have lost their jobs in the first three months of FY 2019-20. It’s a figure sans the 32,000 who lost their jobs in the 18-month-long period during which 286 automobile showrooms were closed in 271 cities of India. Kale also warned that though the initial job cuts were mostly in the sales roles, the dealership companies are contemplating firing the servicing and technical manpower as well if the service needs fall considerably due to lower sales. It will add more to the already massive army of unemployed people lurching in the dark.

Why the sales of automobiles are down? Though various research reports, the industry’s own observation and the experts’ opinion point towards falling demand due to less dispensable income in people’s hand, conservative approach of banks and non-banking financial companies regarding lending to control their NPAs, high GST of 28% on vehicles, the Supreme Court’s order to not register Bharat Stage IV vehicles from 1st April 2020 onwards, the advent of electric vehicles, etc, the finance minister came up with her own reasons, which turned her into a laughing stock in a crisis-ridden country.

During a press meet on 10 September, Sitharaman said that the sales of passenger cars are falling due to the “behavioural pattern of the Millenials”. She said that the Millenials tend to prefer app-based taxis more than cars! This isn’t a hilarious prank, but a real assessment made by an MPhil in economics from a reputed central university. Though few loose cannons of the BJP earlier tried to score their brownie points by peddling the same logic now used by Sitharaman, it was totally a shocker for everyone to see the finance minister herself gulping the bait prepared by her half-backed, Sangh-trained colleagues.

Sitharaman’s assessment is absolutely wrong and is based on “raw wisdom” that her prime minister loves to flaunt from time-to-time. It’s not that app-based cab services like Ola or Uber have caused a fall in the demand of vehicles as these companies don’t operate heavy vehicles or commercial vehicles but the figures given above show a significant drop in their sales as well. By calling the “behavioural pattern of the Millenials” as the core reason of the automobile sector’s crisis, she is not only mocking the critical situation that needs expert handling but she is also exposing her own fallacy as a finance minister.

Her mulish approach towards the problem from a denial-mode, ignoring the fact that the number of taxis plying on the streets for the app-based companies haven’t increased, that the popularity of the app-based cab services didn’t increase passenger car sales, which it should have, clearly indicates that the government is in no mood to think and innovate any solution to the persistent problem of the automobile sector. The government is not only nonchalant, but it’s also aggravating the crisis by not providing the relief needed by the automobile industry like lesser registration costs, lower GST than the present 28% and a waiver of taxes on fuel so that it can attract buyers. Sitharaman and her subordinates are willing to live in an echo chamber, cutting off their ties with reality.

The government’s next GST council meeting on 20 September will not allow the scaling down of GST on automobile or fuel as tax collection fell below the benchmark of Rs 1 trillion and under no circumstances, the government can let go a fixed part of its revenue coming from fuel taxes. The revenue deficit of the government is now fulfilled by usurping the surplus fund and contingency fund of the Reserve Bank of India, whose ultimate destiny is not known to the much-learned finance minister herself.

Swamy had earlier criticised the Modi regime over the absence of recognisable economic thinkers in the cabinet. It was an aim to push his own CV through the higher echelons of the BJP for the position of finance minister, which saw rapid changes during Modi’s first tenure. Though it’s, of course, questionable how Swamy would have handled the situation or acted independently when Modi himself takes all crucial decisions and use the ministries to merely utter them, the present scenario shows how mediocrity, sheer corporate appeasement and economic mismanagement can lead an economy to a realm of utmost chaos and shatter it.

The present economic slowdown is not caused by Sitharaman but by the intricacies of the capitalist system, which regularly generates a crisis. As ardent worshippers of capitalism, neither Sitharaman nor Swamy could resolve the core issues that cause such a major crisis. They can, at their best, try to cauterize it with furtive opportunism. This wouldn’t solve the problem as it’s a problem of the system itself. Under this disarrayed regime and its greedy corporate masters, it’s evident that the present economic crisis will ripen in the days to come and through its epidemic ripple effect push each sector of the economy into an unprecedented calamity, resulting into more job losses and distress.