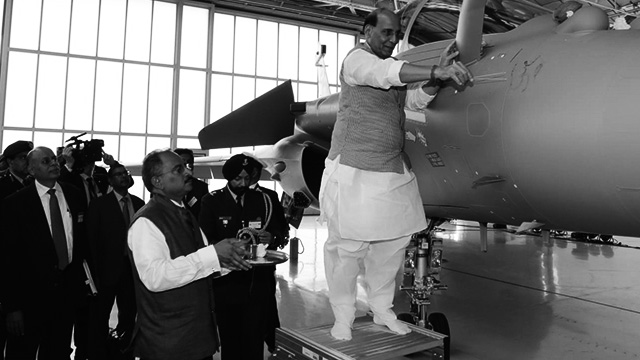 Defence Minister Rajnath Singh took the symbolic delivery of the first Rafale Jet — a medium multi-role combat aircraft (MMRCA)— on behalf of the Indian Air Force (IAF) from Dassault Aviation in France on 8 October 2019. The day was a carefully chosen, as it coincided with the north Indian Hindu festival of Dussehra, which is the foundation day of the Hindutva fascist Rashtriya Swayamsevak Sangh (RSS), and also celebrated by the IAF as Air Force Day. Singh is a life-long member of the RSS and is a senior leader of its political wing, the Bharatiya Janata Party (BJP). On this occasion, Singh conducted a Shashtra Puja (weapon worship) of the plane, following the RSS’s tradition, and then inducted the controversial Rafale Jet in the IAF.

The $8.7 billion-worth Rafale Jet scam can be called the mother of all defence scams and Prime Minister Narendra Modi’s personal complicity in this scam was exposed by the opposition Congress party, investigative journalists and several inside-whistleblowers through numerous evidence. The 2012 MMRCA deal between the IAF and Dassault Aviation for 126 MMRCA jets was scrapped in 2015.

A new deal was negotiated, in which the number of jets was reduced to 36 and the reputed public sector company Hindustan Aeronautics Ltd (HAL), chosen as Dassault Aviation’s offshore partner, was replaced to fit the BJP’s big-ticket donor Anil Ambani’s novice firm Reliance Defence Ltd. It’s accused that despite several red flags from the Ministry of Defence, the Prime Minister’s Office took this decision. The IAF cooperated with Modi and the present Air Chief Marshal RKS Bhadauria played a crucial role in the new negotiation.

It’s not merely the Rafale Jet scam, the IAF also helped Modi to survive the anti-incumbency wave and return to power triumphantly in the last general election. On 26 February, the IAF conducted a purported airstrike in Pakistan, targeting a terror hideout of Jaish-e-Mohammad, to avenge a militant strike on 14 February in south Kashmir’s Pulwama, which killed 42 soldiers. Though the IAF claimed victory it refused to share any evidence to validate its claim of eliminating terrorists.

Pakistan allowed the international press to access the location and they showed that only a few trees and a crow became victims of the strike. However, the Indian government and the IAF created a chauvinistic narrative around the strike and used the optics to stoke jingoism among the politically-crucial upper-caste Hindus ahead of India’s general election. The BJP and the RSS vehemently attacked anyone seeking evidence of the strike killing terrorists as “anti-national”. The Indian press followed the suit and acted as the government’s amplifier in vilifying critical voices.

On 27 February, Pakistani F-16 Jets tried to attack Indian military installations in the Nowshera sector. A squadron of IAF’s MiG-21 Bisons chased the F-16s and purportedly shot one down, which Pakistan vehemently denied. An audit by the US officers also claimed none of the F-16s was shot down. However, the Pakistani air defence shot down one MiG-21 Bison and Pakistanis captured its pilot, Wing Commander Abhinandan Varthaman. At the same time, an IAF Mi-17 helicopter on a routine mission was identified as hostile by the Indian Spyder air defence system, which fired a Derby missile that shot down the helicopter in Budgam, Jammu & Kashmir, killing six IAF personnel onboard.

To save Modi from ignominy during the election season, the IAF concealed the fact that the Mi-17 helicopter was shot down by its own air defence and revealed it only after the elections. Though Bhadauria admitted now that the Budgam incident was a “big mistake”, the fact that can’t be undone is his IAF and the press lied to the nation and the aggrieved family of the soldiers, who died on board of the Mi-17 helicopter, just to save the prime minister a discomfort.

It’s not only this concealing of facts, but the IAF also didn’t bust the falsehood peddled by Modi during a television interview. Modi claimed that though the IAF officers wanted to abandon the mission on 26 February due to rain, he advised them using his “raw wisdom” to turn the issue into an opportunity and use the clouds as a cover from radars! Modi said that the IAF followed this absurd order to the letters and achieved success. Though Modi’s “raw wisdom” and theory of using clouds to escape radar detection became viral topics for memes on social media and he was widely mocked, the IAF didn’t reject the theory, making a laughing stock of itself in rival Pakistani and global press, which spoiled its reputation.

Now, when these goof-ups have actually tarnished its image, then, the IAF is celebrating the same controversial airstrike on the Air Force Day to show its servility to the ruling BJP’s political narrative. It’s continuing to provide the BJP political leverage against the opposition. This nexus was clearly visible when former air chief marshal Birender Singh Dhanoa praised Modi’s “leadership” before retiring, for the Balakot strike.

Despite corruption allegations, the Rafale Jet is inducted in the force without investigation. The defence minister is performing the RSS’s stunts and showcasing Brahminical supremacy in Paris to assert that the state, the party, the leader and the military are now one and inalienable, which is quintessential of fascism. The determination of the Modi regime to go for the Rafale Jets and to allow Ambani’s Reliance Defence Ltd to profiteer at the cost of HAL’s agony is driven by sheer hubris and the political urge to demonstrate its aggrandizement to the opposition and critics. Choosing the Air Force Day indeed helped the BJP to blend the occasion of displaying its corporate servility and promotion of cronyism with nationalism. By losing its independence, autonomy and professional decision-making skills to the greed and crassness of the BJP and the RSS, the IAF is not only mocking its own history, but it’s also jeopardising India’s national security.