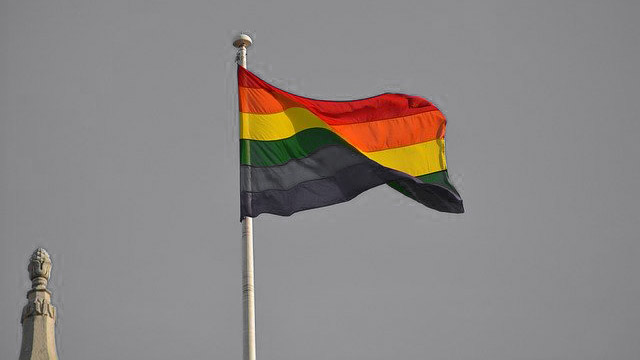 A plethora of protests bring a wide array of protesters, each with their own ideologies and agenda. Many protesters are holding up red, many are upholding the blue, even many waving the tricolour and some the rainbow flags. At the same time, amidst the severest onslaught from fascism, the chief discourse is rotating around glorifying and saving the Constitution, which is extending help to the unbridled chauvinism of fascism. The movements by the lesbian-gay-bisexual-transexual-queer (LGBTQ) community to save the Constitution in different places have thrown open some questions and political problems that need elaborate discussion in the present context, when Hindutva fascism promoted by the Rashtriya Swayamsevak Sangh (RSS) and its parliamentary wing Bharatiya Janata Party (BJP) has wreaked a havoc on all marginalised people, including the sexual minorities.

The rainbow flag had originated from San Francisco, US, designed by artist Gilbert Baker in 1978 to show the diversity in the homosexual community. Only this rainbow, along with the save Constitution discourse, would not help to fight the rabid reaction of Hindutva fascism since this LGBTQ flag has an imperialist and reactionary background itself. Fascism, including Hindutva fascism, acts in the interest of the imperialists; it serves the reactionary monopoly-finance capital’s interests. Hence, if homosexuals don’t quit advocating the coalition with the bourgeoisie, unless they connect their struggle with that of the working class’s struggle for political power, their struggle will end up as a corporate-funded fashion element.

We must fight homophobia and uphold their rights but their connection with international monopoly-finance capital needs to be abandoned immediately alongside the cynicism and hypocrisy of bourgeois reaction. If we look back at the communist history, after the 1917 Russian Revolution, same-sex sexual contact was legalised between consenting adults. In Azerbaijan, Uzbek, Turkmen Soviet Socialist Republics it was criminalised, which was criticised by other Soviet Socialist Republics. In communist-ruled states like Cuba, Laos, etc, homosexuality is an accepted phenomenon but not same-sex marriage. In DPR (North) Korea, China and Vietnam homosexuals do face legal difficulties.

In the former communist-ruled Congo, homosexuality was always legal yet still, now people face legal challenges. In the case of German Democratic Republic (East Germany), same-sex sexual intercourse was alternatively beheld as a remnant of bourgeois dissipation and threat to the social and political health.  Though in 1968 homosexuality was officially decriminalised in East Germany. Such history records are always cited by the capitalists to woo the LGBTQ community towards itself.

The hyper-nationalist chauvinism promoted by Prime Minister Narendra Modi-led BJP’s regime will definitely persecute the LGBTQ community in the longer run. Therefore, for their own survival, the LGBTQ community must fight against the Modi regime and Hindutva fascism, however, knowing well that they have to fight the entire monopoly-finance capitalist empire by becoming allies of the working class and by subordinating their identity struggle to the working class’s struggle for political power.

Homosexuals must be fighting the individualist attitude and imperial connection of the corporate-funded LGBT community to bring themselves back in the real struggle of working mass rather than getting allied with cosmetic ones funded by the US and its corporate houses. The save the Constitution rhetoric won’t help the homosexuals in combatting and defeating Hindutva fascism of the RSS and BJP or in achieving an iota of freedom, rather, it will be only under a people’s democratic state, where the democratic rights of all oppressed people shall be established, that homosexuals will receive their long-due societal acceptance, dignity and respect. For the sake of that future, they must join the anti-fascist caravan en-masse quitting their illusory state of mind that tells them that reformism will help them in the longer run.