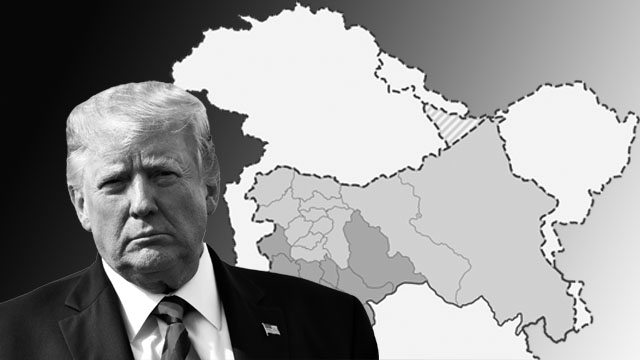 US President Donald Trump’s visit to India casts a dark shadow on the fate of the Kashmiri people, who are reeling under an unprecedented inhuman lockdown since 5 August 2019 and have gone through the world’s longest internet blockade and communication embargo for months. Bloodshed in Kashmir has been the ritual whenever any significant foreign entourage came to India. Under Prime Minister Narendra Modi’s reign the ordeal will continue unabated, it seems.

On 19 March 2000, when former US president Bill Clinton visited India, 35 Kashmiri Sikhs were gunned down in Chattisinghpora village of Anantnag district. One more woman died due to cardiac arrest after seeing bullet-ridden bodies. The Sikhs are a minority community in the Kashmir valley and are often used as an expendable buffer by the Indian state in its colonisation drive.

Though New Delhi blamed Kashmiri separatists for the massacre, no case could be proved. The Indian Army massacred five Kashmiris in the infamous Pathribal encounter, which was later exposed as a fake one, resulting in protests in the valley. The Indian forces even fired upon protesters and killed one of them. The real perpetrators were never found and the people of the valley suspect the handiwork of Indian intelligence agencies behind the Chattisinghpora.

Expressing apprehensions over the security of the Sikhs in Kashmir valley, Jagmohan Singh Raina, the chairman of All Parties Sikh Coordination Committee (APSCC), a platform of all Sikh organisations of Jammu & Kashmir, said: “The whole India seems to be busy in making preparations for Trump’s visit, but for Sikhs of Kashmir, the visit has brought in fears that the members of the community are yet again on the radar. The Sikhs are feeling insecure and they fear that something untoward might happen on the eve of Donald Trump’s visit.”

Apart from the Sikhs, the Kashmiri Muslims are also worried. During the private visit of members of the European Parliament (MEPs) to Kashmir, unidentified gunmen shot and killed six Bengali migrant workers who came to work in apple orchards. Their killing was also blamed on separatists, but none of the tiny groups operating in the valley took responsibility. India was blamed for this bloodshed in Kashmir as it’s only the Modi regime that has benefitted from the attack as it could titillate the right-wing MEPs showing an imminent threat from ‘Islamic terrorism’, which would justify the inhuman military siege.

If a similar incident happens, then it will overshadow the vehement demand by several US Congressmen and women for Trump to raise the Kashmir issue with Modi. A US official said that Trump will attempt to “mediate” to reduce tension between India and Pakistan over the issue. However, bloodshed in Kashmir will strengthen Modi’s case and out of his Islamophobia, Trump will continue to support the Indian standpoint on Kashmir. The US politics has been polarised to some extent on Kashmir and as the presidential election draws closer. Any bloodshed in Kashmir during Trump’s visit will push the case of Kashmiris in the oblivion as the American anti-Trump lobby will also join the “separatism is terrorism” bandwagon.

The recent arrest of police officer Davinder Singh, who was accused by 2001 Parliament-attack case convict Afzal Guru of falsely implicating him, exposed a small part of Indian state’s deep involvement in creating the ‘terrorism’ narrative in Kashmir. The bloodshed in Kashmir caused by the Indian state has traumatised the Kashmiri people for decades. All massacres from that of the Kashmiri Pandits, the Sikhs of Chattisinghpora to the recent killing of migrant workers in Kashmir has actually benefitted the Indian ruling classes in fuelling xenophobia and jingoism about the Kashmiri people’s struggle in India.

The bloodshed in Kashmir targeting minority communities and migrant labours or tourists will only strengthen the case of the Hindutva fascists. Any attack on Kashmiri Sikhs will also impact the massive unity forged between the Sikhs and Muslims on Modi’s discriminatory Citizenship (Amendment) Act, 2019, which is exhibited in the heroic movement of Shaheen Bagh. Bloodshed in Kashmir, during Trump’s visit or afterwards, will cause a setback to the legitimate case of overwhelming Kashmiris and benefit the Indian state; thus, there is an ardent need for the Kashmiri Muslims to remain vigil to protect their Kashmiri Sikh and Pandit neighbours from any kind of heinous conspiracy hatched by the Hindutva fascist state for its own gain.