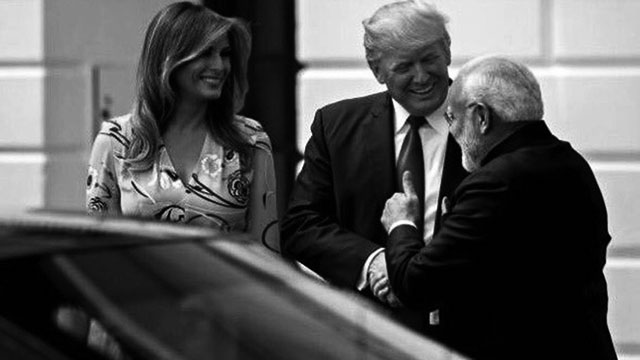 As Prime Minister Narendra Modi prepares to host US President Donald Trump and his family during their maiden India tour from 24 to 25 February 2020, there are several questions raised on the real purpose of the tour and whether India has anything to gain from Trump’s India visit as it’s spending a huge amount of money in the middle of an unprecedented economic crisis? While on one hand the Indian ruling classes and the mainstream press are pinning their hopes on Trump’s India visit to strengthen Indo-US ties and Modi wants to create a positive optics of enjoying American support when India is globally criticised over the Kashmir lockdown and the discriminatory Citizenship (Amendment) Act, 2019, Trump, on the other hand, has dismissed the speculations of something big happening during the tour and called it an insignificant two-day-long tour. This puts to question Modi’s grandeur in welcoming the most-despised and ridiculed American president in history using the taxpayers’ money.

What’s India gaining from Trump’s visit? In this article, we have discussed that Trump’s incessant ranting against India and China over high import tariff barriers resulted in the withdrawal of India’s Generalized System of Preferences benefits, resulting in a setback to India’s merchandise exports to the US. There is a mini trade war waged by Trump against India as well. Still, Modi continued appeasing Trump by not retaliating against the high tariffs imposed by the US on Indian imports. Rather, according to reports, India proposed to lower tariffs on poultry and dairy imports from the US, even at the cost of jeopardising the livelihood of millions of Indian farmers.

During Modi’s visit to Austin, Texas, for the Howdy Modi event in September 2019, Trump promised to sign a “trade deal” with India when he visits India. Apparently this announcement was made with a view of wooing the 2.5m-strong Indian-American voters. Trump wants the upper-caste Hindu Indian-American voters to support his bid for the second term playing a pro-Hindutva card. The same Trump complained about India hitting the US and its new protectionist policies “very hard”, and he said though “Modi is a great friend” there won’t be a trade deal. Trump may sign a deal before the election, scheduled in November, but not earlier. Where does that put Modi’s gala preparation for Trump’s India visit?

If there is anything that will materialise during Trump’s India visit then it’s Modi agreeing to buy the Seahawk helicopters for the Indian Navy and also the integrated air defence weapon system (IADWS). This will be costing the Indian exchequer an immense amount, however, it’s the compulsion of the Modi regime to buy IADWS as Trump is angry over India’s purchase of missile defence system from Russia. Trump will also push the Modi regime to deploy Indian soldiers in Afghanistan after the US withdraws its forces before the election. Indian engagement in Afghanistan will be a catastrophe and entangle New Delhi in a long-drawn, bloody conflict.

Earlier, during his Texas visit, Modi happily agreed to buy shale oil from the Texas Oil Mafia, which will increase India’s balance of payment deficit. It will also require immense investment in recalibrating the oil refineries of India to refine shale oil. India has already stopped importing oil from Iran under the US pressure and increased imports from Saudi Arabia. With the import of shale oil, the price of fuel will go up considerably and increase the inflation manifold.

In a nutshell, Trump’s India visit is a lavish holiday for the Trump family at the cost of India’s taxpayers and its sovereignty. The massive arrangements made by Modi and his coterie to please the master, will actually not bring any benefits to India, rather prepare the country to become a dumping ground for the US and turn Indians into cannon fodders by allowing Washington to use Indian territory as an unofficial military base against China and Iran. Trump is a warmonger and a white supremacist fascist. No Indian, who holds the principles of democracy, equality and freedom dear to heart, can welcome Trump’s India visit or cheer his hob-nobbing with Modi. The Trump-Modi nexus is a fascist nexus between an imperialist master and a neo-colonial slave, which must be opposed and defeated to save Indian sovereignty.