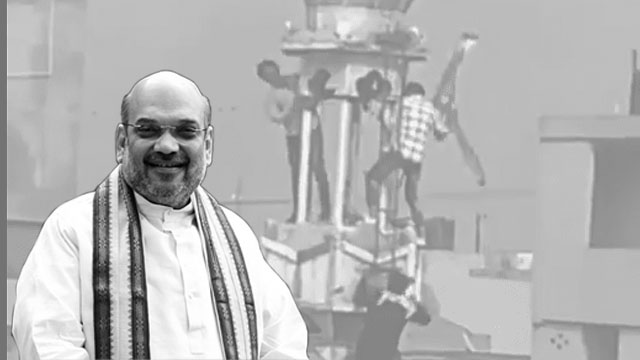 Ever since the Delhi’s anti-Muslim communal pogrom began under the aegis of the Rashtriya Swayamsevak Sangh (RSS) — the parental body of India’s ruling Bharatiya Janata Party (BJP) and ideological wellspring of Hindutva fascism — and feral mobs, consisting of young men and teenagers, rampaged on the streets of the capital city’s northeastern parts, there has been a constant demand for the resignation of Amit Shah, the Union home minister, to whom the Delhi Police reports to. Highlighting the complicity of the Delhi Police in the pogrom, its unapologetic support to the perpetrators of violence and its selective rage against the Muslims, politicians from the Congress party, including its acting chief Sonia Gandhi, and other opposition parties, demanded Shah’s resignation over his failure to maintain law and order.

People have drawn a similarity between Prime Minister Narendra Modi’s conniving role during Delhi’s anti-Muslim pogrom and his infamous role during the 2002 Gujarat pogrom when he was the chief minister of the state. Shah is criticised for following Modi’s footsteps and also for not doing his constitutional duty. But did Shah fail to perform his role? Is Shah really bothered about the constitutional role or is he on a different mission altogether?

If Delhi’s anti-Muslim pogrom is critically analysed, then one would come to the conclusion that such mayhem couldn’t have taken place spontaneously, as Shah said his professional assessment found, but only through meticulous planning done by some shrewd minds and not rumbustious teenagers. In case there has been planning and strategising, then the internal intelligence wing — the Intelligence Bureau (IB) — must have received a hint, and such report must have gone to the Union home ministry. The inaction on such IB reports show that Shah didn’t fail, he actually did what he was supposed to do — turn the Delhi Police into an appendage of the Hindutva fascist RSS.

Shah got the home portfolio from Modi for the second time in his life. Earlier he got the home portfolio when Modi was the chief minister of Gujarat. Due to brave investigative journalism by Rana Ayyub, Shah was sent behind the bars for his role in murdering Ishrat Jahan, Sohrabuddin Sheikh and Tulsi Prajapati through fake encounters. The Congress party’s fall from power weakened the case against Shah, and when the judge of his case, BH Loya, died in mysterious circumstances in 2014, Shah got scot-free when a new judge took up his case. Notorious for his nexus with organised crime cartels and his ability to use the police and other agencies for vendetta, Shah is the right fit for the home minister’s post in Modi’s cabinet.

When people like Shah, along with Union minister Anurag Thakur, member of the Parliament Pravesh Varma, Kapil Mishra and Uttar Pradesh Chief Minister Yogi Adityanath were spewing venom against the Muslim women protesting against the Citizenship (Amendment) Act, 2019 (CAA), and National Register of Citizens (NRC) in Delhi’s Shaheen Bagh while campaigning for the BJP in Delhi Assembly election 2020, they weren’t doing it with a sole aim of sweeping the polls but were trying to seed bigotry deep inside the backward class Hindu (OBC) community and the ostracised dalits. It’s not a mere coincidence that the very northeastern Delhi, where these BJP leaders spewed maximum communal venom, became the epicentre of one of Delhi’s severest pogroms, after the anti-Sikh pogrom of 1984, which killed more than 60 people, according to unofficial sources (official tally is 42 casualties until late evening of 28 February), and severely injured more than 300.

The speeches were made with a specific plan. The impunity with which Mishra mobilised feral supporters on Sunday, 23 February, at Maujpur, in the presence of Shahdara DCP Amit Sharma, was possible because of the state’s patronisation. From 24 February to 26 February, the Hindutva fascist thugs were escorted by the Delhi Police, unapologetically, in full public view. It’s the Delhi Police that shot teargas shells and fired bullets, apart from resorting to baton charge, targetting the Muslims who were trying to resist the onslaught on their houses and mosques. All these happened not because Shah was nonchalant, rather he monitored the situation closely and allowed the pogrom to spread like cancer throughout northeastern Delhi.

Shah’s agenda was to ensure that the Delhi Police will work as an auxiliary unit of the RSS goons until US President Donald Trump’s visit was on. The BJP exhibited to Trump, its master, the party’s ability to polarise the society and incite communal pogroms against Muslims to drive the majority of the minority community to sheer destitution by destroying their sources of livelihood and even their abodes. The promise of generating cheap labour through such pogroms did magic and Trump hailed Modi’s role in India, keeping his eyes closed to the atrocities committed against the Muslims 22 km away from his gala reception.

The Delhi Police allowed the arson to continue and aided the bloodthirsty teenagers — indoctrinated and funded by the RSS’s terrorist cells — to kill, loot and ransack Muslim houses and establishments. This was Shah’s role, especially at a critical juncture as the BJP has to discredit and vilify the anti-CAA and anti-NRC protests, which are ongoing since 15 December 2019 at Shaheen Bagh of southeastern Delhi, whose replica came up at different other places of Delhi and India as well.

For Shah, the anti-Muslim pogrom in northeastern Delhi, where a large number of migrants from Bihar and eastern Uttar Pradesh — called Poorvanchalis — live, was a crucial project. The BJP and the RSS are keen to use Islamophobia intensely in Bihar, which will go to polls later this year and reap rich yield from the state. Shah’s plan is to implement the same model of anti-Muslim pogroms at different locations, especially at Shaheen Bagh, where the protests against the CAA-NRC have organically grown in the last two months. The Delhi anti-Muslim pogrom didn’t end the ordeal for the Muslims, rather, until the forthcoming Ram Navami festival, communal conflagrations will take place in different places.

Shah has passed his test as a master riot monger. He will be accoladed accordingly by the RSS and big corporates for his notorious role. So would be Mishra, who will aim for bigger roles in Delhi. It’s only the urban poor Hindus — especially ostracised dalits and OBCs — and the poor Muslims who will continue to lose everything, including lives, in such communal pogroms. What’s just another day for Modi, Shah and their coterie of hate-mongers at work is actually a day of doom, irrecoverable losses and death for the poor, marginalised people.