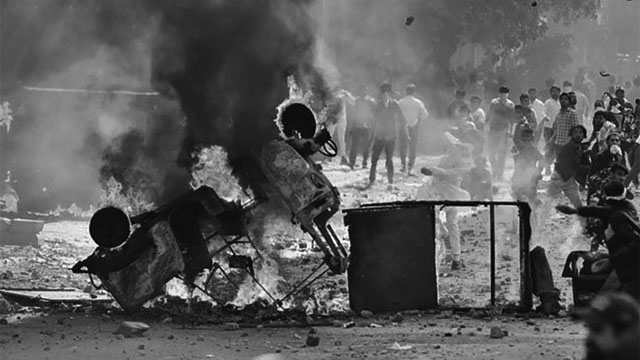 Delhi’s state-sponsored anti-Muslim pogrom has caused a total loss of a few billion rupees within three days, if not more, though the real estimates will be only known when proper auditing is done to assess the volume of the losses. While many are blaming Prime Minister Narendra Modi‘s Bharatiya Janata Party (BJP) for orchestrating this mayhem through its rabble-rousers like Kapil Mishra, Anurag Thakur, Yogi Adityanath, etc, who went to the affected areas during the Delhi Assembly election campaigns to incite Hindus against Muslims, to divert attention from the crisis-ridden Indian economy, they are unable to see that this pogrom will eventually help the big corporate donors of the ruling party and its parental body Rashtriya Swayamsevak Sangh (RSS). There is always economics of communal violence and it’s imperative to analyse it to see who reaped the real benefits of the violence.

The economics of communal violence in Delhi, heralded by the RSS’s men and politically-optimised by the BJP to create an optics of “punishing” Muslims for their self-assertion, has multiple dimensions.

The economics of northeastern Delhi

Due to highest concentration of low-income groups, the literacy rate of northeastern Delhi was 82.80%, which is less than Delhi’s average of 86.34%, and it makes this region a breeding ground for bigotry and fanaticism, especially with a large contingent of RSS’s proselytisers operating at the grassroots to recruit, train and deploy young men as combatants.

While no new economic survey is done in Delhi, the last report from 2013 shows that northeastern Delhi had the second-largest concentration of handlooms and handicrafts establishments after central. It had the highest number of women entrepreneur-owned enterprises, 11,059, though it’s not known how many of these closed due to the demonetisation exercise and Goods and Services Tax (GST) rollout.

However, northeastern Delhi’s entrepreneurs were mostly those who didn’t enjoy any institutional financing, with 8,689 self-financed enterprises and 13.55% were owned by the owners who themselves worked in them with a maximum of one hired employee. Northeastern Delhi also had the highest density of establishments in Delhi, 21.66%, while it had the lowest proportion of establishments that existed outside the owner’s home, 25.6%, which means the majority of the establishments were home-based.

The majority of the people of northeastern Delhi are from eastern and western Uttar Pradesh and even many are from Bihar. The majority of areas, except a few, are uniquely mixed community areas, where Hindus and Muslims have lived together for years, side-by-side. Cases of Hindu-Muslim dichotomy aren’t new in the area, but they didn’t experience a pogrom ever. The anti-Muslim pogrom wasn’t a sudden affair. The preparations were underway for a long time, and it materialised after the Delhi Assembly election with the help of fiery speeches made by rabble-rouser BJP leaders. If there is a factor that provided the Hindutva fascists with the required manpower, then it’s the depreciating economic condition of India in general and Delhi in particular.

The economics of communal violence in Delhi

One must understand that no communal riot or pogrom happens spontaneously unless there is a groundwork done and all factors are properly organised by the perpetrators. There are huge finances and logistics involved and without proper organisational capacity, no such act of crime can be committed.

For the anti-Muslim pogrom in northeastern Delhi, the RSS mobilised a large number of teenagers from 15 years and above. Most of them were brought from western, northwestern and outskirts of Delhi. A large number of local RSS workers collaborated with them, but played the role of guides in the unknown terrains only, pushing the onus of violence on the shoulders of these teenagers.

From their appearance, most of the Hindutva thugs in their teenage gave the impression that they are from poor families and a huge amount of money had lured them to take part in such a pogrom. They are mere pawns, footsoldiers tempted with money and seduced with impunity.

Modi and the RSS leaders know that even if any of these teenagers are arrested, then no court can give them harsh punishment due to their age.

While the BJP pays its workers in West Bengal anything between Rs 350 per day to Rs 10,000 per day for propaganda work and banal chores, it’s easily understood that they have shelled a huge amount to mobilise more than 5,000 to 6,000 teenagers from poor dalit and OBC households to carry out the Delhi pogrom.

Now the question is, why would the BJP spend millions to instigate a communal pogrom after the Delhi Assembly election? The answer lies in the economy of the region, its absolute unorganised nature and the possibility of adding a large number of semi-skilled and unskilled people to the cheap labour pool, which the BJP and the RSS want to present to their big corporate donors. For the BJP and the RSS, the pogroms not only polarise the upper-caste Hindus, along with OBCs and dalits, such notoriety also helps in ruining the livelihoods of the poorest of the poor.

The destruction of Muslim-owned and dalit women-owned establishments will create a business opportunity for the upper-caste Hindu traders and capitalists who would replace such establishments with theirs. The total control over trade and commerce will go to the upper-caste Hindu capitalists from the marginalised communities and thereby increase the popularity of the BJP and the RSS. More money will pour in for these organisations to expand, recruit and launch new, larger pogroms.

Most of the Muslims, who run unorganised units or work in them, are generally semi-skilled or unskilled. They won’t get employment anywhere else easily. As most of the establishments are small, mostly with one employee or the owner only, therefore, they work in an unorganised pattern, mostly dealing in cash and most of their inventory and assets remain uninsured. In case of any mishap, like a communal pogrom, they not only lose their house and belongings but also their savings for the rainy days, which cripple them economically and render them as unskilled, cheap labour in the market.

For the BJP and the RSS, such a situation, which mostly Muslims suffer due to their socio-economic position and lack of political power, becomes an ideal situation, as their corporate donors get a large pool of unskilled, cheap labour. As these hapless poor masses are compelled to sell their labour for a living at a cheaper wage, the wages of those who aren’t compelled, or who didn’t suffer a pogrom, especially the dalits and OBCs of other parts, will also fall for the same work, causing the wages in general to fall, which will provide excellent opportunity to big corporate houses to maximise their profits.

The economics of communal violence in Delhi is proving the fact that these communal pogroms aren’t just state-sponsored to terrorise the Muslims, but also corporate-funded to ensure a steady pool of dislocated, disempowered, distressed labouring poor, who’d sell labour for cheap to the big corporate houses or their appendages. The Modi regime’s National Register Citizens (NRC) exercise wants to create a massive pool of cheap and stateless labour in the country, which will affect the existing wages significantly and bring real wages down. These communal pogroms, at the scale of Delhi’s, help the corporate-Hindutva nexus to do mini-NRCs, and earn huge return on investment on their vitriolic campaigns.