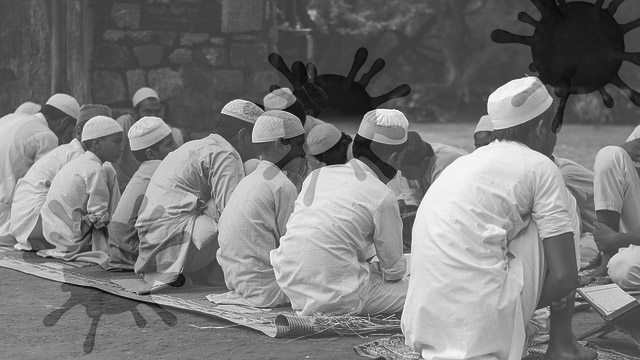 The Coronavirus (COVID-19) outbreak is successfully transformed into an Islamophobic tirade by the Hindutva fascist camp led by the Rashtriya Swayamsevak Sangh (RSS), which is helping Prime Minister Narendra Modi‘s ruling Bharatiya Janata Party (BJP) to evade tough questioning on its dismal performance in handling the threat. After the Delhi Police evacuated 1,000 Islamic preachers living in the Alami Markaz Banglewali Masjid — the global headquarters of the Tablighi Jamaat— located in South Delhi’s Nizamuddin, also called Markaz Nizamuddin, and 24 among them tested positive for COVID-19, blaming Muslims for the spread of Coronavirus in India became viral on mainstream and social media.

Modi’s toady media outlets, his bootlicker television anchors and the BJP’s notorious IT Cell started amplifying bush telegraphs to link the pandemic’s outbreak in India with a “pan-Islamic conspiracy”. The narrative was set for the mainstream press to shift focus on the Muslims, to demonise them, as the Shaheen Bagh protest was demonised earlier as an epicentre of Coronavirus outbreak, without any substantial evidence while using this Islamophobic hullabaloo to cover up Modi’s utmost failure in curbing the epidemic or resolving the humanitarian crisis caused by the unprecedented migrant labour exodus from cities as millions walk towards their villages fearing an uncertain future.

The Tablighi Jamaat is a conservative Islamic sect and the Alami Markaz Banglewali Masjid is more than 100 years old. The institution held a religious congregation from March 13th to March 15th 2020, attended by 8,000 missionary delegates from India and from countries like Bangladesh, Indonesia, Malaysia, Saudi Arabia and Turkmenistan. A few of them are suspected of having contacted COVID-19 earlier. The delegates started arriving from March 1st itself when the Modi regime was absolutely nonchalant regarding the COVID-19 outbreak. The first case of COVID-19 in India was detected on January 20th and the government had no testing and screening facility to scan people entering India from foreign countries even after that. The foreign delegates entered the country with valid visas and were not scanned properly at the airports. Similarly, thousands of non-Muslims who came from foreign countries, especially the affected ones, at that time, were not scanned properly as well.

The Markaz Nizamuddin administration has clarified that the main event was held for two days, at a time when the Union Ministry of Health and Family Welfare’s Joint Secretary Lav Agrawal told the press that “Coronavirus outbreak is not a health emergency”, and most of the foreign delegates left soon. By March 21st, only 2,500 were held in the Nizamuddin centre due to closure of railways and flight services. As there was a nationwide “Janata Curfew” on March 22nd, they couldn’t return. Before the “Janata Curfew” ended, Delhi Chief Minister Arvind Kejriwal announced a lockdown from March 23rd to March 31st. The Markaz administration managed to send back 1,500 people through whatever transport options were available and on March 24th evening, Modi announced a 21-day-long lockdown, asking people to stay where they are and avoid travelling. This made the last 1,000 stranded at Markaz Nizamuddin.

The Tehsildar (revenue officer) of the Delhi Government visited the centre on March 25th with a medical team and checked the centre and some of the residents. On March 26th the SDM, who didn’t respond to the application seeking permission to ferry the stranded visitors, went to Markaz Nizamuddin centre and called the administration to meet the District Magistrate (DM). The Markaz Nizamuddin administration requested the DM for the vehicle permission but to no avail. On March 27th, another six people were taken for a medical check-up.

On March 28th, the SDM and a team from the World Health Organization (WHO) visited the Markaz Nizamuddin. The WHO team checked the people and 33 were taken for further medical checkup to the Rajiv Gandhi Cancer Hospital. The same day, Assistant Commissioner of Police issued a notice threatening legal actions against the Markaz Nizamuddin administration. The administration replied to the letter on March 29th, according to their press release.

Delhi Chief Minister Kejriwal asked the police to file an FIR against the Markaz Nizamuddin administration relying solely on social media stories, which have magnified the situation and demonised the Muslims using sheer lies to spread paranoia. To appease his Aam Aadmi Party’s (AAP) Hindu vote bank and to exhibit his anti-Muslim fervour, Kejriwal plunged into the murky communal mire to do Islamophobic mudslinging. AAP leaders too toed the line of Kejriwal and started blaming the entire Muslim community for the act of the Tablighi Jamat.

It’s true that the Tablighi Jamat has jeopardised the health of many and took a wrong decision by organising a congregation at a time when “social distancing” has been vehemently advocated by the WHO. However, as a responsible government, which is always in a paranoid mode vis-a-vis Muslims, why didn’t the Modi regime’s police or Kejriwal’s administration prevent the congregation from taking place at the first place? Why did the intelligence agencies fail to inform the government? If the Markaz Nizamuddin programme violated the restrictions on assembly of more than 200 people issued by Kejriwal’s government, then why didn’t the government act then? Why the administration had to wait for two weeks to take action?

It’s not that the police and the administration didn’t crack the whip on the Muslims before the Markaz Nizamuddin incident under different pretences of combatting Coronavirus outbreak. The police in different states committed gory atrocities against the Muslims who assembled for prayer in mosques. While people in temples were cajoled to leave, in mosques the police resorted to baton charge. But the institutional mode of vitriol began only when the Markaz Nizamuddin incident was amplified by the mainstream press followed by the RSS’s propaganda. The focus of the press is swiftly and very cunningly shifted from the Modi regime’s failures in safeguarding India from the COVID-19 and the massive migrant worker exodus that’s fuelled by an ill-planned lockdown imposition to Islamophobic ranting and vilification.

Can the Modi regime be questioned on why the Akhil Bharatiya Hindu Mahasabha was allowed to organise a Gaumutra — cow urine — drinking party in the heart of New Delhi on March 14th? Why there was no outburst on Uttar Pradesh Chief Minister Yogi Adityanath conducting a religious ceremony in Ayodhya in the midst of the nationwide lockdown? Why the government didn’t crack the whip on thousands of those who rallied on the streets at 5pm on Sunday, March 22nd, clanging their utensils and clapping to celebrate the defeat of Coronavirus through “Janata Curfew”? Why the BJP leaders in Madhya Pradesh were allowed to assemble and celebrate the toppling of the Congress party’s government at the same time? Why those BJP bigshots who partied with Kanika Kapoor, the singer who tested positive for COVID-19, aren’t bashed by the hyper-nationalist press?  Hindutva fascists and their lapdog television anchors have got an excellent opportunity to distract the people from the real issues by communalising the COVID-19 outbreak issue and the utmost failures of the Modi regime to tackle the pandemic outbreak as well as the plight of the migrant labourers and poor, who are treated worst than cattle right now.

It’s imperative to counter this bunch of lies and Islamophobia peddled around Markaz Nizamuddin by exposing the hypocrisy, the sheer Islamophobic bigotry of the RSS-BJP and their sycophants, through which they are trying to conceal the institutional murder of 22 poor Hindus, who were walking from Delhi to their native villages in Uttar Pradesh and Bihar, the chemical fogging of the poor Hindus in Bareilly, the police atrocities on poor dalits, tribal people and backward class Hindus in all cities. This facade of lies must be torn off and the Modi regime must be held accountable for its failures, goof-ups and debauchery. It’s the labouring poor people, who must reclaim their democracy to ensure that both the Coronavirus and the communalism virus are fought effectively and defeated.