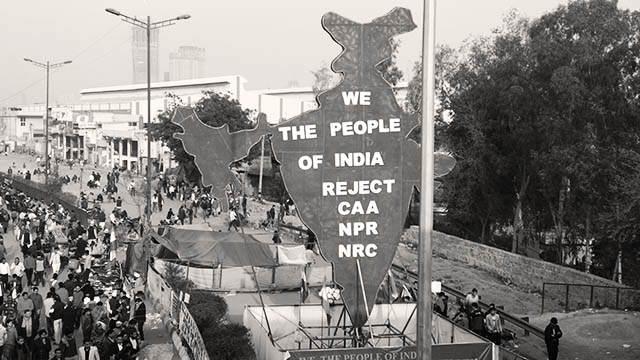 After taking an extension in July, Prime Minister Narendra Modi-led Bharatiya Janata Party (BJP) government failed to publish the Rules of the contentious Citizenship (Amendment) Act, 2019 (CAA 2019), which isn’t highlighted in the press. This is the second instance that the Central Government failed to publish the Rules of CAA 2019 after missing the deadlines earlier in June. There is no intimation when the Rules for the contentious Act may be published by the Modi regime.

The CAA 2019 was passed in December 2019 and enacted in January 2020 after the President’s assent. The CAA 2019 is a docile tool for the BJP to lure the non-Muslim victims of partition in more than 17 states, especially Assam, Punjab, Tripura and West Bengal, by dangling the bait of citizenship before them. Though the CAA 2019 is portrayed as a communally divisive law by many opponents of the Modi regime, who claim the law will discriminate against Muslims and protect only the non-Muslims from an obnoxious National Register of Citizens (NRC) drive, it has no such provisions.

The Rules of the CAA 2019 aren’t published because it will expose the hollowness of the much-hyped law that played a major role in dividing society and polarise the Hindus against the Muslims. If the BJP publishes the Rules of the CAA 2019, the people, especially the victims of partition, who have been supporting the Modi regime expecting a resolution to their citizenship limbo, will desert the ranks of Hindutva fascism and oppose it. This fear is prohibiting the BJP from publishing the Rules of the CAA 2019 before the Assam and West Bengal Assembly elections in 2021.

Rules are the executive’s guide to implementing a law passed by the Parliament. The executive details the rules for any act and the same goes through the Parliament for verification of its conformity with the essence of the act. A rule can be published before a bill is tabled, at the time of its tabling or after the bill is enacted. The Rules of the Citizenship (Amendment) Act, 2003 (CAA 2003), which provisioned the NRC through the introduction of the concept of “illegal migrant” and the draconian section 14A, was published eight days before the Bill was tabled in the Parliament in December 2003. But for the CAA 2019, it’s kept in the cold storage.

What’s the BJP’s fear in publishing the Rules of the CAA 2019?

We don’t have any public document that can let us see what sort of measures are taken by the Modi regime on the Rules of CAA 2019. However, there is an indication in the Joint Parliamentary Committee’s Report on Citizenship (Amendment) Bill, 2016 (CAB 2016), which later became CAA 2019, where the representative of India’s internal intelligence agency, the Intelligence Bureau (IB), representing the Ministry of Home Affairs (MHA), indicated that a Standard Operating Procedure (SOP) is being prepared for the implementation of the law. Such an SOP can reveal much about the Rules of the CAA 2019.

The IB’s submission on behalf of the MHA to the JPC, as mentioned in point 2.14 of the Report, says:

“…As per the Standard Operating Procedure (SOP) under preparation by MHA, for an applicant who applies with an affidavit mentioning that he/she was compelled to migrate to India due to religious persecution or fear of religious persecution, alongwith other supporting documents, a detailed enquiry will be conducted by Foreigners Regional Registration Office (FRRO)/Foreigners Registration Office (FRO) concerned to verify his/her claim. If the affidavit is not supported by documents, the case will be referred to Foreigners Tribunals to be constituted for this purpose under the Foreigners (Tribunals) Order, 1964 for verification of the claim regarding religious persecution.”

Now if we read this point by the IB with the MHA’s clarification in the point before this, ie, 2.13, about what constitutes as evidence of “religious persecution”, which makes an individual from the six non-Muslim communities, viz Hindu, Buddhist, Sikh, Jain, Parsi and Christian, eligible for citizenship, then we will know how hard it will be for the applicants to provide “supporting documents” along with their affidavits on religious persecution to the FRRO/FROs.

2.13 Asked to state the mechanism available with the Government to establish religious persecution in a foreign land, the MHA responded as under:

“Inputs from security agencies alongwith other corroborative evidence in the print/electronic media would help to establish religious persecution in a foreign land.”

This means one must submit the evidence with print/electronic media’s coverage to prove that religious persecution took place and that will be verified by the Research & Analysis Wing (R&AW) operatives in the respective country. As it’s quite evident that the R&AW won’t have millions of agents to exclusively verify incidents of religious persecution that took place six years to six decades ago, the queue will get longer, and the wait will be prolonged for citizenship.

Moreover, these security agencies will further verify the record of each “migrant” to ensure no criminal cases are lodged against the applicant and that the applicant doesn’t pose threat to India’s national security. This will eventually prolong the process farther. The BJP won’t divulge these details to the hapless victims of persecution, whom it’s luring with the bait of the CAA 2019 and titillating with Islamophobia. But if the applicants fail to submit adequate evidence required by the government, then they will be referred to “Foreigners Tribunals to be constituted for this purpose under the Foreigners (Tribunals) Order, 1964”, meaning they will spend rest of their lives in detention centres.

These statements reveal that no one is supposed to get citizenship under the CAA 2019, a modified version of the CAB 2016, which only excludes the Sixth Schedule Areas from its purview.

How many people will benefit from the CAA 2019?

According to IB’s statement to the JPC, mentioned in point 2.17, only 31,313 people will benefit from the Act immediately. This means the Central Government had earlier identified the beneficiaries and then brought the Bill to the Parliament. On asking whether anyone else apart from these 31,313 will be getting citizenship under this Act, the IB said:

This clearly states that the CAA 2019 is going to be a closed-door law, which has already finalised the beneficiaries, while created hassles for new applicants. As the IB informed, that it’s “for those who have applied and who have claimed that they have been persecuted in their respective country.” This law is for those who have applied and exempted by the Passports (Entry into India) Rules, 1950, and Foreigners Act, Rules 1948, through the amendments of 2015 and 2016. But the BJP has managed to portray it as a magic shield for the Hindus, especially the Dalits and other backward classes, without revealing an iota of truth.

The BJP’s modus operandi on the CAA 2019 rules

The BJP knows that any attempt to publish the Rules of the CAA 2019 may end up causing ignominy for the party. Moreover, the legislative committee to which the Rules will be sent doesn’t have a BJP majority. It’s headed by the YSR Congress and has the majority belongs to the Congress party and Dravida Munnetra Kazhagam (DMK). Both Congress party and the DMK opposed the CAA 2019 when it was passed in the Parliament and supported the movements against the law. In such a situation, the BJP can’t risk leaking of the Rules before the Assam and West Bengal Assembly elections as that may become a cause for the party’s setback.

To avoid such a situation, the BJP may come up with such Rules of the CAA 2019 that will be inconsistent with the Act. Maybe it will bring up Rules that will show that citizenship can be granted easily and, then, there will be litigations against such Rules as they don’t conform to the law, resulting in a series of legal battles. Some proxies of the BJP itself can file litigations against the Rules as their sole motive is to implement CAA 2003, which has NRC provisions, rather than CAA 2019, which was brought to keep the non-Muslims away from anti-NRC movements.

Through such litigations, the BJP can claim that it brought a law to provide citizenship to the aggrieved victims of partition from non-Muslim communities, but the “seculars” and Muslims stopped it through legal hurdles. The BJP will shift the onus on its opponents and vilify them as anti-Hindu and anti-refugee to garner the votes of these people or to use them as Hindutva fascist pawns.

Moreover, as the electoral roll correction will take place from late November onwards in Assam and West Bengal, there is a chance that a lot of people, especially Bengali Dalits or Namasudras will find their names struck off from the electoral roll. This will help the BJP to create a D-Voter or doubtful voter list and reduce the number of voters from the lower and out castes. It will reduce the risks for the party in the assembly elections in these states. Once categorised as a D-Voter, a person will be served a notice by the Foreigners Tribunals.

What is the way ahead?

It’s important to defeat the BJP by exposing its anti-refugee core. Recently, the BJP’s member of Parliament from West Bengal, Shantanu Thakur, who belongs to the politically-crucial Matua community––a Bengali Namasudra community who suffered the most due to the partition––confessed to his supporters that the BJP has cheated him and the community by promising citizenship, which isn’t coming. Though Thakur may be trying to bargain with the BJP before the polls for better privileges for himself and his coterie, his confession to the Matuas showed that there is no hope for citizenship for the community.

As the CAA 2019 is exposed as a hollow law with no benefit for anyone except the 31,313 people who have registered themselves as victims of religious persecution, the BJP’s attempt to divide the masses to weaken the anti-NRC movement, which demands the scrapping of the CAA 2003 and CAA 1986, must be exposed to the non-Muslim victims of Hindutva fascism’s proselytization. The demand for a new, comprehensive citizenship law, which will secure the rights of everyone, including the marginalised people, must be vigorously raised to corner the BJP. As the Rules of the CAA 2019 can’t be easily published, the BJP will remain on backfoot over the issue. This is one of the major reasons it has withdrawn a campaign on the law during the Durga Puja festivities in West Bengal. As the BJP would try to escape the discourse over the law and the NRC, the people, especially the Namasudras, must expose the fallacy that lies in the description of the contentious amendment and turn the spearhead of their movement for citizenship against the CAA 2003 and CAA 1986 by raising the demand for a comprehensive, new citizenship law to protect the people’s interest. Only such a movement can stop the juggernaut of Hindutva fascism in Assam and West Bengal.