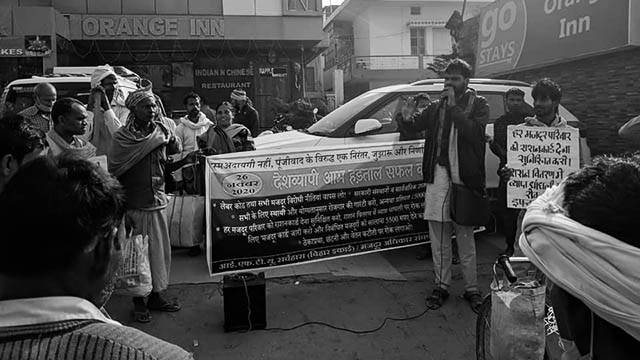 The all-India strike on November 26th has thrown a stern challenge to Modi’s Bharatiya Janata Party (BJP) and its lackeys as well as big corporate donors, as by using the pretext of the COVID-19 pandemic they want to disrupt and pulverise the resistance offered by the strike to the juggernaut of neo-liberal economic aggression, which is enriching the rich and dragging the common people, especially the workers and farmers down the abyss of a severe crisis.

The major demands of the CTUs include immediate withdrawal of the anti-farmer and anti-labour bills, Rs 7,500 to be deposited in the bank accounts of all non-tax paying families, provision of 10 kilograms of food grains every month to families in need, expansion of the Mahatma Gandhi National Rural Employment Guarantee Scheme (MNREGS) to provide 200 workdays per year with increased wages and implementation of the scheme in urban areas also, an end to the privatisation drive in defence, railways, ports, aviation, telecom, power, mining and finance sectors, end to forced lay-off of employees in the public sector undertakings (PSUs) and provision of pension for everyone.

Though the Union government, led by Modi’s BJP, is trying to create cheap labourers through disenfranchisement of millions of poor in the country through the National Register of Citizens (NRC), provisioned by the Citizenship (Amendment) Act, 2003 (CAA 2003), the CTUs have ignored raising the demand of scrapping the draconian exercise, which is undertaken using the National Population Register (NPR) drive using biometric-based identity system Aadhaar. In West Bengal, different outfits fighting for citizenship rights have supported the all-India strike on November 26th but have also criticised it for not including the demand to scrap the NRC and its root, CAA 2003.

Since usurping power in May 2014, the Modi regime has unleashed a reign of terror on the common people of India. By accelerating the pace of liberalisation, privatisation, and globalisation drive initiated by the former prime minister and World Bank’s protégé, Manmohan Singh, Modi and his cabal ensured that all PSUs, built with public money, are given away to the big corporate donors of the BJP so that they can profiteer from them at the hour of an immense crisis of global capitalism.

Using the pretext of combatting the COVID-19 pandemic, the Modi regime imposed a lockdown to rapidly sell-off all PSUs, open up sectors like coal mining to private corporations and rolled out plans for railway privatisation, without fearing a public backlash. The Modi regime also allowed corporates in the farm sector, along with a green signal to hoard and create an artificial shortage of essential foodstuff in the retail market to companies like Reliance’s JioMart, etc.

Through disastrous policies like the demonetisation, claiming it will curb unaccounted money and terror-funding, the roll-out of the Goods and Services Tax (GST), the merger of public banks to combine their non-performing assets (NPAs) worth trillions, and allowing big corporates to evade repaying their debts as well as providing them tax holidays, the Modi regime further pushed the Indian economy into an abysmal crisis since the financial year (FY) 2016-17. Such policies have made the banking sector vulnerable, as one after another private bank as well as public sector bank is collapsing due to rising NPAs.

By the FY 2018-19, the unemployment in India rose to 45-year-high, as Modi’s poll promise of providing 20m jobs a year for five years fell on its face. Despite a huge economic crisis paralysing sectors like fast-moving consumer goods, automobile, banking and finance, and the real estate sector, the Modi regime took no concrete measures to boost demand in the economy. It didn’t invest in PSUs to generate employment for the people, instead, it laid off people from PSUs like BSNL and Indian Railways. The BJP government simply relied on supply-side measures, while, at the same time, liberalised the economy further and removed all barriers for the corporates to compete with the PSUs in the strategic sector.

Not only did the BJP-led government sold off India’s public assets at a throw-away price to big corporate houses, but it also brought anti-worker labour codes that restricted the working class’s right to form a union, increased the maximum working hours to 12 hours, and allowed major corporate houses to follow a liberalised hire & fire policy, which increased their profiteering opportunities. It also institutionalised the role of feudal usurers in agriculture through the new anti-farmer bills.

The all-India strike on November 26th fights against these exploitative labour reforms and determinedly resists the Hindutva fascist juggernaut of the Modi regime and the BJP. This strike action is one of the rarest opportunities for the working class to make their grievances public. They are using the all-India strike on November 26th to not just fight their selfish battle, but they have adopted a unique approach, which is cementing the ties between the workers and peasants.

A frightened BJP has unleashed brutal police repression to stop the farmers’ cavalcade from reaching the national capital. At BJP-ruled Haryana as well as at the entrance of Delhi, the Modi regime’s police have been trying to prevent the farmers from entering the city, but the resilient and angry farmers are determined to march ahead. The police atrocities on the farmers, for whom Modi and his coterie would occasionally shed crocodile’s tears, evoked strong pro-farmer emotions all over India. The farmers’ march to Delhi has boosted the spirit of the working class organising the all-India strike on November 26th.

A strike is indeed a part of the protracted fight against the corporate-sponsored fascist Modi regime’s tyranny and not the solution itself, yet the all-India strike on November 26th is bringing up the issues that remained buried under the mainstream media’s discourses on COVID-19, vaccine development or war with Pakistan and China. The real issues related to the lives and livelihood of the working class and the farmers, who constitute 85% of the population, is now on the forefront again.

This all-India strike on November 26th, despite its shortcomings, will be a training module for the working class and the farmers’ resolute struggle against the BJP’s atrocities will certainly strengthen their commitment, especially of the poor and marginal farmers, to fight the fascist regime. Each such moves will pave the way to dig the grave for the fascist forces through massive people’s political struggle.