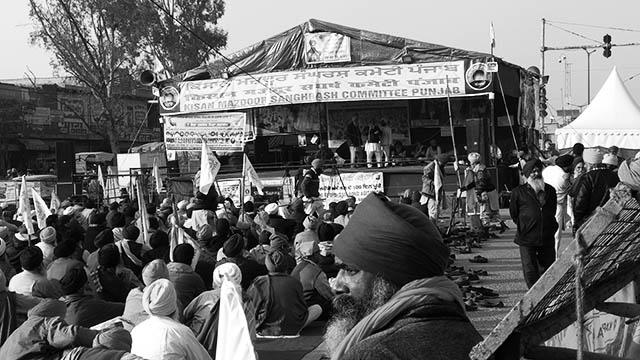 A feral gang of 200 goons, armed with rods, sharp weapons and petrol bombs attacked the farmers protesting Prime Minister Narendra Modi’s pro-corporate farm laws at Delhi’s Singhu border on Friday, January 29th 2021. The attackers, who called themselves “locals” accused the farmers of being “anti-national” and demanded their forceful eviction from the National Highway 44 (NH 44), where they are protesting against the laws since November 26th 2020.

The Singhu border, which is barricaded by the Delhi Police, turned into a battlefield when these thugs, whom the farmers called “hired goons” of Modi’s Bharatiya Janata Party (BJP) and its parental body Rashtriya Swayamsevak Sangh (RSS), launched a concerted attack on the farmers in open connivance with the police. It’s alleged that these self-styled “locals” were raising “pro-Delhi Police” slogans and were supported by the police.

The Delhi Police also unleashed terror on the farmers who tried to resist this onslaught on them. One man is arrested by the Delhi Police for allegedly attacking the station house officer (SHO) of Alipur Police Station, Pradeep Paliwal. The locals, who were seen wearing saffron scarfs around their necks, also appeared at the spot to instigate trouble on Thursday, 28th January. But then they failed to create a ruckus. The template used in Singhu border by the BJP and the RSS matches ditto with the one they used to pulverise the protest movements against the National Register of Citizens (NRC) by the Muslims in early 2020.

It was a year ago, on January 30th 2020, a Hindutva apparatchik named Gopal, who called himself “Rambhakt”—the disciple of Hindu deity Rama—shot a Kashmiri student participating in an anti-NRC rally that commemorated the assassination of MK Gandhi by Hindutva fanatic Nathuram Godse. Coincidentally, this new version of Godse, Rambhakt Gopal also raised “pro-police” slogans while shooting the Kashmiri student with utmost impunity in front of a large contingent of policemen near Delhi’s Jamia Millia Islamia University.

Now, these new Rambhakt, “nationalist” “locals”, who attacked the farmers—mostly Sikhs—at Singhu border, were also raising “pro-police” slogans. This is an absolute new in India, or for that matter in the world, as criminals are seen hallowing the police while operating in connivance with them against the common people. Unlike the Muslims, who didn’t dare to offer active resistance, due to their insecurities and disempowered political status, the farmers obstinately resisted these goons and defeated them.

In February 2020, Kapil Mishra, a rabid Islamophobic hate-monger and Hindutva rabble-rouser instigated a rumbustious mob targeting women protesting the NRC drive and Modi’s contentious citizenship matrix at northeast Delhi’s Jaffrabad and Chandbagh areas. This triggered one of the goriest atrocities against the minority Muslims in India. The pretext of “clearing the roads” by evicting the women protesters became the focal theme of Mishra’s 2020 operation. At present, the “locals”, who attacked the farmers, have also used the subterfuge of “clearing the roads”. These “locals” are claiming that the blockade of the NH 44 is causing them immense problems and that the farmers are “anti-nationals” as they have allegedly “insulted the national flag”.

As the RSS and the BJP are using the same template, which they used in the 2020 Delhi anti-Muslim pogrom, against the farmers and spreading anti-Sikh xenophobic vitriol, it’s getting clearer that the Modi regime has some severely obnoxious agenda on its list. On the evening of January 26th, a frightened Union Home Minister Amit Shah held a meeting with the Delhi Police chief and other security agencies at his residence and charted a strategy to use state terror, false cases and atrocious media shaming to diminish the legacy of the heroic farmers’ struggle. Using the “nationalism” bogey, the BJP, which sold the Mughal-era iconic Red Fort to big comprador capitalist Dalmiya Bharat Group, is now cribbing over a few Sikh farmers hoisting the Nishan Sahib on an empty flagpole at that very spot. But the same BJP has no inhibitions in attacking Muslims protesting the NRC waving the national flag.

Modi’s unapologetic anti-farmer standpoint and Shah’s usage of state power to aid the BJP’s obnoxious agenda has emboldened the docile tools of Hindutva. After the Singhu border clash, it’s evident that the BJP won’t sit quietly and will relaunch bigger attacks, backed by the state. The BJP-RSS can also use communal enmity between Sikhs, Jats and Muslims to flare up conflict. But it’s to be seen whether the saffron camp can survive the anti-establishment waves in Haryana, Punjab and western Uttar Pradesh against its tyranny through such manoeuvres.